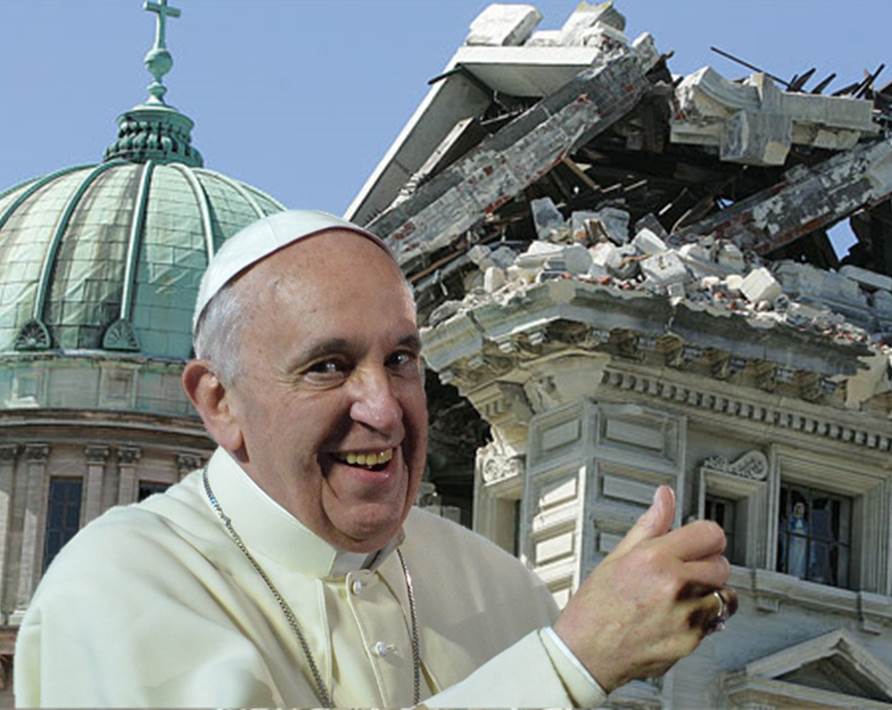 The big buzz in traditional Catholic circles over the past week concerns a recent report (courtesy of LifeSite News) that Francis, according to unnamed sources in Rome, may be plotting to overturn Summorum Pontificum.

According to the report, “liberal prelates inside the Congregation for the Doctrine of Faith were overheard discussing a plan ascribed to the Pope to do away with Pope Benedict’s famous document…”

Specifically, it is alleged that Francis’ plan is to establish the SSPX as a Personal Prelature, at which point he will proceed to abolish Summorum Pontificum thereby constraining the Traditional Roman Rite within the Society, and this only after Benedict dies.

The report further suggests that Cardinal Muller may have acted to save the day by way of his June letter to Bishop Fellay outlining requirements that effectively derailed any chance that the SSPX and Rome might come to an agreement:

The LifeSite source suggested that the May 20 letter by Muller perhaps was written because he knows what Francis was up to and wanted to avoid the plan to bury Summorum Pontificum with Pope Benedict. “It’s directed not so much against Fellay but against the agreement,” said the source. “Pope Francis was very angry that document came out from Cardinal Muller and some say that’s why he made the decision to dismiss him.”

I hate to disappoint those who may wish to imagine that Cardinal Muller is some sort of Superhero, but this is pure nonsense.

The aforementioned letter specifically stated with respect to the requirements outlined therein:

…during the Audience granted to the Cardinal Prefect on May 20 2017, the Sovereign Pontiff approved these decisions.

There is no chance that Muller simply made this up.

In any case, setting aside the details of this report, we still must ask:

Does Francis really have it in mind to abolish Summorum Pontificum?

According to Rorate Caeli, the answer is no; rumors to this end should be dismissed as “Fake News.”

There seems to be a Fake News epidemic in traditional Catholic websites — the latest of which are repeated reports of “rumors” (there are true and untrue rumors…) according to which Pope Francis wants to “abolish” the Motu Proprio Summorum Pontificum.

The rumors recur periodically, with variations. Most often, it is said that Francis will do so as soon as there is a “deal” with the Society of Saint Pius X (FSSPX / SSPX) for the establishment of a worldwide Personal Prelature.

These rumors are not true.

So, what are we to believe?

It is anyone’s guess whether or not a plan involving the SSPX vis-à-vis Summorum Pontificum actually exists. On this point, I’m skeptical.

What we do know with absolute certainty, however, is that Francis has already overturned the motu proprio’s central point; namely, the unequivocal declaration that priests of the Latin Rite have no need of permission from anyone in order to offer the Traditional Latin Mass.

How soon so many seem to have forgotten that Francis took a sledgehammer to this foundational precept just five months into his reign of terror!

Recall that on August 6, 2013, Andrea Tornielli of “Vatican Insider” published an interview with Fr. Alessandro Apollonio, the Procurator General of the Franciscan Friars of the Immaculate, in which they discussed the Holy See’s decision to restrict the order’s use of the so-called “Extraordinary Form.”

You see, a decree had just been issued by the Congregation for Religious, with the approval of Francis, that reads in part:

The Holy Father Francis has directed that every religious of the congregation of the Franciscan Friars of the Immaculate is required to celebrate the liturgy according to the ordinary rite and that, if the occasion should arise, the use of the extraordinary form (Vetus Ordo) must be explicitly authorized by the competent authorities, for every religious and/or community that makes the request.

The use of the extraordinary form must be explicitly authorized by the competent authorities.

Though the aforementioned decree was aimed specifically at the FFI, it effectively negated the very precept upon which every priest of the Latin Rite relies with regard to his right to celebrate the Mass of All Ages.

At the time of the decree’s issuance, I suggested that the future of Summorum Pontificum was thus hanging by a thread. Since then, I’ve been given no reason whatsoever to believe otherwise; indeed, on the contrary.

With the foundation of the document already well and truly compromised, barring a change of course, one has to imagine that it’s just a matter of time before Francis acts to destroy Summorum Pontificum entirely.

Bergoglio’s Call to Prayer: Will you participate?

The Apparent Death of the Catholic Church