Home
Blog Post
The Consecration of Russia … at the Expense of Souls? 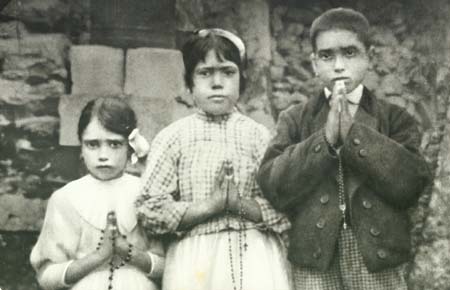 It would seem that my previous article,  Fatima Through the Lens of Vatican II: As Illustrated by Raymond Cardinal Burke, has ruffled quite a few feathers amongst the standard-bearers of the once-militant Traditionalist camp. The reaction exposes a synthesis between many traditionalists and conservatives taking place in front of our eyes. A new entity has arisen:  Conservative-Traditionalism.

Prominent traditionalists who have recently been collaborating with conservatives for the sake of a “common good” (the Consecration of Russia, in this case) have effectively opened the windows to errors and heretical ideas.

The result? These conservative-traditionalists are swiftly becoming as numb to error as their conservative counterparts.

My article had pointed out the revolutionary errors of John Paul II, Paul VI, and Vatican II promoted in Cardinal Burke’s speech on Fatima at the Rome Life Forum in May. Louie’s blog of July 18th cites an interlocutor’s comment that perfectly illustrates the “con-trad” position on the Cardinal’s talk:

“You and I might recognize the Council, the New Mass, and the New Evangelization as dangerous, but we both know that this is a very difficult reality for most conservative Catholics to accept. They’ve been lied to for so long that they have no idea what to believe. So rather than alienating them from Fatima even further, wouldn’t it make more sense to set those arguments aside for now and to treat Cardinal Burke, a man admired by many, as an ally in calling for the Consecration? I mean, this is what all of us want, isn’t it?”

This is the alarming new conservative-traditionalist mindset that I personally have encountered amongst those supposed to be defending the Catholic Faith and the true message of Fatima.

It’s a position far removed from Catholicism, which brooks no compromise with error. Pope Leo XIII tells us why in his encyclical Satis Cognitum (no. 9): “There can be nothing more dangerous than those heretics who admit nearly the whole cycle of doctrine, and yet by one word, as with a drop of poison, infect the real and simple faith taught by our Lord and handed down by Apostolic tradition (Auctor Tract. de Fide Orthodoxa contra Arianos).”

It is the serious duty of those who teach, preach, write, or speak about the Faith to be one hundred percent free of error. Why? Because souls depend on their words. To lead even a single soul astray through negligence or human respect can land one in hellfire.

Above all, every member of the hierarchy, from the Pope down to the parish priest, is obliged to pass on the Faith “whole and undefiled” because, as mandated by the Athanasian Creed, all the faithful must hold to the Catholic Faith in this manner or else “perish everlastingly.”

However, Cardinal Burke’s speech did not pass on the Faith undefiled. Instead, it upheld the programs of two Modernist Popes responsible for the promulgation of heresies and the blasphemous ecumenical movement. The Holy Office of pre-conciliar times would have, objectively, considered the speech a danger to the faith.

But what of the rather incoherent stance of our con-trad interlocutor?

First, he (or she) “recognizes the Council, the New Mass, and the New Evangelization as dangerous, … but this is a very difficult reality for most conservative Catholics to accept. They’ve been lied to for so long that they have no idea what to believe.”

Actually, all Catholics have been lied to; but only the conservatives accepted the lies.

So, should we enlighten them? Yes, says the traditionalist, that is our charitable duty. But, no, says the conservative-traditionalist, let us ignore our differences and work together for a common good.

This, dear reader, is ecumenism – within the Catholic Church. The ecumenical mindset seeks what unites, rather than what divides, and works for some common good such as peace. (Note: ecumenism goes hand in hand with the “new evangelization,” which is opposed to conversion and salvation.)

So just as John Paul II sold out the true Faith for the sake of an elusive world peace, the con-trad is happy to sell out the Truth for the world peace which will result from the Consecration of Russia. As Interlocutor says, “… this [the Consecration] is what all of us want, isn’t it?” And so, “wouldn’t it make more sense to set those arguments aside for now…?” Ecumenism in a nutshell!

First of all, Fatima is approved by the Church and its message has been open to all for a hundred years. Traditionalists don’t have a monopoly on Fatima and cannot alienate anyone from it.

Secondly, what conservatives have been alienated from is Father Nicholas Gruner, the main voice proclaiming worldwide the full truth about Fatima.

And that alienation was effected by the hierarchy’s relentless campaign of defamation against Father Gruner – including by Cardinal Burke himself.  In 2013, whilst Prefect of the Apostolic Signatura, he said:

Coming from the head of the Church’s Supreme Tribunal, this statement added clout to the censoring of Fr. Gruner’s attempts to spread the genuine Fatima message. So instead of becoming acquainted with the truth about Fatima, conservatives swallowed the official distortions fed them by Churchmen and Church-approved organizations.

Cardinal Burke’s speech itself was a skewed version of the Fatima message (see my article). It includes his astounding claim that Our Lady of Fatima called for the new evangelization. But as Interlocutor intimates, conservatives have been deluded for so long, why disturb them with the truth about Fatima now?

And, illustrating a widespread con-trad position, Interlocutor believes in overlooking the Cardinal’s errors, just because he called for the Consecration of Russia to be done – once again, mind you, as Our Lady allegedly asked for it to be repeated in every generation.

Conservative-traditionalists now consider they have won an important “ally” to Our Lady’s cause. But how could they ever feasibly regard as an ally someone (a) so openly opposed to Fr. Gruner’s work; and (b) who has re-written Our Lady of Fatima’s message?

Another point in favor of the Cardinal, says Interlocutor, is that he’s “a man admired by many.” So what? Since when does someone’s popularity justify our putting on blinders? A defender of the truth must be dead to human respect.

The message of Fatima is above all about the salvation of souls.  One hardly imagines Our Lady could approve the un-Catholic idea of condoning falsehoods and endangering souls in order to secure the Consecration She requested.

St. Paul exhorted us to love the truth in order to be saved. He warned that otherwise God will “send [us] the operation of error, to believe lying” (cf. 2 Thess. 2:10).  This is the unfolding tragedy Sr. Lucia termed the “diabolical disorientation,” in which “souls are letting themselves be deceived.”

Finally, in answer to Interlocutor’s burning question regarding the Consecration of Russia, “This is what all of us want, isn’t it?”, the uncompromised traditionalist’s response is No! Never at the expense of truth and the salvation of souls.

In the words of Sr. Lucia, “We must defend souls against the errors which can make them stray from the good road.”

Michael Voris: Beating the Devil to the punch

The latest stunt from the Bergoglian Circus UPDATED!