Home
Blog Post
The thread from which Summorum Pontificum hangs 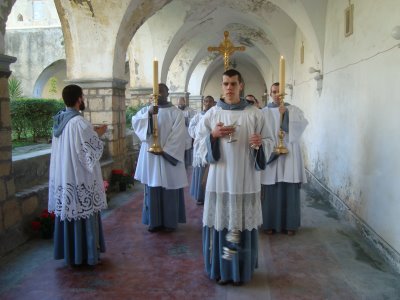 On August 6th, Andrea Tornielli of “Vatican Insider” published an interview with Fr. Alessandro Apollonio, the Procurator General of the Franciscan Friars of the Immaculate, in which they discussed the Holy See’s recent decision to restrict the order’s use of the so-called “Extraordinary Form.”

The decree issued by the Congregation for Religious, with the approval of Pope Francis, reads in part:

“The Holy Father Francis has directed that every religious of the congregation of the Franciscan Friars of the Immaculate is required to celebrate the liturgy according to the ordinary rite and that, if the occasion should arise, the use of the extraordinary form (Vetus Ordo) must be explicitly authorized by the competent authorities, for every religious and/or community that makes the request.”

After some initial confusion, the picture is becoming more clear, and let’s just say, it ain’t real pretty.

In his interview with Tornielli, Fr. Apollonio said, “Fr. Lombardi has clearly stated that the decisions taken regarding our Institute are not a disavowal of the Motu Proprio [Summorum Pontificum.] However,…”

Please allow me to translate these carefully chosen words:

In spite of Fr. Lombardi’s claim to the contrary, the restriction being placed on the traditional liturgy is precisely that, a restriction, the likes of which are expressly nullified in Summorum Pontificum wherein it states with regard to the celebration of the ancient rite, “the priest has no need for permission from the Apostolic See or from his Ordinary.”

Fr. Apollonio then suggests a rather obvious and as yet unanswered question: From whom precisely are the Franciscan Friars of the Immaculate now required to seek “explicit” permission in order to celebrate the traditional Mass?

For my part, I’m even more interested in discovering the answer to a question that far too few seem to be asking:

Permission to celebrate the traditional Mass will either be granted, or denied, based upon what criteria?

Only a fool can be confident that this same, or a similar, criteria won’t eventually end up being applied in the regulation of the traditional Mass in dioceses (and parishes) wherein the local ordinary (or pastor) is either ambivalent or hostile toward the ancient rite. And why not? Rome has given such men (if they ever really cared about the mind of the pope in the first place) all they need to claim justification for doing so.

Look, Summorum Pontificum was a tremendous gift, but let’s be honest, it has from day one been a less than perfect solution to what Cardinal Ratzinger once described as the “banal on the spot fabrication” that is the Novus Ordo.

Furthermore, those bishops who went-along-just-to-get-along with Summorum only reluctantly, or one might even speak of those who merely tolerated it, did so in large measure in deference to Benedict’s personal affinity for the ancient rite. (More on that in a moment.) This was apparently even true of the very men who worked in the Roman Curia during his papacy.

When asked by Tornielli whether it is “true that before the apostolic visit, the Ecclesia Dei commission had cautioned the Franciscan Friars of the Immaculate to be prudent in their use of the old missal,” Fr. Apollonio answered, “Yes, we tried to be as prudent and discreet as possible…”

One cannot help but wonder why it would ever be necessary to exercise “prudence” in such a matter, offering this centuries old, ever-valid and eminently praiseworthy rite of the Catholic Church only with “discretion”? The very idea is utter madness.

The bottom line is this: From the very moment Summorum Pontificum was issued, the powers-that-be in Rome, Pope Benedict included, have ever been at pains to prop up the Novus Ordo Missae, careful to paint it as an equal to the Usus Antiquior, (thus the clumsy labels “Ordinary Form / Extraordinary Form”) that differed only in externals, like paint colors on an automobile, with the underlying suggestion being that the Mass of Paul VI is utterly beyond reproach.

Even so, anyone who took the time to read Pope Benedict’s writings on the Mass, in particular as presented in “The Spirit of the Liturgy” written as Cardinal Ratzinger in the years 2000, realized that the Pontiff himself didn’t view the two “uses” as mere equals.

This brings us to the elephant in the room; neither does the current pope view them as equals, difference being, however, he seems rather obviously to hold the exact opposite opinion as his predecessor. And that, my friends, is the thread from which Summorum Pontificum now hangs. 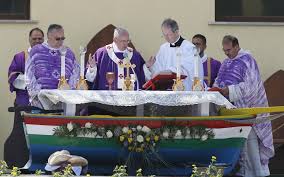 This is precisely why, I suspect, we are witnessing from the Holy See the re-emergence of the pre-Summorum  suggestion that the Novus Ordo Missae is in some way superior to the traditional Mass that it supplanted, an inverted notion of reality that subtly makes itself known in the decree pertaining to the Franciscan Friars of the Immaculate.

We will know what the immediate future holds for the Church based upon just one observation; namely, the liturgical mindset of Pope Benedict’s successor. If the man who is chosen has a distaste for the Traditional Mass, then rest assured, regardless of any apparent orthodox bona fides the new pope may have, the modernists will succeed in making Catholic life difficult. If, however, they elect a man who loves the Tridentine Rite, celebrates it often, and continues to do so as pope, know for a fact that while tribulation is most certainly coming, we are moving in the right direction.

Now, nearly five months into the papacy of Pope Francis, I stand by that assessment.