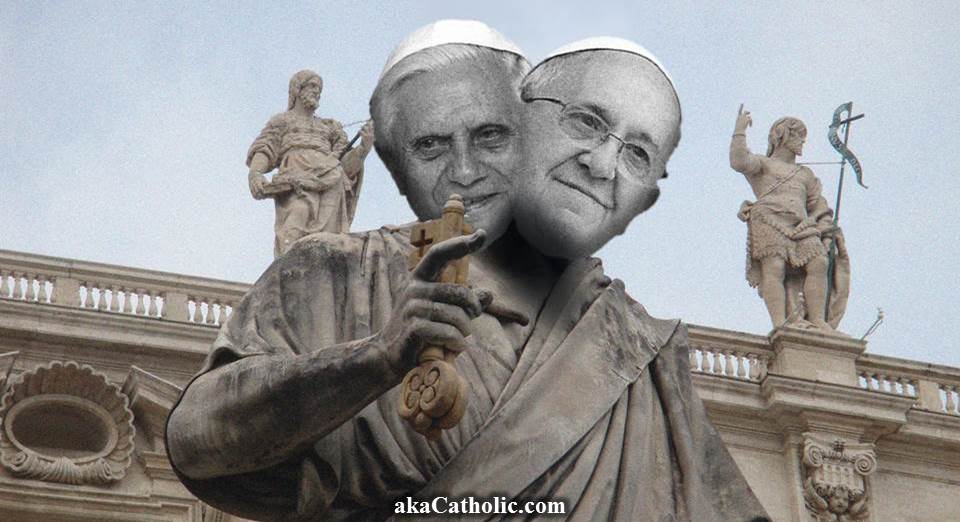 In the aftermath of Amoris Laetitia, with its bald faced blasphemy and hair raising heresy, one may well have been tempted to believe that the stench of infidelity emanating from Rome couldn’t possibly become more putrid than it already is.

And yet it has…

Archbishop Gänswein, a doctor of canon law who serves as both personal secretary for Benedict the Abdicator and Prefect of the Pontifical Household, recently confirmed what Italian journalist Antonio Socci has been saying for over two years now.

Socci, who is by no means a sensationalist (nor is he a self-described “traditionalist”), endured no small amount of criticism for pointing out (in February of 2014) that Benedict’s resignation was not complete, as in the case of Pope St. Celestine V, but rather it involved a deliberate intent on his part to assert a “distinction between ‘active exercise’ and ‘passive exercise’ of the Petrine ministry.”

As such, Socci suggested, there is an unprecedented situation in the Church today wherein two men, Benedict and Francis, propose to somehow share in the Petrine Office, each one exercising a particular aspect of the papacy; as if to divide the duties that are incumbent upon Peter’s Successor.

Several months later, the widely read Vittorio Messori penned an article for Corriere della Sera under the title “Here is why we truly have two Popes” wherein he quoted at length Stefano Violi, the highly-regarded Professor of Canon Law at the Faculty of Theology in Bologna and Lugano.

According to Professor Violi:

Benedict XVI divested himself of all the power of government and command inherent in his office, without however, abandoning his service to the Church: this continues through the exercise of the spiritual dimension of the pontifical munus entrusted to him. This he did not intend renouncing. He renounced not his duties, which are, irrevocable, but the concrete execution of them.

Messori then asks, “Is it perhaps for this that Francis seems not to be fond of calling himself ‘Pope’ aware as he is of sharing the pontifical munus, at least in the spiritual dimension, with Benedict?

While many have chosen thus far to dismiss these claims (to say nothing of the grave implications to which they give rise) as unworthy of serious consideration, avoidance of the matter is no longer a viable option thanks to the speech given by Archbishop Gänswein at the Pontifical Gregorian University on May 20th.

As reported by Edward Pentin of the National Catholic Register:

Drawing on the Latin words “munus petrinum” — “Petrine ministry” — Gänswein pointed out the word “munus” has many meanings such as “service, duty, guide or gift”. He said that “before and after his resignation” Benedict has viewed his task as “participation in such a ‘Petrine ministry’.

“He left the Papal Throne and yet, with the step he took on 11 February 2013, he has not abandoned this ministry,” Gänswein explained, something “quite impossible after his irrevocable acceptance of the office in April 2005.”

According to Gänswein, Benedict’s intention was nothing less than to “transform” the Petrine Office itself!

Archbishop Gänswein also said that Pope Francis and Benedict are not two popes “in competition” with one another, but represent one “expanded” Petrine Office with “an active member” and a “contemplative.” He added that this is why Benedict XVI “has not given up his name”, unlike Pope Celestine V who reverted to his name Pietro da Marrone, “nor the white cassock.”

“Therefore,” according to Gänswein, “from 11 February 2013, the papal ministry is not the same as before. It is and remains the foundation of the Catholic Church; and yet it is a foundation that Benedict XVI has profoundly and lastingly transformed by his exceptional pontificate.”

The words of Antonio Socci, written more than two years ago, come to mind yet again:

“One cannot pretend that everything is normal, because the situation is almost apocalyptic.”

What kind of man endeavors to profoundly and lastingly transform the Office of Peter?

It remains for Us now to say a few words about the Modernist as reformer. From all that has preceded, some idea may be gained of the reforming mania which possesses them: in all Catholicism there is absolutely nothing on which it does not fasten … Ecclesiastical government requires to be reformed in all its branches …  What is there left in the Church which is not to be reformed according to their principles? (cf Pope St. Pius X, Pascendi Dominici Gregis – 38)

According to Gänswein, Benedict could so “expand” (and effectively divide) the papacy “because he had long thought through, from a theological point of view, the possibility of a pope emeritus in the future. So he did it.”

So there you have it – Benedict could dream it, therefore, he did it.

But was it valid?

That’s the unavoidable question that must be answered.

If it wasn’t – if Benedict’s intent rendered the act of resigning invalid – this would mean that Antonio Socci had it right, Non È Francesco; i.e., the blaspheming heretic from Argentina that wants us to believe that adultery is no longer necessarily a mortal sin isn’t the pope.

The gravity of this situation cannot be overstated.

Regardless of where one stands on matters ecclesial – wild eyed progressive, head-in-the-sand neo-con, or so-called “traditionalist” (aka Catholic) – the common thread that binds us all at this historic moment in time is confusion.

For many, this confusion is not for lack of intelligence, nor is it for lack of a desire to know and understand the truth; rather, it is due entirely to the behavior of certain men of questionable faith whom the Lord allows to occupy the highest places in Rome, even to the Office of Peter.

The Holy Ghost is not the Author of confusion, and everyone worthy of the name Catholic knows who is.

With every passing day it becomes ever more evident that God has withdrawn His grace in such a way that diabolical influence is wreaking havoc in the Church; most notably among the shepherds.

So, if you are awaiting clarity from the bishops and cardinals as to the validity of Benedict’s quasi-renouncement of the Papal Throne, his intention to recreate the Office of Peter according to his own wishes, and therefore the status of that terrible scourge on the Body of Christ known as Francis, you do so in vain.

Clarity from these men is not forthcoming; in large measure, we are become orphans without a father.

What then shall we make of all of this?

We do well to recall the wise counsel that was given to readers of this space a couple of weeks ago by Fr. Demetrius:

“Do not be misled by the novelties … Apply the Catholic Smell Test: if something does not seem to be consistent or compatible with what the Catholic Church has always believed, taught and practiced, then it is probably not Catholic.”

My friends, I will not tell you what to make of this mess; I am but an orphan just like you.

That said, I will let you know what I make of it, and if doing so earns me more scorn and persecution, by the assistance of His grace, I will thank God for the privilege:

We know very well that the constitution of the Church, including the Office of Peter, is not subject to the whims of mankind; it was willed by Christ and it is immutable.

Archbishop Gänswein could not have been clearer than when he said of Benedict’s attempt to “transform” the Petrine Office (i.e., change the unchangeable) in such way that the papal ministry is not the same as before:

“He has built a personal office with a collegial and synodal dimension, almost a communal ministry…”

The stench of infidelity emanating from Rome has never been more putrid; in fact, it literally reeks of evil. To say that the convoluted quasi-resignation of Benedict XVI doesn’t pass the Catholic smell test is a magnificent understatement.

Sure, in some sense confusion still abounds as there is more to this story than we will ever know, but one thing is entirely certain, at least to me:

The presentation given by Archbishop Gänswein, which one is hard pressed to dismiss as unreliable, does not describe the Office of Peter upon whom the Church of Christ is built.

While some, no doubt, will take the position that Benedict’s resignation is valid until proven otherwise, I choose as my starting point the same that Fr. Demetrius suggested; namely, what the Catholic Church has always believed, taught and practiced.

As such, I cannot help but conclude that the alleged resignation of Benedict XVI is invalid until proven otherwise; which even though I will, in humility, allow as a possibility, I do so convinced that the burden of proof is all but insurmountable.

Let us turn to his namesake, St. Francis of Assisi, who prophesied:

At the time of this tribulation a man, not canonically elected, will be raised to the Pontificate, who, by his cunning, will endeavour to draw many into error and death.

Is the Argentinian Jesuit that man?

One can debate (and certainly many will) whether or not Francis, by virtue of Benedict’s novel intentions, validly occupies the Office of Peter. Fine, let the debate ensue. To the extent that men worthy of respect so debate, I will follow with interest.

In the meantime, Francis is, as we have known for some time now, a blasphemous heretic that we must not allow to draw us, or anyone else if we can help it, into error and death.

On this note, even though Archbishop Gänswein’s conference is a “game changer” indeed, nothing has changed. Keep this in mind as you go about deciding for yourself what to make of this unprecedented mess.

Beyond this: We must pray, fast, and make reparations for Holy Mother Church as her passion is clearly at hand.