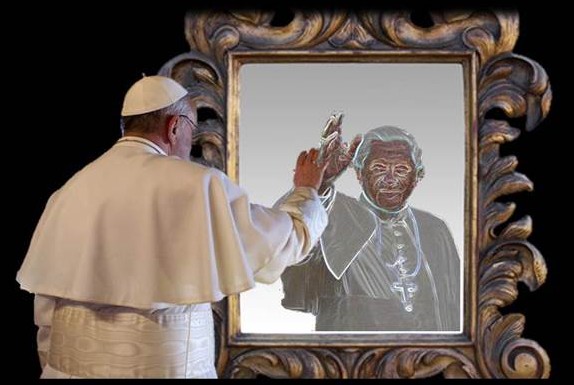 On the heels of Archbishop Gänswein’s stunning confirmation concerning the intentions of Pope Benedict XVI; namely, that by his “resignation,” he intended to “expand” the Petrine Office in such way that he and his successor would each have a share – one as “an active member,” the other as a “contemplative” – it hardly seems necessary to provide documentation in order to demonstrate that such an intention is invalid.

The proposed division of duties is so utterly incompatible with the nature of the Office of Peter as established by Christ, that those with even the most modest degree of sensus Catholicus just know in their gut that it is entirely impossible.

Even so, there do appear to be some Catholics who as yet remain sincerely and legitimately confused as to why it is beyond the power of anyone, including the pope, to so “expand” the Petrine ministry.

To these, I offer the following, beginning with a look at the First Vatican Council.

In the First Dogmatic Constitution on the Church of Christ (Session IV), Pope Pius IX, “with the approval of the Sacred Council, for an everlasting record,” reiterated the long-held conviction that the Petrine Office is the “divinely laid foundation” whereupon Our Lord “set blessed Peter over the rest of the apostles.”

Furthermore, the Holy Father speaks of the Petrine Office as “the permanent principle” of unity “upon which the strength and coherence of the whole Church depends,” the doctrine concerning which “is to be believed and held by all the faithful in accordance with the ancient and unchanging faith of the whole Church.”

Already, it is should be clear that the intended “expansion” of the Petrine ministry of which Archbishop Gänswein spoke is an impossibility.

Simply because it is a novelty that in no way whatsoever accords with the “ancient and unchanging faith of the whole Church;” the same that “is to be believed and held by all the faithful.”

Gänswein himself admitted as much when he said, “Therefore, from 11 February 2013, the papal ministry is not the same as before.”

The Sacred Council went on to speak (in the manner of the “ancient and unchanging faith of the whole Church”) of the Office of Peter in ways that repeatedly stressed the reality that in Peter and his Successors alone (i.e., in a most singular way) has primacy been divinely given; i.e., there is no suggestion whatsoever that it is, or can be, shared with another.

And it was to Peter alone that Jesus, after his resurrection, confided the jurisdiction of supreme pastor and ruler of his whole fold, saying, “Feed my lambs, feed my sheep.” (ibid.)

If Archbishop Gänswein’s presentation accurately reflects Benedict’s intentions, and there is every reason to believe that it does, it would seem that he desired to retain the Petrine ministry of “feeding” by way of “contemplative” service, while in some way relinquishing “the jurisdiction of supreme pastor and ruler.”

It is clear, however, that the ministry as given by Christ admits of no such division.

The unity of the duties and privileges committed to the one person of Peter, and likewise his individual Successors, was once again made plain in Chapter 3:

To him, in blessed Peter, full power has been given by our lord Jesus Christ to tend, rule and govern the universal church. (Session IV, Ch. 3)

Benedict, it would seem, imagines that he could open the way for another to “rule and govern,” while somehow retaining the Petrine ministry of “tending” the flock in a spiritual sense, but again, it is clear that the “ancient and unchanging faith of the whole Church” allows for no such division.

In Chapter 4, the Sacred Council sees fit to repeat the definition of the Council of Florence:

The Roman pontiff is the true vicar of Christ, the head of the whole church and the father and teacher of all Christians; and to him was committed in blessed Peter, by our Lord Jesus Christ, the full power of tending, ruling and governing the whole church. (Session IV, Ch. 4)

Again, we see that  the roles of “father” and the ministry of “tending,” along with that of “ruling and governing,” are committed to Peter alone, in a singular and “full” way, with no hint given that they may somehow be separated and shared.

Can one man be “Holy Father,” even as another, at one and the same instance, tends the flock in the same Petrine ministry?

One may, at this point, be disappointed that the Council did not specifically anathematize those who might seek to divide the Petrine ministry as Benedict intended, but the reason is simple:

As the Vatican Council met, the unity of those duties and privileges committed to Peter and his Successors was not under attack; i.e., there was none so bold as to propose, as Benedict apparently did, that two men may in some way participate simultaneously in the one munus Petrinum.

That doesn’t mean that the error has never been condemned, mind you.

On January 24, 1647, by way of a Decree of the Sacred Office, Pope Innocent X specifically condemned, get this…the “Error of the Dual Head of the Church.”

The most holy … has decreed and declared heretical this proposition … “there are two Catholic heads and supreme leaders of the Catholic Church, joined in highest unity between themselves”; or, “the head of the Catholic Church consists of two who are most divinely united into one”; or, “there are two supreme pastors and guardians of the Church, who form one head only.” (cf Denzinger 1091)

As for the background, the Decree was written as such propositions were apparently being put forth by those who justified their impious opinions by arguing in favor of what they erroneously viewed as a precedent:

How does this relate to the intentions of Pope Benedict XVI?

He [Benedict] has built a personal office with a collegial and synodal dimension, almost a communal ministry, as if he had wanted to reiterate once again the invitation contained in the motto that the then-Joseph Ratzinger had as Archbishop of Munich and Freising and naturally maintained as Bishop of Rome: “cooperatores veritatis”, which means ‘co-workers of the truth’.”

While there is no indication that Benedict likewise looks to a false understanding of the relationship between Peter and Paul as justification for the novelty of “co-workers” in the one Petrine ministry, the novelty itself is, in its essence, the same “Error of the Dual Head of the Church” that the Sacred Office “has decreed and declared heretical.”

The Church has ever had but one pope at a time, and until someone can convince me that the witness of the “ancient and unchanging faith of the whole Church” concerning the Petrine ministry is an unreliable guide in the present case (good luck with that!), I repeat after Antonio Socci, Non È Francesco.

Now, Jorge Bergoglio may sincerely believe that he is Holy Father, but if we’ve learned anything about him at all over the last three or so years it is that he believes many things that simply are not true. Indeed, he has demonstrated all-too-well that he is severely lacking, if not entirely devoid, of sensus Catholicus.

As for Benedict XVI, before you decide that following him is a safe path to follow, remember who he is:

This is the same modernist who ventured to divide what Pius IX called the “divinely laid foundation … upon which the strength and coherence of the whole Church depends,” and he did so (whether under pressure or not) by promoting the heresy that is appropriately called the “Error of the Dual Head of the Church.”

It was Benedict, not the invalid conclave of 2013, but Benedict who ventured (though in reality he could not) to toss the Keys to the Kingdom to the blasphemous Argentinian heretic Jorge Bergoglio; the same who has been “making a mess” of the Church ever since.

Ten Takeaways from the Pope’s Interview

The pope reads my blog