Home
Blog Post
Salza: “Ratzinger has been a double dealer for decades”

The complex web of lies and deceit being spun out of Rome concerning the Third Secret of Fatima just got a little more tangled.

On May 15, Dr. Maike Hickson, writing for the website 1Peter5, reported that she had spoken directly with Fr. Ingo Dollinger, a longtime personal friend of Benedict XVI, and he confirmed precisely what Fr. Nicholas Gruner and others associated with his efforts had long since claimed:

Not long after the June 2000 publication of the Third Secret of Fatima by the Congregation for the Doctrine of the Faith, Cardinal Joseph Ratzinger told Fr. Dollinger during an in-person conversation that there is still a part of the Third Secret that they have not published! “There is more than what we published,” Ratzinger said. He also told Dollinger that the published part of the Secret is authentic and that the unpublished part of the Secret speaks about “a bad council and a bad Mass” that was to come in the near future.

While confirmation is nice, this is old news, so it’s no big deal, right?

Apparently, it is a big deal; so much so that the Holy See Press Office felt the need to respond with a Communiqué stating:

Several articles have appeared recently, including declarations attributed to Professor Ingo Dollinger according to which Cardinal Ratzinger, after the publication of the Third Secret of Fatima (which took place in June 2000), had confided to him that the publication was not complete.

In this regard, Pope emeritus Benedict XVI declares “never to have spoken with Professor Dollinger about Fatima”, clearly affirming that the remarks attributed to Professor Dollinger on the matter “are pure inventions, absolutely untrue”, and he confirms decisively that “the publication of the Third Secret of Fatima is complete”.

I’ll have more to say about the content of the Communiqué momentarily, but for now let us ask:

Given that this story has already been in circulation for many years, why do the Enemies of Fatima in Rome feel compelled to respond now? 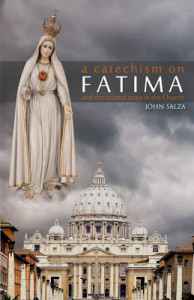 While this may seem perplexing at first glance, it actually makes perfect sense to those who are familiar with their modus operandi.

You see, while the story may be old, the source is new, and if little else about the Holy See’s handling of the Fatima message is clear, at least one thing most certainly is:

The Enemies of Fatima have no interest whatsoever in actually addressing the many credible arguments and claims that challenge their official position; rather, their modus operandi is simply to assassinate the character of those who make them.

So far, we must admit, their strategy is paying dividends; a perfect example of which comes to us courtesy of Karl Keating, the now retired Founder of Catholic Answers.

Maike Hickson describes Ingo Dollinger as “quite elderly and physically weak.” That might explain why he just now happened to “remember” this conversation with Cardinal Ratzinger, sixteen years after it supposedly occurred. Why didn’t Dollinger announce this news years ago? The most likely reason: because it never happened.

No, the only thing that apparently never happened is the five minutes of research it would have taken for Keating – an attorney by training – to realize that Dollinger did indeed “announce this news years ago.”

In addition to being a personal embarrassment, Keating’s ignorance is a direct fruit of Rome’s tireless efforts to sully the reputation of Fr. Nicholas Gruner – buon’anima!

Indeed, the entire smear campaign against Fr. Gruner was carried out for precisely this reason; namely, to see to it that the claims put forth by this truly holy priest and his confreres would simply be dismissed out of hand by those too intellectually lazy to examine the arguments in the case on their merits.

Keating, apparently having bought-in to the whole operation, is pleased to follow suit by likewise smearing others who might suggest that there’s more to the story than what Rome has chosen to reveal.

As for Dr. Hickson and Steve Skojec, the publisher of 1Peter5, the time is now at hand for their reputations to be destroyed, and it must happen quickly lest disoriented men like Karl Keating finally awaken from their slumber long enough to realize that the matter is worthy of closer examination.

As for the Communiqué itself, there is more than ample reason to believe that the quotes attributed to Benedict therein are themselves “pure inventions” – just like so many other things the Enemies of Fatima have shamelessly presented as fact over the years.

For the sake of argument, however, if we begin by assuming that Benedict really did offer the response that was published by the Holy See Press Office, it is fair to question his credibility in the matter.

This is the same man who said of the Third Secret of Fatima back in 1984 – some sixteen years before the official spin job was crafted:

[It concerns] a radical call to conversion, the absolute gravity of history, the dangers threatening the Faith and the life of a Christian, and therefore the world. And also the importance of the last times.

The story behind this quote is itself an indication of just how far the Enemies of Fatima will go to hide the truth.

I got in touch with John Salza, one of the world’s foremost experts on Fatima, for some background.

“Ratzinger’s quote,” he said, “comes from the November 11, 1984 interview he did with Vittorio Messori, which was published in the Italian journal JESUS, in an article called ‘Here is Why the Faith is in Crisis.'”

Salza then directed me to the following excerpt from his book, The Consecration of Russia: 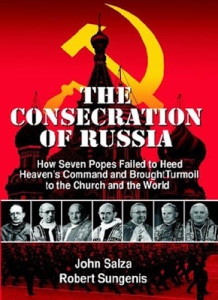 To add fuel to the fire, Cardinal Ratzinger’s interview with Vittorio Messori was mysteriously edited when later published in a book. In June 1985, Ignatius Press included the above interview in the book The Ratzinger Report. The book, which is translated into English, French and German from the Italian, has over one million copies in print. Upon comparing the original November 1984 interview with what appears in the 1985 The Ratzinger Report, one will notice that the words “the dangers threatening the faith and life of the Christian, and therefore the world. And also the importance of the Last Times…the things contained in this Third Secret correspond to what has been announced in Scripture” were excised from The Ratzinger Report. (The Ratzinger Report, San Francisco, California: Ignatius Press, 1985, pp.  109-111)

If this isn’t enough to call Cardinal Ratzinger’s credibility into question, consider what he had to say about Fatima as pope:

I would say that, here too, beyond this great vision of the suffering of the Pope, which we can in the first place refer to Pope John Paul II, an indication is given of realities involving the future of the Church, which are gradually taking shape and becoming evident. (In flight press conference, Rome to Portugal, 11 May 2010)

He would even go on to say while in Portugal, “We would be mistaken to think that Fatima’s prophetic mission is complete.”

Clearly, something simply doesn’t add up.

As for Benedict’s alleged denial of the quote attributed to Fr. Dollinger, like me, John Salza isn’t convinced that it’s plausible.

“The Dollinger quote has been out for nearly 16 years,” Salza pointed out. “Fr. Gruner reported it years ago and so did I, and Ratzinger never denied it, even though he had plenty of chances to do so.”

And then there is the questionable tone of the Holy See’s recent Communiqué; i.e., it really doesn’t seem very “Benedictine” to so plainly accuse anyone, much less an old friend, of putting forth a “pure invention.”

“Is Ratzinger calling Fr. Dollinger a liar? That is what his denial would amount to,” Salza said. “Unless he made the denial publicly, why should we believe it?”

On the other hand, there can be no doubt that the Enemies of Fatima in Rome – who in the year 2000 didn’t think twice about ensnaring Cardinal Ratzinger in their web of deceit by putting him in a position at odds with his own previous statements with respect to the Third Secret – have no compunction about doing so.

In the end, for John Salza, the conclusion to be drawn concerning Benedict’s credibility in the matter is fairly obvious, and I make it my own.

“Ratzinger has been a double dealer for decades.”