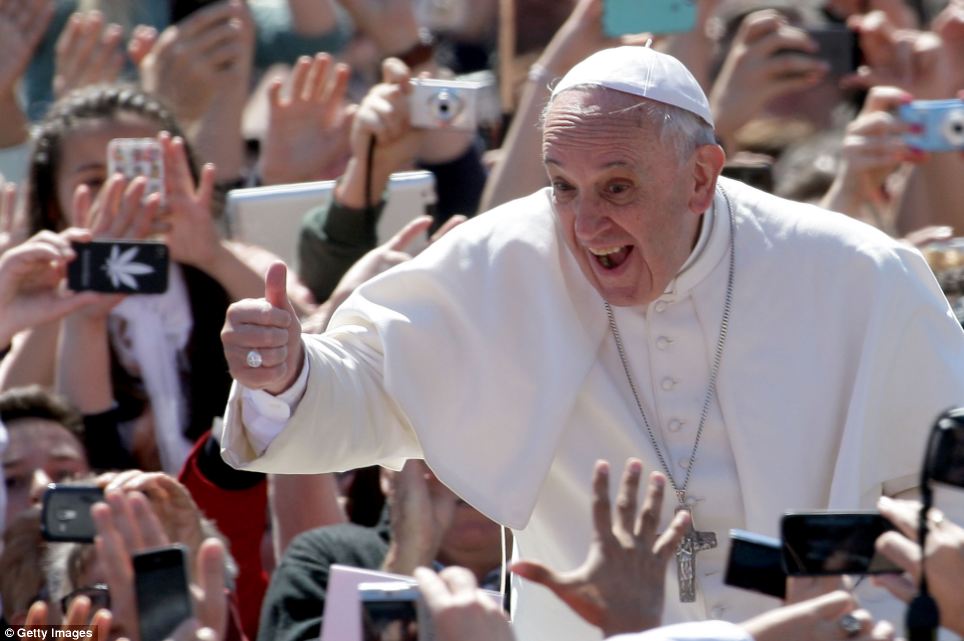 As my friend Fr. José Miguel Marqués Campo said of Pope Francis and his visit to the United States, he’s certainly outdoing himself!

I must admit that I’ve been a little detached from the coverage as I’ve been busy preparing for this weekend’s Catholic Identity Conference, but I’ve seen enough to concur with his opinion.

Here are just a few of the “highlights” that caught my eye:

Yesterday afternoon, Pope Francis gave a… umm…. I’m not entirely sure what to call it, but a quasi-blessing sorta thing to those gathered outside of the Capitol building.

With John Boehner by his side (presumably having a stroke), the “People’s Pope” (unless you happen to be a “traditionalist” – aka Catholic) looked out upon those who were present asking them to pray for him, adding:

“If there any among you who do not believe, or cannot pray, I ask you to send good wishes my way.”

Why someone would be “unable” to pray is beyond me, but at least he didn’t ask them to send out positive energy from the Universal Intelligence.

In any case, missing once again was the sign of the Cross or any mention of the Blessed Trinity, but this is nothing new for Francis. Every time I see him among the masses, he’s typically waving in the manner of a celebrity as opposed to imparting an actual blessing in the manner of a pope.

It seems that very often when the media reports “Pope Francis blessing” this person or that, the video footage shows him doing nothing of the sort; rather, what I usually see is a gathering of the faithful being given stones instead of bread. (For example, HERE.)

In any case, you can watch the papal performance from the Capitol balcony for yourself in the video below.

Of course, the sign of the Cross wasn’t the only thing missing from Francis’ “blessing” at the Capitol, so too was the name of Jesus Christ, which was also conspicuously absent from the speech that he delivered to Congress earlier in the day.

Once again, this is just more of the same from Pope Francis. (For example HERE.)

And then there was the Mass that Pope Francis celebrated on Wednesday, where once again… Oh well, just take a look:

OK folks… I know this topic has been broached by others before, but what the hell is going on with this pope who can’t seem to bend his knee before the Most Holy Eucharist at Mass?

Somehow he can manage to kneel when the humblecam is rolling, and yet even with his Master of Ceremonies standing by his side at the altar ready to assist, he can’t manage to genuflect at Holy Mass?

I wouldn’t be surprised if it’s a nod to the heretics who don’t believe in the Real Presence of Christ. I suspect, however, that the company lie is that he’s physically unable.

Of course, a lie such as this concerning the pope’s physical incapacities isn’t limited to the current pontificate, as Benedict the Abdicator aptly demonstrated.

In any event, if one is interested in looking for evidence that this pope, objectively speaking, holds the Catholic faith, I wish them luck in finding it. In fact, I might suggest that their search begin with a prayer to St. Anthony, because let’s be honest – all appearances are that it’s woefully lost.

As for evidence that Pope Francis – again, objectively speaking – is a modernist?

This is the topic of the presentation that I’ll be delivering at the Catholic Identity Conference tomorrow, and let me just say that my greatest challenge in preparing it is figuring out how to stay within the one hour I’ve been allotted.

I hope to see you there.

Trinitarian Heresy: The interpretive key to the crisis