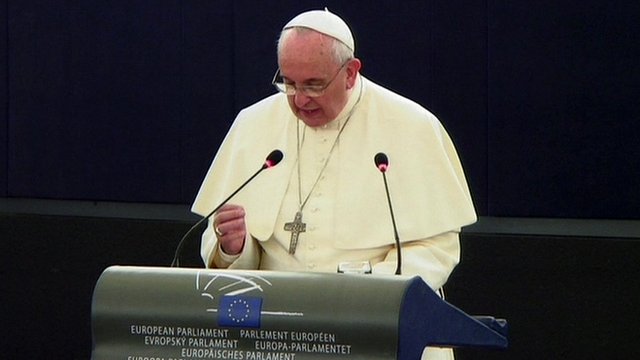 According to Dr. Robert Moynihan, longtime Vaticanista and editor-in-chief of Inside the Vatican Magazine:

When Pope Francis went to Strasbourg on November 25, he diagnosed Europe’s spiritual health. It was a brilliant speech, perhaps the greatest so far in his pontificate. With great clarity, with great passion — he was interrupted 14 times by applause — he set forth a vision for Europe to return to a more spiritual, more humane, path than the one she is on, which includes euthanasia, abortion, and gives “a general impression of weariness and aging.”

Yes, it was a noteworthy speech indeed, but its only claim to “greatness” lies exclusively in the degree to which it provides a brutally vivid image of the deplorable state of the Catholic Church in our day; one in which she no longer holds herself out as the bulwark of truth established by Jesus Christ, so that through her “the true light that enlightens every man” (John 1:9) might illuminate this world so often darkened by sin and error.

The simple fact that the European Parliament felt compelled to break out in applause more than a dozen times over the course of a roughly thirty minute speech is indication enough that Pope Francis wasn’t preaching Jesus Christ that day; on the contrary, he was once more extolling the virtues of man.

– In a text of some 3,700 words, Jesus Christ is mentioned a grand total of ZERO times

– Likewise, the Holy Catholic Church is mentioned not even once

– A generic reference to “God” is offered just four times, and this with no effort whatsoever to distinguish between the one true God of revelation and the many false ones invented by man

– “Christianity” scores but three mentions, while “Christians” are named but twice

I recommend reading the speech in its entirety, painful though it may be, as it is highly instructive in the ways of those who labor to supplant the Church of Christ with the church-of-man even as they indiscriminately utter phrases drawn from the vocabulary of the Faith.

For example, the Holy Father frames his speech as “a message of hope in the Lord, who turns evil into good and death into life.”

Sounds promising enough until he says in the very next breath:

It is a message of encouragement to return to the firm conviction of the founders of the European Union, who envisioned a future based on the capacity to work together in bridging divisions and in fostering peace and fellowship between all the peoples of this continent. At the heart of this ambitious political project was confidence in man, not so much as a citizen or an economic agent, but in man, in men and women as persons endowed with transcendent dignity. [emphasis added]

As for the nature of that “transcendent dignity,” the Holy Father states:

To speak of transcendent human dignity thus means appealing to human nature, to our innate capacity to distinguish good from evil, to that “compass” deep within our hearts, which God has impressed upon all creation. Above all, it means regarding human beings not as absolutes, but as beings in relation.

Curious, is it not, that Pope Francis, he who is so quick to label faithful Catholics “Neo-Pelagian,” should flirt with the error of Pelagius who promoted the notion that man possesses a natural ability to choose good over evil.

That aside, this could have been a launching point for invoking Jesus Christ and His Holy Catholic Church (otherwise known as the way in which God has chosen to redeem fallen man, thereby enabling him to enter once more into relation with Himself), but alas, it was not to be.

In fact, Pope Francis makes it very clear that the “relation” he has in mind consists of mankind’s relationship with other men:

Today there is a tendency to claim ever broader individual rights – I am tempted to say individualistic; underlying this is a conception of the human person as detached from all social and anthropological contexts, as if the person were a “monad” (μονάς), increasingly unconcerned with other surrounding “monads”. The equally essential and complementary concept of duty no longer seems to be linked to such a concept of rights. As a result, the rights of the individual are upheld, without regard for the fact that each human being is part of a social context wherein his or her rights and duties are bound up with those of others and with the common good of society itself.

Unmentioned throughout the speech is man’s obligation to God, much less to Christ the King to whom all authority in Heaven and on earth has been given, which just so happens to be every human being’s primary obligation!

At every turn, just as it appears that the Holy Father is about to point the way to Christ, he brings the conversation back to man.

How, then, can hope in the future be restored, so that, beginning with the younger generation, there can be a rediscovery of that confidence needed to pursue the great ideal of a united and peaceful Europe, a Europe which is creative and resourceful, respectful of rights and conscious of its duties?

He begins his answer by speaking of an “openness to the transcendent – to God – which has always distinguished the peoples of Europe,” but then, true to form, the humanist within comes rushing to the fore:

Taking as a starting point this opening to the transcendent, I would like to reaffirm the centrality of the human person, which otherwise is at the mercy of the whims and the powers of the moment.

Here, Pope Francis is encouraging others to join him in drinking deeply from the shallow well of John Paul the Great Humanist who never tired of preaching the so-called “primacy of the human person.”

He is a son of the post-conciliar church; as such, he considers the act of serving one’s fellow man as evidence enough of one’s openness to “God,” regardless of how one may perceive of Him.

It is perhaps for this reason that Jesus Christ and His Church merited no mention in this speech whatsoever.

As for “Christianity,” the Holy Father said:

I consider to be fundamental not only the legacy that Christianity has offered in the past to the social and cultural formation of the continent, but above all the contribution which it desires to offer today, and in the future, to Europe’s growth.

And of what, pray tell, might that contribution consist?

This contribution does not represent a threat to the secularity of states or to the independence of the institutions of the European Union, but rather an enrichment.

While this may strike many an American ear as a most reasonable proposition, when read through an authentically Catholic lens, the pope’s reassurance represents an obvious repudiation of the Lord’s Sovereignty.

In short, Pope Francis does not believe that he bears any obligation to work for the “Christianization” of the world, which just so happens to be the very mission that was given to the Church by  Christ.

In fairness, the same can be said of every pope who has reigned from John XXIII forward, but Pope Francis is by far the most aggressive of the lot in building the church-of-man.

There are those who might insist that we should assume, in charity, that Pope Francis truly does desire as clearly he ought that all men, societies and nations should accept what Pope Pius XI called “the sweet and saving yoke of Christ the King;” he simply doesn’t communicate that desire as plainly as some would like.

That’s a nice thought save for just one small problem…

It ignores the plain and indisputable fact that Pope Francis has been known to publicly dissuade those outside of the Church from entering her; i.e., he not only neglects the evangelizing mission that Christ gave to His Church, he actively, and without any hint of compunction, works to undermine it!

At the heart of this effrontery lies the hyper-inflated sense of human dignity that was sown throughout the Council documents and henceforth spread its way like an invasive weed in seminaries the world over, only to quickly occupy a place of prominence in the “magisterium” that proceeded therefrom.

It was in this environment that the Generalissimo of the conciliar revolution, Jorge Bergoglio, would be nurtured and formed:

“I am the first pope who … studied theology after the Council and, at that time, for us the great light was Paul VI.” – Pope Francis

And so it is that the nations of the world continue to dwell in darkness.

A word about comments