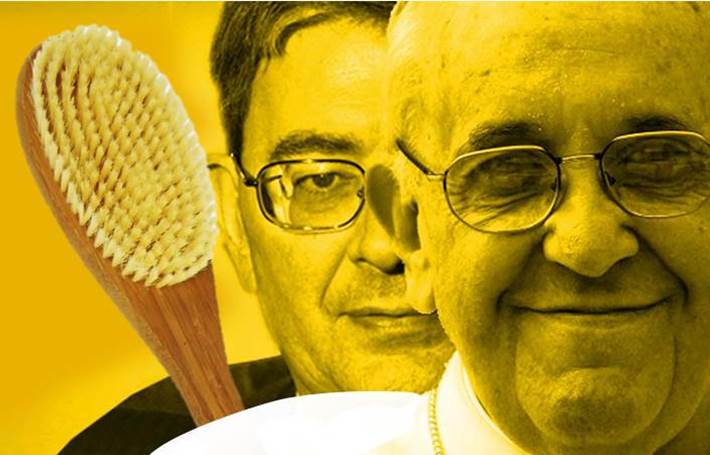 In a recent First Things column, George Weigel attempted to defend Pope Francis against the allegedly false impression so many have that he is “some kind of radical wild-man, eager to toss into the garbage bin of history” the more traditional aspects of the Catholic faith.

According to Weigel, it’s the media’s fault for “filtering out” of their reporting Pope Francis’ teachings in defense of tradition.

In this, one cannot but recognize the similarity between the modus operandi of the neo-conservative papal excuse makers and the Obama worshipping political left, as each group has created a scapegoat that can be flogged whenever their chosen idol is properly criticized; for the latter, it’s George W. Bush, for the former, it’s the big bad media.

As evidence of this media filter, Weigel points, among other things, to the pope’s “passionate defense of marriage as the stable union of a man and a woman, which he underscored in an address to the Schoenstatt movement right after Synod 2014.”

True enough, this address didn’t exactly make international headlines, but let’s not pretend that it was a “passionate defense” of tradition; in truth, it was nothing more than a pope reiterating immutable Catholic doctrine.

This is what popes are supposed to do!

So, why, one wonders, would George Weigel expect the media to alert the world to a run-of-the-mill occurrence such as this?

I mean, wouldn’t that be like me notifying my auto mechanic every time my truck starts?

Consider this; my truck starting really would be news if I hadn’t been able to get it going for some twenty-one months.

With this in mind, Weigel is actually on to something, even though all indications are that he doesn’t quite possess the wherewithal to connect the dots.

You see, the only reason any Catholic might consider a pope speaking like a pope newsworthy (Weigel included, even if only subconsciously), is the plain fact that he so often attacks the doctrines of the Faith!

In the present case, everyone who is paying attention realizes that the greatest challenge facing the Church as it concerns her treatment of marriage is Pope Francis himself; otherwise, the pope repeating the Faith of the Church on the matter wouldn’t even merit a yawn.

Lastly, Weigel concluded with another favored maneuver of the defenders of all things Francis; he played the Devil card:

Another aspect of Pope Francis’s preaching that’s been too often filtered out of the coverage of his pontificate involves (if you’ll pardon the term) demonology. No pope in decades has so regularly referred to Satan as Pope Francis. The Evil One is no abstraction to this pontiff, nor does he think of “satanic” as a rhetorical intensifier to underscore one’s disapproval of, say, Hitler. Satan and his minions are very real to Pope Francis; it would be interesting for an enterprising reporter to draw him out on the subject in one of those freewheeling papal press conferences.

Need I remind Mr. Weigel that “the last pope in decades” to so regularly refer to Satan was none other than Pope Paul VI; the Jimmy Carter of popes who will forever be remembered in history as he whose ineptitude paved the way for a period of unprecedented upheaval in Catholic life; including having presided over the greatest liturgical disaster the Church has ever, and very likely will ever, have to endure.

Perhaps Pope Paul of bitter memory found the Devil’s name on the tip of his tongue so frequently because he was so often, knowingly or not, marching to the Evil One’s orders.

In any case, it is at once interesting and a cause for deep concern that our current Holy Father has confirmed that for him, “the great light was Paul VI.”

And so the upheaval continues…