October 13, 2017 – the 100th anniversary of the great Miracle of the Sun at Fatima – came and went with nary a mention from the Holy See.

Two days earlier, however, during his general audience, Francis did say:

Next Friday, 13 October, the centenary of the last Marian apparitions in Fatima will come to an end … I invite all, especially in this month of October, to pray the Holy Rosary for the intention of peace in the world.

In isolation, this call for the faithful to pray the Holy Rosary is laudable.

Then again, let’s not kid ourselves.

We know very well that the “intention of peace in the world” according to Francis (the same who once declared that man is “King of the Universe”) has nothing whatsoever to do with working for the Reign of Our Lord Jesus Christ, but rather with such things as demanding respect for false religions, celebrating diversity, and furthering the cause of radical environmentalism.

As such, one could hardly have been surprised when he immediately went on to call attention to something that, by all indications, concerns him far more than Our Lady’s message as given at Fatima:

On the same day, 13 October, we observe the international Day for the reduction of natural disasters. I renew my heartfelt appeal for the safeguarding of creation through increasingly careful protection and care for the environment.

Here, Francis is referring to an initiative of the U.N.; one that is tied directly to the diabolical Sustainable Development Goals, the promotion of which have been granted the full support of Bergolgio’s Vatican.

So much for Rome’s regard for Our Lady of Fatima!

And yet, just this week the Holy See issued a text that leaves little doubt concerning its high esteem for the spouse of the creator; she who dispenses all that mankind needs in order to attain to prosperity, both spiritual and otherwise, and she by whose mediation the destroyer of the universe is held at bay.

A step in the right direction?

You see, the text to which I refer concerns not the Blessed Virgin Mary, spouse of the Holy Ghost and Mediatrix of All Graces, who never ceases to intercede for us, but rather does it concern the pagan Hindu goddess Lakshmi. 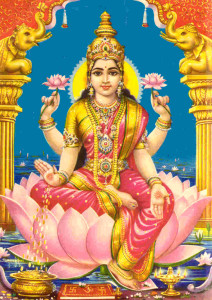 Just as in years past (dating at least as far back as 1997), the Pontifical Council for Inter-religious Dialogue has published a “Message on the occasion of the Feast of Deepavali;” a four day pagan festival that begins today during which Hindus offer special worship to the four armed Lakshmi (right); the goddess who they hope will somehow make their dreams of prosperity come true.

If you can stand it, go ahead and read the full text for yourself. While hardly the most scandalous document to emerge from the Vatican in the last fifty years, it does serve a purpose; namely, to make painfully clear the degree to which the men running the show simply are not Catholic.

For instance, the text boldly affirms the right of men “to profess and practise the religion of one’s choice.”

By contrast, the Holy Catholic Church has plainly condemned as a grave error the notion that “every man is free to embrace and profess that religion which, guided by the light of reason, he shall consider true.” (See Pope Pius IX, Syllabus of Errors, article 15)

The message also reads in part:

May this festival of lights illumine your minds and lives, bring joy to your hearts and homes, and strengthen your families and communities!

In Him was life: and the life was the light of men. And the light shineth in darkness: and the darkness did not comprehend it. (John 1:4-5)

Jesus spoke to: them, saying: I am the light of the world. He that followeth me walketh not in darkness, but shall have the light of life. (John 8:12)

At Fatima, Our Lady forewarned us.

Cardinal Mario Luigi Ciappi, who served as personal theologian to five popes from 1955-1989, and who had firsthand knowledge of the Third Secret of Fatima, said:

In the Third Secret, it is foretold, among other things, that the Great Apostasy in the Church begins at the top.

Can there be any doubt whatsoever that apostasy is upon us; with Rome shrouded in darkness, no longer concerned with He who is the Light of the world?

The Heart of a Priest’s Fatherly Love (Part I)