Home
Blog Post
The U.N., the “Holy” See, and your money 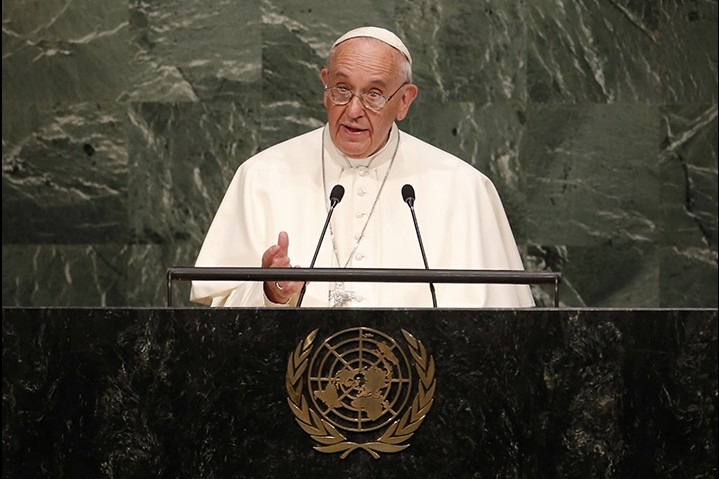 On July 17, 2017, Archbishop Bernardito Auza, Apostolic Nuncio Permanent Observer of the Holy See to the United Nations, gave an Intervention at the U.N. on “Mobilizing Religious Communities to Act with Solidarity and Shared Responsibility to End Poverty and Promote Peace.”

In it, one will find more evidence still (for those who as yet still need it) that the church-of-the-Council is a church of this world indeed; one that has absolutely no interest in the Divine Commission as given by Christ.

In fact, it is no exaggeration to say that post-conciliar Rome – in particular as it is being led by Francis – is actively opposed to the mission that Christ gave to His Church, and in ways that may just surprise many.

As for the mission of the conciliar-church, Archbishop Auza concisely summed it up thus:

…alleviating poverty, feeding the hungry, providing health care, educating multitudes from elementary schools through universities and beyond, promoting the dignity of women and especially their indispensable service as mothers, caring for our water and environment, engaging in peacemaking and peacebuilding, and so many other noble activities.

To collaborate with greater energy and effectiveness in … implementing the other pillars of the 2030 Agenda.

In this, the Nuncio was referring to the United Nations’ initiative, Transforming our World: The 2030 Agenda for Sustainable Development.

So, what are those “other pillars” the implementation of which the Archbishop has pledged to commit the Church’s energy?

To find out, we’re going to take a closer look at the 2030 Agenda, but before we do, let’s be very clear about the degree to which Archbishop Auza and Francis, the man for whom he speaks as Nuncio, are aware of its contents.

In June of 2015, when the 2030 Agenda was in the drafting stage, Archbishop Auza delivered a statement to the U.N. concerning the seminal document entitled, Zero Draft, Post-2015 Development Agenda wherein he said:

We support the verbatim inclusion of the sustainable development goals and targets as in the Report of the OWG [the Open Working Group charged with drafting the 2030 Agenda] … We would support a strong and focused means of implementation section, recognizing that this section is foundational for the fulfillment of the new agenda. We would strongly encourage the use and coordination of all sources of financing to achieve the SDGs and development in general.

NB: The Archbishop, on behalf of Francis, endorsed the draft “verbatim.” Keep this in mind as we go about exploring just what this entails.

At one point, Archbishop Auza even provided the U.N. with some expert advice on how best to sell the Sustainable Development Goals to those who as yet remain unmotivated to support the effort.

No doubt drawing upon his firsthand knowledge of the way in which the Vatican plays on the emotions of its audience and employs propaganda to deliver its own messages, the Archbishop said:

By using brief inspirational or lead sentences, akin to the methods of social media, the political declaration should prepare us for reflection and usher in our interest in the three chapters.

At this, let’s now take a closer look at the most relevant portions of those “three chapters” as found and endorsed word-for-word in the final draft of the 2030 Agenda – the same that Francis’ mouthpiece, Archbishop Auza, pledged on July 17 to “collaborate with greater energy and effectiveness in … implementing.”

The Agenda itself doesn’t contain any explicit mention of “sexual orientation” or “gender identity.” It does, however, call for “gender sensitive development strategies” and “gender equality.”

All in all, not the worst news, right? 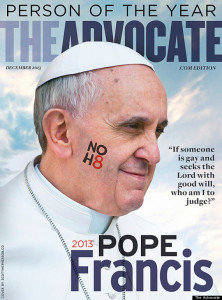 Writing for the homo-journal, Advocate Magazine, Jean Freedberg said of the Agenda:

The good news is that there is still sufficiently broad language related to inclusion and sexual and reproductive health and rights that it can encompass LGBT issues. What matters now is how this text gets interpreted and applied going forward.

In other words, the 2030 Agenda, at least insofar as the LGBT agenda is concerned, is written in the style of the Council documents!

So, how does Bergoglian Rome wish to see the Agenda implemented with regard to so-called LGBT issues?

On this point, I suppose we’ll have to wait and see, but given that Francis was the proud recipient of the Advocate “Person of the Year Award” for 2013, and the Vatican has become a veritable gay dude ranch on his watch, I’d say that the handwriting is already on the wall.

When it comes to birth control and abortion, however, there is even less reason to expect a good outcome.

Among the statements endorsed “verbatim” by Francis via his Nuncio at the U.N. are the following:

By 2030, ensure universal access to sexual and reproductive healthcare services, including for family planning, information and education, and the integration of reproductive health into national strategies and programmes. [Emphasis Added] (2030 Agenda, pg. 20)

As the text implies, one can expect that a push will no doubt be underway to pressure individual nations to adopt so-called “family planning and sexual and reproductive health” initiatives as deemed acceptable to the U.N.

NB: Here we find that “sexual and reproductive services” are also anointed as “rights” – a designation that will presumably justify international sanctions against offending nations.

Note as well the reference to, and the uncritical acceptance of, the Beijing Platform – a document that impeccably emulates the conciliar model.

In it, one will find such claims as:

In no case should abortion be promoted as a method of family planning … Prevention of unwanted pregnancies must always be given the highest priority and every attempt should be made to eliminate the need for abortion. (Beijing Platform, pg. 30)

The Platform later clarifies just how the “need for abortion” (notice the word choice – need) is best “eliminated” stating:

…fertility, reproductive and mental health and contraceptive practice, should be promoted, as well as research on treatment of complications of abortions and post-abortion care. [Emphasis added] (ibid., pg. 47)

The push to end poverty – a centerpiece of the Bergoglian agenda – is such that women are envisioned as members of the workforce first and foremost, and as wives and mothers only as an afterthought:

Early child-bearing continues to be an impediment to improvements in the educational, economic and social status of women in all parts of the world.  Overall, for young women early marriage and early motherhood can severely curtail educational and employment opportunities and are likely to have a long-term, adverse impact on the quality of their lives and the lives of their children. (ibid., pg. 35)

Note the audacity: The Platform goes so far as to denigrate motherhood even in the context of marriage!

And let us not forget – the Beijing Platform is part and parcel of the 2030 Agenda that Archbishop Auza – once again let us be clear – who as Nuncio speaks for Francis, pledged to collaborate with greater energy and effectiveness in implementing.

If all that has been said is not bad enough, the Platform also stresses, and numerous times at that, the necessity of ensuring access to “safe abortions.”

– Unsafe abortions threaten the lives of a large number of women… (ibid., pg. 36)

– Actions to be taken: Recognize and deal with the health impact of unsafe abortion as a major public health concern (ibid., pg. 39)

– Unsafe abortion is defined as a procedure for terminating an unwanted pregnancy either by persons lacking the necessary skills or in an environment lacking the minimal medical standards… [Emphasis added] (ibid., pg. 131)

Needless to say, the safety of the unborn child is given no treatment whatsoever.

In addition to incorporating the entirety of the Beijing Platform, the 2030 Agenda also states:

We recommit ourselves to the full realization of all the Millennium Development  Goals (MDG)… (2030 Agenda., pg. 9)

Before commenting on the MDG, one may have already made note of the fact that it is necessary to connect any number of dots in order to obtain a complete understanding of the 2030 Agenda.

This is not because the U.N. is sloppy and undisciplined; on the contrary.

The document is deceptive by design – a hallmark of the Evil One, the same who has many accomplices, unwitting or otherwise, entrenched in positions of power in Rome; all the way to Domus Sanctae Marthae.

On closer look, one will find that the MDG itself boasts of several different “campaigns and initiatives” – one of them being “The Better World Campaign” (BWC).

At this point, suffice it to say that the BWC is directly involved in lobbying efforts to ensure international support for the United Nations Population Fund (UNFPA), which provides funding for abortions in countries throughout the world.

As part of this effort, the BWC produced (for use in the United States) a “Congressional Briefing Book” that includes the following:

Last year (2016), U.S. contributions for international reproductive health prevented an estimated  320,000 unintended pregnancies, 100,000 unsafe  abortions, and 10,000 maternal deaths. The loss of U.S. funding to  UNFPA for one year would prevent the delivery of services, including  sexual and reproductive health…

Much to the dismay of the BWC and Satanic minions everywhere (some of them most certainly in Rome), President Trump has since decided to withdraw U.S. funding from the UNFPA.

We could go on connecting the dots all day long, but presumably the point has been made.

In conclusion, I’d like to revisit the following from Archbishop Auza’s statement of June 2015:

We would strongly encourage the use and coordination of all sources of financing to achieve the SDGs and development in general.

It would appear that in addition to endorsing “verbatim” what ended up becoming the language of the 2030 Agenda, the Archbishop, on behalf of His Humbleness, Francis, also made a financial commitment on the part of the Holy See for the purpose of implementing the U.N.’s Sustainable Development Goals.

Keep that in mind if and when your parish asks for donations to Peter’s Pence; something that took place in most parishes in the the U.S. in early July.

In keeping with my last post, Naming names, readers may be interested in knowing that the Remnant ran an article in June 2016 raising a red flag with regard to Peter’s Pence.

So far so good, but the solution proposed by the writer therein is as follows:

Instead [of donating to Peter’s Pence], send a generous check to the nuns, they will use it wisely and charitably: Sisters of Life, Missionaries of Charity, Franciscan Sisters [all three hyperlinked to make donating easier]

In response, I can do no better than to echo the sentiments of a commenter on the Remnant site, Michael, who wrote in reaction to this suggestion:

Speaking of the SSPX, I am wondering whether or not the Society itself makes a contribution to Peter’s Pence or otherwise sends funds directly to the Holy See. To find out, I just sent an inquiry to the U.S. District House.

In the meantime, I discovered that the SSPX published a positive article on Peter’s Pence back in March.

What this indicates, I do not know, but I hope to discover that the Society does not forward even a nickel collected from its faithful directly to the Holy See. I will keep you posted as to their reply.

[UPDATE: I have confirmed with the SSPX that they do not give to Peter’s Pence or otherwise provide funding to the Holy See.]

I am also unaware to what extent dioceses are required to send money to the Holy See.

I reviewed the latest available financial statement from the Archdiocese of Baltimore (my diocese) and no such entry was obvious.

In any case, one must likewise beware when solicited by any Catholic group that routinely sends money to the Holy See; e.g., the Knights of Columbus, who presented Francis with a check for $1.6 million in February 2017.

The Evil One is a master of deception indeed. If you can help it, don’t let him deceive you or your loved ones into funding the nefarious agenda outlined in this post.