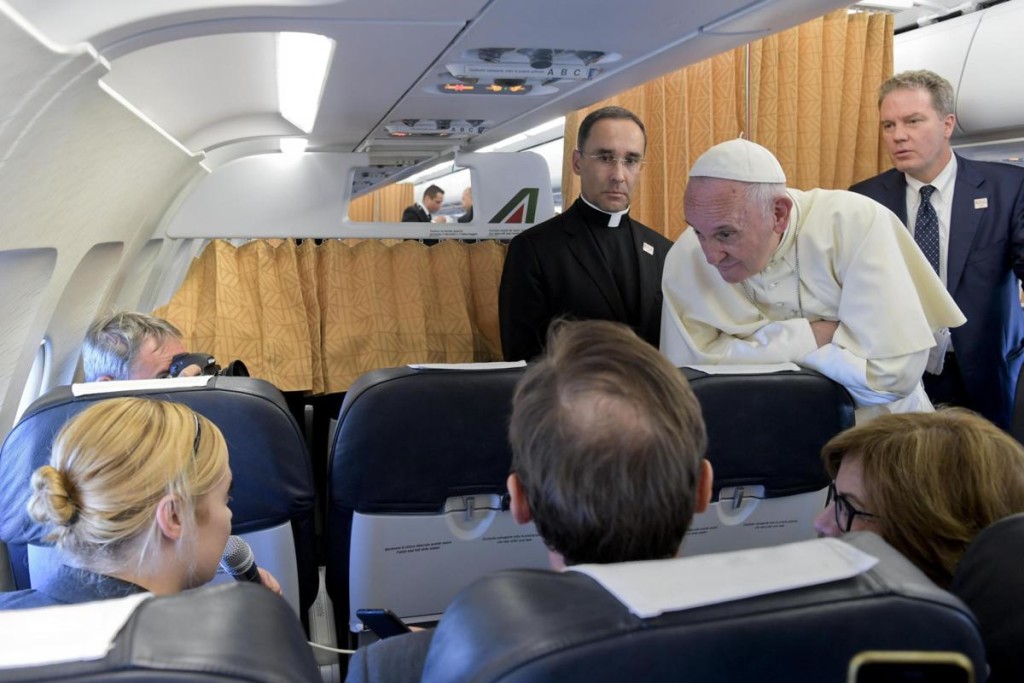 As I write, the big Catholic news story concerns the bomb that was dropped from Heretic One yesterday. As reported by the Bergoglian News Agency (CNA):

On papal flight, Francis says intercommunion policy should be decided by diocesan bishops

His exact words don’t so much matter, but I’ll provide the relevant ones just the same. When asked about the infamous “pastoral” guidelines proposed by the German Bishops Conference allowing Communion for a Protestant married to a Catholic, he responded:

The Code of Canon Law provides for what the German bishops were talking about: Communion in special cases. And they looked at the problem of mixed marriages: whether it is possible or not possible. However, the Code says that the particular bishop of the Church – this word is important: particular, if it is from a diocese – must manage this thing: it is in his hands …

It [the Code of Canon Law] foresees the competence of the diocesan bishop [in the matter of intercommunion in special cases], but not of the Episcopal Conference. Why? Because something approved in an Episcopal Conference immediately becomes universal.

As boiled down for readers by CNA:

“The particular Church, the Code permits it, the local Church [episcopal conference] cannot because it would be universal,” Francis elaborated. “The conference can study and give direction and opinions to help the bishops to manage the particular cases,” the pope added.

Don’t be fooled by the all of the nonsense about Canon Law and the distinction between local Churches, particular Churches, and the Universal Church. This is nothing more than Bergoglio’s rhetorical version of the tango – his favorite liturgical dance.

The bottom line according to him is precisely this: Intercommunion with Protestants is allowed. Period. End of discussion. Have a nice day.

Oh, when a Protestant married to a Catholic discerns a serious spiritual need to receive Holy Communion and the local ordinary gives his approval, right?

Pay close attention, folks. Francis is saying that Church Law gives bishops the authority to approve of Holy Communion for Protestants in special cases (in the original Italian, casi speciali), and undefined special cases at that.

As for the German scenario? This is just one of them.

In other words, Canon Law, according to Bergoglio, leaves the door wide open as it concerns what is, and what is not, a special case that may allow for intercommunion.

Never mind that Canon Law speaks of “grave necessity” and places some additional qualifications on the dispensing of sacraments to non-Catholics, what matters is that the man in white – who is presumed to have the final word on such matters of law – has essentially given bishops all over the world carte blanche to do as they please in the broadest possible sense in this matter.

NOTE: See HERE for a closer look at the Canon in question.

So, practically speaking, what does this portend?

In Germany, the discussion presently centers around Protestant-Catholic marriages, but since Francis did not limit his comments to this, what is to stop a bishop anywhere else in the world from deciding that a Protestant who has a lot of really cool Catholic friends isn’t a “special case” that also merits consideration?

The answer: Nothing, the pope (if you will allow) couldn’t have been plainer; special cases  are in the bishop’s hands.

And lest anyone think for a moment that Francis will allow himself to be influenced by a stricter reading of the law, don’t forget that he has already shown that he isn’t the least bit hesitant to change Canon Law by way of motu proprio, largely without consultation, as he did in the case of annulments.

And that, my friends, may be exactly where this situation is headed. After all, as I wrote just a few weeks ago, barring either death or Divine intervention, universal norms for intercommunion are coming. It’s just a matter of when.

What happened to Stompin’ Tom Weinandy?