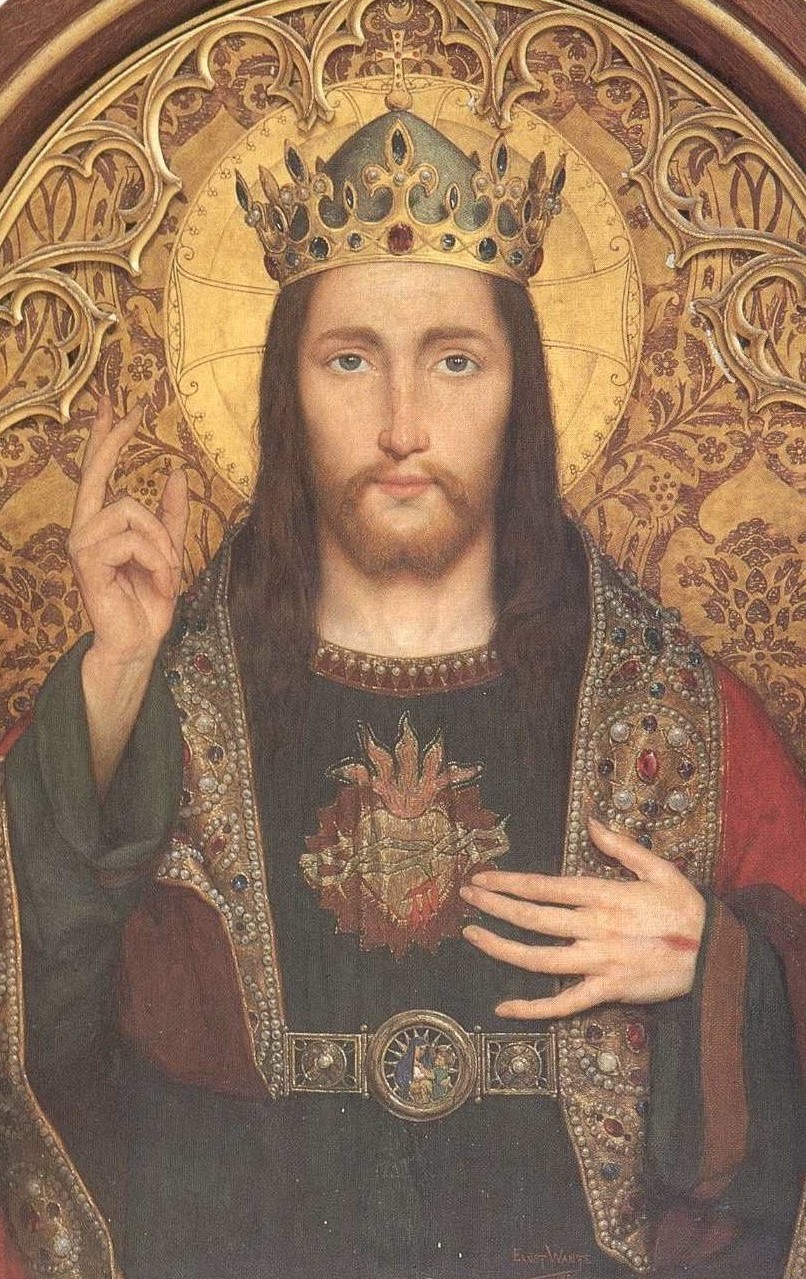 Commonweal Magazine, which dwells on the “peripheries” (to borrow a Bergoglian favorite expression) of liberal Catholicism (if you will allow), recently posted a blog article by Michael Wright titled, Silent Grace: Finding Peace in the Latin Mass.

By way of background, Mr. Wright is a self-described “Green Catholic” living in Texas, and whose 2017 bio at the website of National Catholic Reporter (another far left media outlet) stated that he “leads the environmental justice ministry at St. John the Baptist Catholic Church in New Freedom, Pennsylvania.”

Over the last few days on my social media feed, I’ve noticed that Wright’s Commonweal post is getting a great deal of positive attention in some traditional Catholic circles; as if his take on the Traditional Latin Mass in some way serves as vindication.

Most recently, I saw just such commentary on the Rorate Caeli  blog and decided to read the article for myself.

Having done so, I’m impressed by just how little it takes to elicit these kinds of reactions from certain tradition-minded folk.

Before I go further, it is necessary to make two important points:

One, we should rejoice whenever anyone expresses an affinity for the Traditional Roman Rite; in particular, when that person was formerly devoted to the Novus Ordo and is apparently having their eyes opened to some extent.

On this note, I join those who see in Mr. Wright’s commentary a reason for hope for him and his family.

Secondly, it is pretty much a given that an article about the Traditional Latin Mass published by Commonweal is not going get everything right; i.e., we should expect it to retain if not outright error, at least a palpable degree of liberal bias.

It is for this reason that those with a trusted voice in traditional Catholic media (or even just a traditional voice in social media among fellow Catholics) must qualify their enthusiasm for such articles; lest they end up misleading more persons than they enlighten.

At this, let’s take a look at some of Mr. Wright’s comments.

After sharing his sense of discontent during his years of attending the Novus Ordo, he goes on to say:

Then, three or four years ago, on a whim, I attended Latin Mass at St. Mary’s Cathedral in Austin, Texas. … My faith is not certain, and my doubt leads to questions. The Latin Mass welcomes me into the silence that allows me to seek the answers.

Yes, the Traditional Latin Mass is a great place to seek answers; not because it is properly didactic or because it offers solitude, but because lex orandi statuat legem credendi – the law of prayer establishes the law of belief.

For example, the Traditional Mass is indeed remedial for one who might struggle with belief in the Real Presence after years of Novus Ordo indoctrination.

Despite Catholic school and all that CCD, I didn’t realize until then the Novus ordo wasn’t just a straight translation. The Latin readings confused me; I couldn’t tell, for example, just when the transubstantiation was occurring. But I knew without looking at the translation when we were saying “Lamb of God” and the Lord’s Prayer. I watched these strange ways of doing familiar things. The priest faced away from us. We knelt to take communion on the tongue. All the altar servers were male. I bowed at the priest during the recessional, incense still in my nostrils. Then I did something I’d never done after Mass. I sat in a pew, and I felt it: peace.

Again, these are encouraging comments from someone who appears to be taking steps, however grand or modest they may be, toward tradition.

The article goes a bit off the rails, however, when Wright states:

No one at St. Mary’s has been less than welcoming to me and to my family, but they do worry that I am going to hell for reading Commonweal.

This is, of course, both gratuitous and absurd. One can be certain that no one told Wright that his soul is in jeopardy for reading Commonweal, and in truth, he likely has no idea what the “welcoming” people at St. Mary’s are really worried about.

Even so, the urge to paint “trads” in a bad, judgmental, light apparently proved irresistible. Wright wasn’t quite finished, however. He went on:

Called to a liturgy that hasn’t changed in centuries, they [the Latin Mass-goers] seem very close-knit, almost to the point of insularity. In the past, they’ve pushed the idea of establishing a parish of their own, separate from St. Mary’s, where Mass would only be said in Latin. For many at St. Mary’s, the Latin Mass seems to be a part of a larger withdrawal from modern society, including Vatican II. Many homeschool their children, even for religious education. Some drive from as much as an hour away, making the weekly trek because they cannot find what they’re looking for in their home parishes. They seem to be a community within a community, creating walls, whether they mean to or not.

Insular, wall-building separatists who are withdrawn from the modern society, and Vatican II.

Yes, there are parts of this description about which many tradition-minded Catholics would respond, “You better believe it!”

But remember who is speaking – a self-proclaimed Bergoglian “eco-Catholic” with a particular devotion to Laudato Si’ – who recently lamented in National Catholic Reporter:

In fact, claiming to be pro-life (sans pro-environment) has become the only “litmus test” for a candidate’s qualification for office.

Yes, heaven forbid one not treat tree frogs and old growth trees with the same reverence as terminally ill or unborn human beings.

Let us also keep in mind for whom he is writing – Commonweal; i.e., the slant here is that withdrawal from our debased, Christ the Kingless modern society and the Almighty Council that dethroned Him is something of a sin – not exactly the sort of treatment I would like to recommend, even inadvertently, to those who may not know any better.

This, as I said, is just as one should expect from such a publication; i.e., no surprises there.

Even so, Wright is pleased to conclude, in spite of all this, “But the Latin Mass has a place for me.”

All in all, not a terrible article given the source, and like I said, we can be genuinely pleased to know that this man is frequenting the Mass of Ages with his children, and can only hope and pray that he goes the distance in what may, or may not, be his journey to tradition.

What is a bit surprising, at least to me, however, is the aforementioned unqualified joy with which the article has been received in some traditional circles.

Rorate, for example, was pleased to link to the article, while stating:

The Commonweal piece seems particularly important to us because it shows it is possible to have a different sensibility to certain themes of Catholic social doctrine and still appreciate the Mass that was the same and only known by all great Catholic social reformers of the history of the Latin Church. The Traditional Mass really is not about a particular kind of political preference, but it is all about love for the most sacred thing on Earth: the Blessed Sacrament of the Altar.

The Traditional Latin Mass is the birthright of each and every Catholic. To each one of them, regardless of their political leanings, we say: Welcome Home!

No, I’m sorry, there is little evidence to suggest that Michael Wright (to say nothing of the typical Commonweal subscriber) suffers from little more than a particular kind of political preference that, at the end of the day, really isn’t all that important. In fact, the opposite seems fairly certain.

Never mind the fact that Hell bent devotion to radical Bergoglian environmentalism, which cannot be divorced from the population control agenda (as evidenced if not by Wright’s musings than by the Pontifical Academy of Sciences’ guest list) is like a bottle of red compared to the bottle of white that is a more “traditionally Catholic” political preference.

In reality, the Traditional Mass, while not “about” a particular kind of political preference, most certainly does, when truly embraced, give rise to one; namely, the Social Kingship of Our Lord Jesus Christ, and authentic love for the Most Blessed Sacrament of the Altar requires one to labor for its establishment.

Yes, “political leanings” matter a great deal, unless, of course, one buys into the separation of Church and State lie.

Now, I don’t believe for a moment that this describes the good people at Rorate, I simply think that their enthusiasm in this case happened to trump their better judgment.

I also don’t believe that it is wise for traditionalists to shout “Welcome Home!”  to proponents of leftwing political initiatives simply because they’ve shown up for the Latin Mass for a period of time.

To do so is to make a caricature of the so-called “traditional movement;” one that falsely reduces it to little more than a liturgical dispute as opposed to what it truly is:

A battle for the heart of the Catholic Faith vis-à-vis the Sovereign Rights of Christ the King.