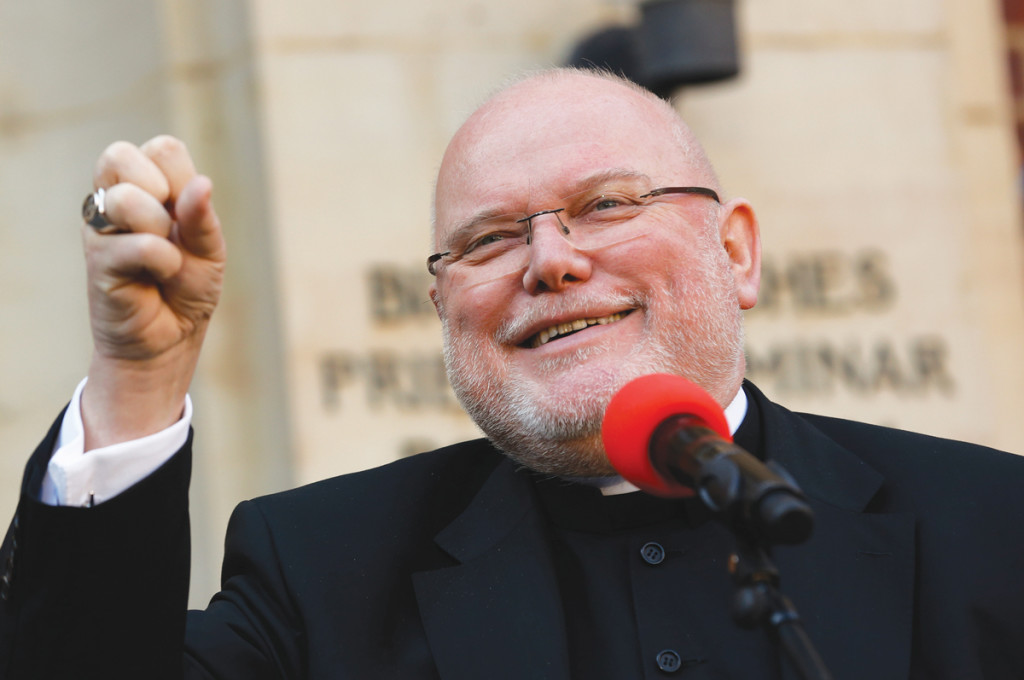 Dr. Maike Hickson, whose insights into the activities of the Church in Germany has consistently proven invaluable, is reporting that Archbishop Luis Ladaria sent a letter to Cardinal Reinhard Marx informing him that Francis does not want the German Bishops Conference to publish their controversial handout for allowing Protestant spouses of Catholics to receive Holy Communion under certain conditions.

According to Dr. Hickson, the key portion of the letter, which Archbishop Ladaria indicated is offered “with explicit approval of the pope,” states:

Our conversation on 3 May 2018 made it clear that the text of the [German pastoral] handout raises a set of questions which are of eminent importance. The Holy Father therefore has come to the conclusion that this document is not ripe for publication.

Readers may recall that the above referenced meeting is the one that took place in Rome between certain members of the German Bishops Conference and representatives of the Holy See to discuss the former’s controversial so-called “pastoral handout.”

During the meeting, held in German, Archbishop Ladaria explained that Pope Francis appreciates the ecumenical commitment of the German Bishops and asks them to find, in a spirit of ecclesial communion, a possibly unanimous result.

Apparently, the Conference has thus far been unable to find unanimity.

If so, they shouldn’t be – if for no other reason than the fact that it has been only one month since the bishops were given the task of reaching consensus, and thirty days in Church time is like five-and-a-half minutes for you and me.

Bottom line: Francis didn’t really expect the bishops to arrive at unanimity, ever – not even in a month of Sundays.

Look, I really don’t like the I told you so game, but…

Following the May 3rd meeting, I said that the request for the bishops to seek a unanimous result was ultimately meaningless; i.e., it was never anything more than a red herring. Everyone with a pulse already knows very well that Francis desires intercommunion with Protestants; not just in Germany, but everywhere.

As I wrote at the time:

As far as the man that some still call “Holy Father” is concerned, the German Bishops’ proposal is A) matter of “Christian unity;” B) one that pertains to “the doctrine of the faith” as a whole, and C) is entirely doable – not just for Germany – but Universally.

Mark my words, folks, barring either Divine intervention or the death of this heretical despot, the time will come when Bergoglio will insist upon the creation and implementation of norms for the Universal Church that reflect his unholy will.

Well, my friends, those wheels are turning right before our very eyes, and, to be very honest, sooner than I ever imagined.

As reported by Dr. Hickson, Archbishop Ladaria gave the following reasons as to why Francis has decided against publication of the handout:

– The matter addressed therein “touches upon the faith of the Church and is relevant for the Universal Church.”

– It also “has an effect upon the ecumenical relationships with other churches which cannot be underestimated.”

On this latter point, Archbishop Ladaria indicated that several dicasteries have thus been given “the task to clarify soon these questions on the level of the Universal Church.”

Seriously, folks, does anyone really believe that the desired outcome is even remotely in question here? (HINT: Think Synods on the family, Amoris Laetitia, Buenos Aires guidelines, AAS…)

In reaction to news of Ladaria’s letter, the Austrian Catholic website Kath.net is suggesting that this marks the second time Rome has ruled against the German intercommunion  handout.

Ladaria’s letter specifically states that the handout “is not ripe for publication.” In this, Rome isn’t even hinting that their policy cannot happen; rather, they are simply saying not yet.

In so many words, the letter tells us. It’s because the Head Heretic won’t be satisfied unless and until the intercommunion cancer is allowed to infect the entire Body.

Don’t be fooled: It takes just a handful of sentences on CDF letterhead to rule against the German proposal.

A well-publicized meeting in Rome with various Curial heads, and a follow-up letter saying that the “pope” (if you will allow) has charged several dicasteries with “the task to clarify soon these questions on the level of the Universal Church” can only mean one thing:

Unless God should intervene beforehand, intercommunion with Protestants is officially coming to your diocese, and what’s more, there’s good reason to believe that it may be coming soon.

In my previous post on this topic, I said that Bergoglio happens to be diabolically subtle enough to play the long game; that is, to bide his time until he believes that the moment is at hand to unveil the universal norm he desires.

Forget about the long game; as things stand today, all indications are that he is rather anxious to get this particular show on the road.