Home
Blog Post
Fool me once, shame on you… 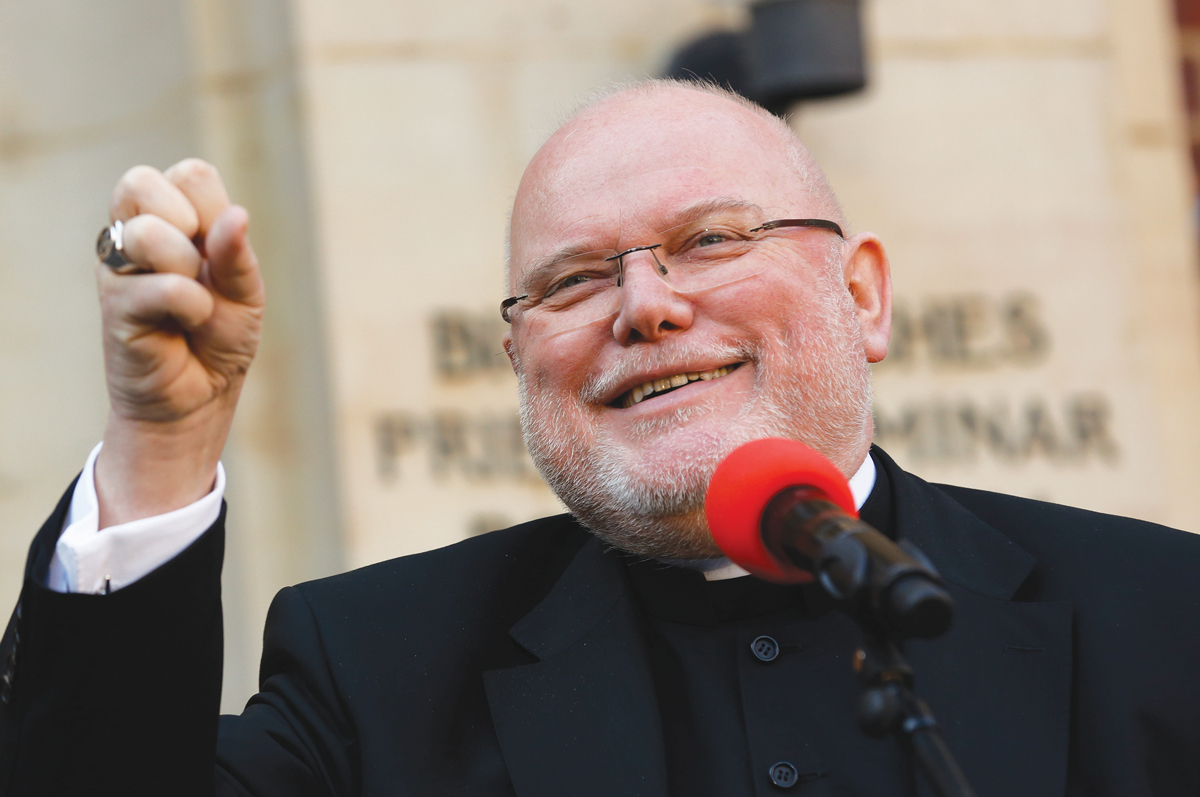 Much has been made of the May 3rd meeting that took place in Rome between certain members of the German Bishops Conference and representatives of the Holy See to discuss the former’s controversial so-called “pastoral handout” allowing the Protestant spouse of a Catholic to receive Holy Communion under certain Bergoglian conditions.

According to the German Bishops’ news service:

A precondition is that the Protestant partner “after a deep discernment in a spiritual conversation with the priest or another pastoral worker comes to the decision of conscience to affirm the Faith of the Catholic Church, as well as to end a ‘serious spiritual situation of emergency’ and to wish to fulfill the yearning for the Eucharist,” according to the final report. (see article at LifeSite News)

In mid-April, it was initially reported by the usually reliable Edward Pentin of National Catholic Register that the Holy See, at the direction of Francis, had rejected the proposal:

Sources confirm that, with the Holy Father’s approval, the Vatican’s head of doctrine has thrown out the bishops’ proposal allowing Holy Communion for some Protestant spouses, but the Pope wishes the rejection letter to remain secret.

We now know that this isn’t true as the May 3rd meeting in Rome resulted in the following report from the Vatican Press Office:

During the meeting, held in German, Archbishop Ladaria explained that Pope Francis appreciates the ecumenical commitment of the German Bishops and asks them to find, in a spirit of ecclesial communion, a possibly unanimous result.

In reaction to this, many in Catholic media are reporting that His Humbleness has refused to make a decision.

Cardinal Willem Eijk of Utrecht has strongly criticized Pope Francis for declining to answer questions about the German bishops’ proposal for intercommunion. “The Holy Father should have given the delegation of the German episcopal conference clear directives, based on the clear doctrine and practice of the Church,” the cardinal said.

If there is anything to the old saying, Fool me once, shame on you; fool me twice, shame on me, there’s an awful lot of shame to go around in this case, to say nothing of the preponderance of fools.

C’mon, folks. We’ve seen this act before, haven’t we?

It is perfectly obvious that Francis has indeed given clear directives in this case; for one, just by calling for the meeting, and for another, based on who was present. As for the request that the bishops seek a “possibly unanimous result,” this is secondary and ultimately meaningless.

This tells us everything we need to know:

As far as the man that some still call “Holy Father” is concerned, the German Bishops’ proposal is A) matter of “Christian unity;” B) one that pertains to “the doctrine of the faith” as a whole, and C) is entirely doable – not just for Germany – but Universally as the latter Pontifical Council’s mandate “consists above all in the interpretation of the laws of the Church.”  (see its official Profile)

While it is true that the Amoris Laetitia affair, Bergoglio’s apparent silence in the face of public admonishments like the dubia, and his endorsement of the guidelines established by the Bishops of Buenos Aires are instructive in the present case, that sword cuts both ways.

Many have criticized the “confusion” resulting from Amoris Laetitia vis-à-vis the fact that the guidelines for the reception of Holy Communion in one nation may differ entirely from those of a neighboring region; the charge being that this undermines the unity of the Church and is thus untenable.

Bergoglio also finds this untenable! He just happens to be diabolically subtle enough to play the long game.

Mark my words, folks, barring either Divine intervention or the death of this heretical despot, the time will come when Bergoglio will insist upon the creation and implementation of norms for the Universal Church that reflect his unholy will.

At best, he is willing to temporarily tolerate faithfulness to Catholic tradition as a means to an end; ultimately, however, he lives to crush it.

All of this having been said, neither the Amoris Laetitia affair nor the German Bishops’ “pastoral handout” scandal are exclusively Bergoglian in nature; rather, they are conciliar.

Much has been written in this space with regard to the former. As for the latter, one need only look at the 1983 Code of Canon law, which was created specifically to reflect the Council’s novelties:

Let’s dissect this lunacy, shall we.

And just what might that be? Answer: Whatever in the Hell one wants it to be!

With this in mind, is it really all that shocking that the German Bishops cite a “serious spiritual situation of emergency” as a condition for the reception of Holy Communion by a Protestant who rejects the Catholic faith but still wants the gifts dispensed therefrom?

This is the key to understanding this entire dust up.

It’s no secret that Jorge Bergoglio doesn’t really believe that the Blessed Sacrament is the Body, Blood, Soul and Divinity of Christ, but neither does the conciliar church itself!

How do we know this?

Just connect the dots. As Canon 844 § 4 clearly implies, the Most Holy Eucharist is simply the Catholic version of the “it” that is handed out in the heretical communities.

And where did this notion come from?

The seeds were planted at the almighty Council:

The brethren divided from us [Editor’s note: the heretics] also use many liturgical actions of the Christian religion. These most certainly can truly engender a life of grace in ways that vary according to the condition of each Church or Community. These liturgical actions must be regarded as capable of giving access to the community of salvation. (UR 3)

He that eateth my flesh and drinketh my blood abideth in me: and I in him. As the living Father hath sent me and I live by the Father: so he that eateth me, the same also shall live by me. This is the bread that came down from heaven. Not as your fathers did eat manna and are dead. He that eateth this bread shall live for ever. (cf John 6)

If, as the Council states, the “liturgical actions” carried out by the heretics (the “it” of Canon 844 § 4) is capable of engendering “salvation,” well then, it must be the same that Catholics receive that we may “live forever” just as Jesus taught.

Many are fooled by this caveat, but let’s not be among them: The “Catholic faith” to which it refers is not the immutable Faith that comes to us from the Apostles, but rather the conciliar faith that we just reviewed.

The local competent authority of the interested non- Catholic Church or community.

Notice that Canon 844 § 4 doesn’t require the input of the Holy See, but does insist upon “consultation” with a heretic community leader (aka, the owner of the local Protestant Christo-business.)

Why should this be so?

Well, because the almighty Council said that these heretical operations are such that “Christ has not refrained from using them as means of salvation!” (ibid.)

In other words, it’s a courtesy to Christ (more properly, the conciliar caricature thereof) to confirm that the heretic make-believe minister / business owner is OK with the Catholics serving “it” to a person that by all rights is their customer.

I’ve said it before and it bears repeating…

In a twisted way, the Bergoglian regime is a Godsend in that it is so plainly at war with the Catholic faith that only a fool can possibly deny the real problem.

The God of Surprises: Go dancing with the stars!