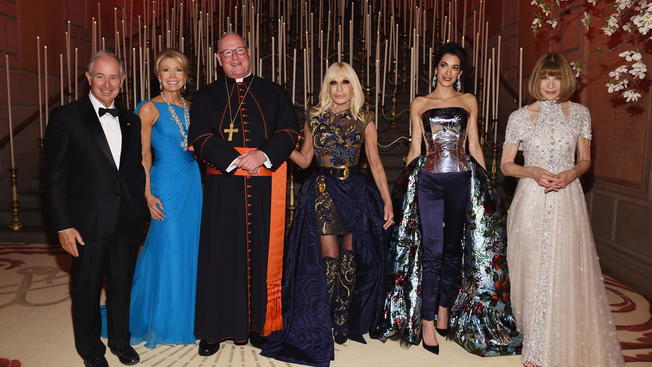 On May 7, the Metropolitan Museum of Art held its annual Met Gala, this one titled “Heavenly Bodies: Fashion and the Catholic Imagination.”

In addition to kicking off an exhibit displaying priceless papal vestments and other regalia spanning fifteen different papacies on loan from the Vatican, the event also featured a parade of celebrities, many of them scantily clad, wearing an array of blasphemous outfits that served to make a mockery of the Catholic faith. 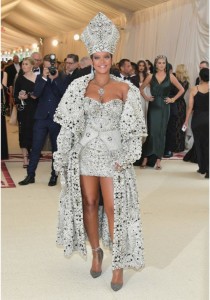 Present at the Gala was the glad-handing buffoon Timothy Dolan, the Archbishop of New York, who was instrumental in securing the Vatican’s support for the event and even lent one of his miters to pop star Rhiana (pictured on the right).

Dolan conceded that the miter was a good match for the pop star’s beaded white corset dress with matching jacket and clutch… “There were some aspects that looked like kind of a masquerade party, a Halloween party,” he conceded. “I didn’t really see anything sacrilegious…”

Nothing sacrilegious? Decide for yourself. 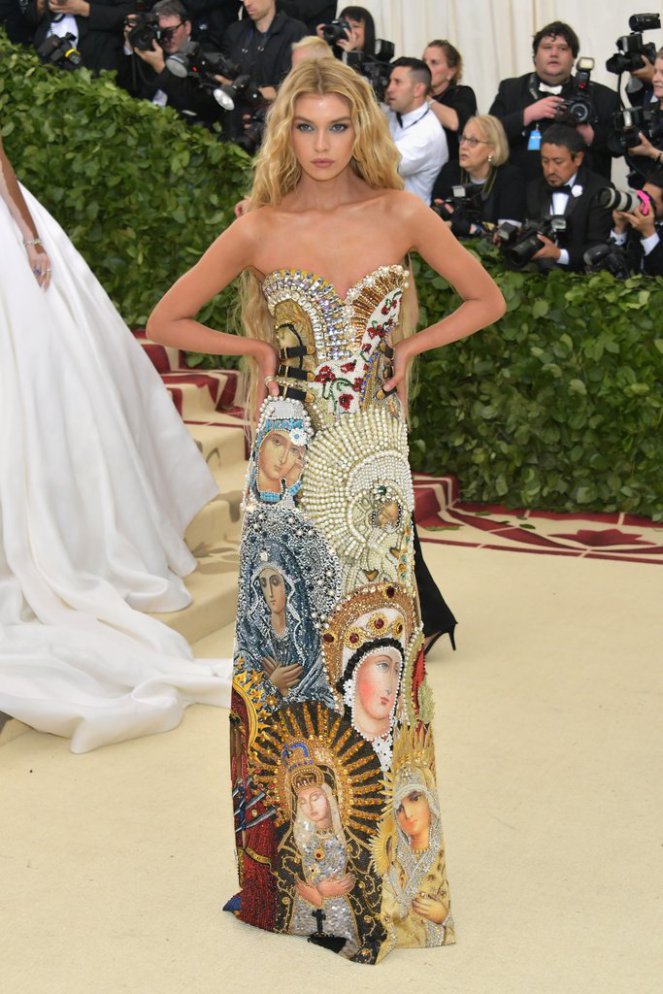 According to The Wrap:

“I was teasing my auxiliary bishops, who were teasing me about Rihanna and I said, ‘Hey, you guys should not complain because she’s volunteered to do some confirmations,’” Dolan joked.

These people aren’t even pretending to be Catholic any more. And why should they? Neither does their leader. (#FAKE POPE)

In any case, according to Edward Pentin of National Catholic Register:

The Pontifical Council for Culture chose to collaborate with an exhibition at the Metropolitan Museum of Art in New York because of the Met’s significance to culture and potential global outreach, but officials were unaware of the widely criticized gala that took place on Monday night.

Cardinal Gianfranco Ravasi, president of the Pontifical Council [and] … The Pontifical Council’s involvement dates back to the latter half of last year. Anna Wintour, the editor of Vogue, a fashion magazine, says she had the idea but struggled to attract the Vatican’s interest, sending many emails but never receiving a response.

The Pontifical Council for Culture wanted the focus to be on the Met’s exhibition of fashion, Catholicism and art rather than Monday’s Gala, viewed by many of the faithful as a sacrilegious mockery of the Church.

Seriously, is there any reason whatsoever to believe that the exhibition, which runs through October, is going to be a testament to Catholic piety?

Eventually, photos of the exhibit itself will surface, and rest assured, they will glorify neither God, nor his Church, nor the Blessed Virgin Mary. Count on it.

In contrast to Pentin’s report, the New York Times is telling a different story: How the Met Got the Vatican’s Vestments.

It was the culmination of years of negotiations, two stalled visits to Rome, and walking the tightrope between Anna Wintour, the powerful editor of Vogue and a Met trustee, and the many powers in the Vatican.

According to the Times, the process of securing the Vatican’s participation began in earnest in June 2016 when curator of the Met’s Costume Institute, Andrew Bolton, made a pre-arranged visit to the Sistine Chapel to meet with the priest who serves as its keeper of the sacristy.

Slate, in a report of its own, dates the beginning of the process even earlier.

Met curator Andrew Bolton has said he first approached the Vatican about this hypothetical exhibit in 2015.

The point is this: It is patently absurd to insist that this event and its related activities took the authorities in Rome by surprise.

As reported by the Times:

The dashing former right-hand man to Benedict XVI, the fashion-plate pope, he is now prefect of the papal household under the more austere Pope Francis. In May 2017, Archbishop Gänswein sat in his stately Apostolic Palace office as Andrew Bolton, curator in charge of the Costume Institute at the Metropolitan Museum of Art, showed him a look book of couture masterpieces that Mr. Bolton felt matched with certain Vatican treasures …

The archbishop gradually became enthusiastic as he and Mr. Bolton discussed the role of beauty in the church and Mr. Bolton explained his vision for the project that would explore the way the Catholic church had served as an inspiration to designers through the centuries. Then things really started rolling.

About his meeting with Archbishop Gänswein, Bolton told the Times, “He’s like a movie star, it’s like meeting George Clooney.”

At this, it is time to give Mr. Bolton a proper introduction. 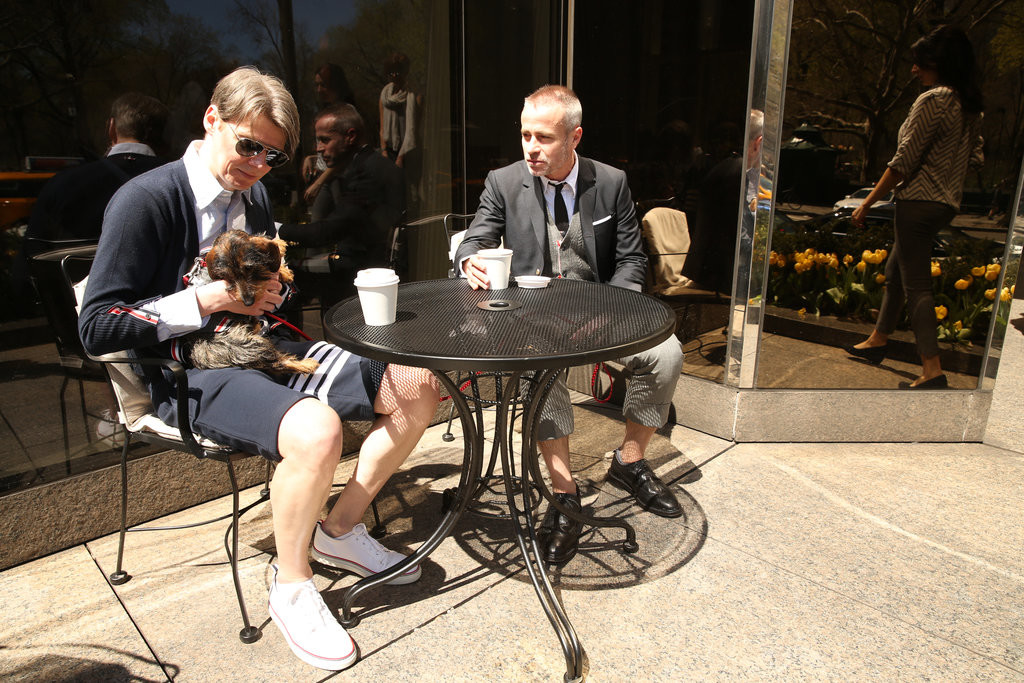 Mr. Bolton, left, and the fashion designer Thom Browne have been a couple for five years. Together they care for a miniature wire-haired dachshund named Hector. CreditMichelle V. Agins/The New York Times, April 2016

The Times went on to report:

Mr. Bolton received authorization from senior Vatican officials to borrow the vestments. He was also granted full access to the Sistine Chapel Sacristy and became so close with its custodian priests in his 10 trips to Rome that they entrusted him with the hidden chamber’s keys and opened secret doors, behind which elderly nuns ironed the pope’s white vestments.

Yes, one can only imagine just how close Mr. Bolton became with any number of Vatican officials. Even so, there was work still to be done back home.

He asked Emily Rafferty, a former president of the Met with connections to New York’s Catholic community, for a hand. She suggested Mr. Bolton work with James Martin, a Jesuit priest and editor at large for America Magazine, who was appointed last year by Pope Francis as a consultor to the Vatican’s Secretariat for Communications.

Father Martin said that one day, after embarrassingly spilling hummus on his pants earlier, he went to a Met conference room to review the storyboards the curators had pinned to the walls with thumbtacks. He was impressed by what he described as the “real attention to Catholic sensibilities” behind the pairings.

Martin, we are told, suggested that Bolton get in touch with Cardinal Gianfranco Ravasi, President of the Pontifical Council for Culture. 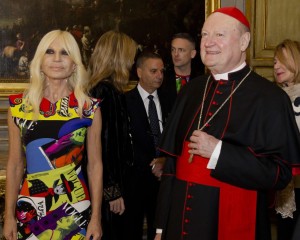 In February, the Met delegation, including Mr. Bolton and Ms. Wintour, traveled to Rome to officially announce the exhibit alongside Cardinal Ravasi, who not only participated in the news conference, but also rubbed shoulders with Donatella Versace. She told him she thought his crimson vestments were beautiful. He said he replied: “The purple is even better.”

And we’re supposed to believe the claim made by Edward Pentin’s sources that “[Vatican] officials were unaware of the widely criticized gala that took place on Monday night”? 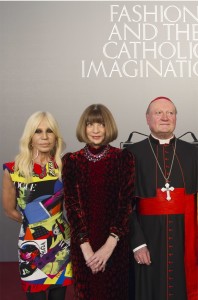 Readers may recall that Benedict the Abdicator stated in his book, The Last Conversations, that as pope he was aware of a Vatican “gay lobby” that was made up of four or five people, but that he managed to break the group up during his pontificate.

Four or five people? Who does he think he’s kidding?

Oh, this reminds me… Whatever happened to that 300 page dossier that was delivered to Benedict prior to his departure; the one that allegedly detailed a vast underground gay network in the Vatican?

Yes, I know, it was handed over to the Argentinian, who shortly after his introduction to the world as Francis the Humble promoted the flaming homo-deviant Battista Ricca to prelate of the IOR (Vatican Bank); the same of whom he famously said, “Who am I to judge?”

From there, he has dedicated his “so-called pontificate” (to quote dear Fr. Gruner yet again) to preparing for, introducing, and then enforcing Amoris Laetitia – a document that was immediately identified on these pages as grease for the gay lobby’s skids. 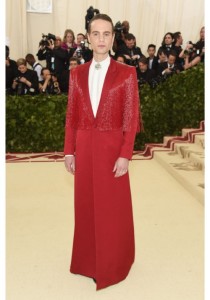 How many cardinals in Rome can identify with this poor soul?

As I recently commented to a friend in light of the Met Gala scandal, I suspect that even the most cynical among us would be shocked to discover just how extensive the Vatican gay network truly is.

Even without knowing for certain how far and high its tentacles reach, simple observation alone suggests that it had at least some kind of hand in Benedict stepping aside. Whether that means that he himself has a bribe-worthy skeleton or two to keep hidden, or that perhaps someone very close to him does, is anyone’s guess.

In any case, all indications are that the Vatican’s gay network not only exists and is powerful, but is quite possibly running the entire show in Rome.