As Cornelia Ferreira observed on these pages last July, a synthesis between many prominent traditionalists and conservatives has been taking place right before our very eyes; a phenomenon that she aptly identified as Conservative-Traditionalism.

Readers of this space have also long lamented the fact that the well-established traditional Catholic apostolates and their media outlets have taken on an ecumenical mindset; one that seeks common ground with neo-conservatives by applauding their hero-prelates whenever they happen to utter a truth, while deliberately ignoring the grave errors and offenses against the Faith that they so often dispense in the process.

Having identified the crisis, it’s now time for all of us to do something about it; for the Glory of God and the salvation of souls. 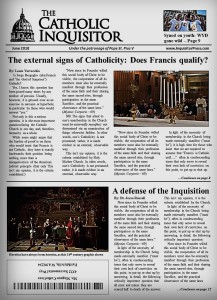 Introducing The Catholic Inquisitor – a traditional Catholic newspaper committed to defending Catholic tradition – every issue, every month – without compromise.

With an impressive line-up of contributors, The Catholic Inquisitor pledges to tirelessly seek the truth, to deliver it to our readers faithfully, and to defend it from every attack regardless of cost and no matter the source – even if it comes from a bishop in white.

Visit The Catholic Inquisitor website now to hear from some of our writers and to learn more.

A new day is dawning in traditional Catholic print media. Become a part of it today.

Sending forth wolves among the lambs