Home
Blog Post
Francis–Kirill Declaration: A slap in the face of Our Lady of Fatima 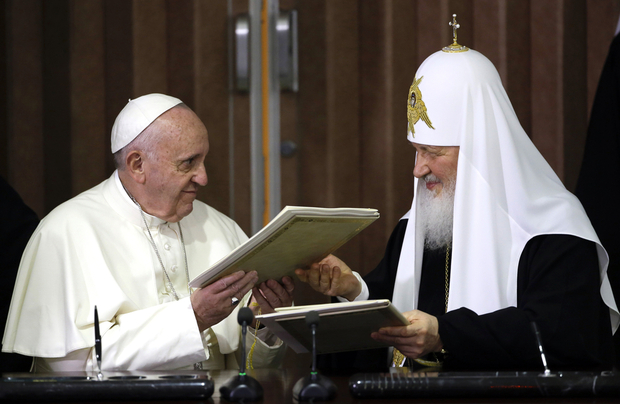 The Joint Declaration cosigned by Pope Francis and Russian Orthodox Patriarch Kirill on 12 February 2016 has been described in any number of ways:

– The signatories themselves anointed it “a sign of hope.”

– Fr. Matthew Schneider (who writes for Catholic Stand), took to Twitter to say that it is “amazing & historical.”

– His Beatitude Sviatoslav Shevchuk, Major Archbishop of Kiev and head of the Ukrainian Greek-Catholic Church, was more realistic, saying that it “creates more questions than answers.”

As I see it, the newly minted Declaration is perhaps best understood as a slap in the face of Our Lady of Fatima delivered by one of the signers in particular – a bishop dressed in white that some have the impression of being the Humble Father.

This is not the first such blow delivered to Our Lady by men who should know better, mind you, just the most recent.

The text of the Declaration is at pains to paint the present day schism as a vestige of the past; as if it is somehow comparable to a petty late night quarrel between lovers who have just awoken to a new day with nary a memory of its cause.

For example, the Declaration begins by framing the encounter of the Pontiff and the Patriarch as a “meeting far from the longstanding disputes of the ‘Old World.’”

It goes on to say, “We have been divided by wounds caused by old and recent conflicts, by differences inherited from our ancestors;” pointing to the “historical divergences we have inherited.”

Though the “longstanding disputes” may have originated centuries ago, the fact remains that the schismatic Russian Orthodox presently lack Christian unity; a unity that can only be restored by their “return to the one true Church of Christ … accepting, recognizing and obeying the authority and supremacy of Peter and his legitimate successors” (cf Pope Pius XI, Mortalium Animos).

In other words, unity is available for all of the schismatics, the Russian Orthodox among them, in just one way; that is, by the grace of God that leads to conversion.

Francis, however, imagines that unity is a fruit of purely human, earthbound, endeavors.

Speaking with the media about his meeting with Patriarch Kirill, he said, “We agreed that unity is created by journeying together.”

In other words, they made a pact to thumb their noses in unison at immutable truth.

Lest anyone fall prey to the fallacy that Francis actually envisions a journey ordered toward the schismatics’ conversion, this idea is nipped right in the bud:

This mission entails mutual respect for members of the Christian communities and excludes any form of proselytism. [Joint Declaration]

Let’s be very clear about what is meant by “proselytism;” not according to my opinion or yours, but according Francis’ own definition.

Recall, if you will, his celebrated Top Ten Secrets to Happiness, wherein item number ten provides the answer:

“But the worst thing of all is religious proselytism, which paralyzes: ‘I am talking with you in order to persuade you’ …”

With this in mind, the Declaration to which Francis agreed can be understood to say:

Persuading the schismatic Russian Orthodox to embrace the fullness of truth that exists in the Catholic Church alone by way of conversion, ‘in any form,’ is excluded.

By contrast, Our Lady of Fatima placed a high priority on the conversion of Russia. She even provided the means by which it will take place; thereby effecting the restoration of Christian unity that the Orthodox presently lack, and all of this by way of one simple request.

The moment has come in which God asks the Holy Father, in union with all the Bishops of the world, to make the consecration of Russia to My Immaculate Heart, promising to save it by this means.

Along with this request, Our Lady attached a solemn promise:

If my requests are heeded, Russia will be converted, and there will be peace; if not, she will spread her errors throughout the world, causing wars and persecutions of the Church.

The conversion of Russia, which can only mean conversion to the Holy Catholic Church, is central to the message of Our Lady of Fatima.

Francis, however, will have none of it:

It cannot be accepted that disloyal means be used to incite believers to pass from one Church to another, denying them their religious freedom and their traditions. [ibid.]

As is often the case when Francis denounces some particular group or activity, no real attempt is made to define exactly what or whom is being condemned; i.e., it is anyone’s guess what constitutes “disloyal means.”

The fact of the matter is, in any case, that the “means” have precious little to do with Francis’ protest; it is the act of conversion itself (this “passing from one Church to another”) to which he objects, as well as the resulting loss of “religious freedom” from the authority of the pope that the schismatics believe they currently enjoy.

This much is made plain just a few sentences later:

It is today clear that the past method of “uniatism”, understood as the union of one community to the other, separating it from its Church, is not the way to re–establish unity. [ibid.]

So, what is this “uniatism” that Pope Francis finds so unacceptable?

The short answer is that it refers to the submission of the schismatics to the authority of the Roman Pontiff while retaining their liturgical and canonical traditions; as in the case of the Eastern Catholic Churches.

With respect to the Joint Declaration, it can be understood as referring to the “conversion of Russia” as the schismatics represented by Patriarch Kirill return to the one true faith. [For a more detailed treatment of uniatism, see HERE.]

That Francis considers proselytism (otherwise known as the mission that Christ gave to His Church) to be “solemn nonsense” is old news. What the Declaration makes explicitly clear, however, is that this position necessarily renders Our Lady’s promises of conversion and peace as given at Fatima “solemn nonsense” as well.

In fact, Francis gives every indication of abhorring the very idea that conversion to the one true Church of Christ has anything whatsoever to do with the pursuit of peace:

Differences in the understanding of religious truths must not impede people of different faiths to live in peace and harmony. In our current context, religious leaders have the particular responsibility to educate their faithful in a spirit which is respectful of the convictions of those belonging to other religious traditions. [ibid.]

There can be no doubt that the message is being heard loud and clear by those who cling to any one of the many false religions of the world:

Accept, honor and reverence Christ the King? Reject, mock and denigrate Him? To each his own, but can’t we all just get along?

In spite of his public displays of Marian devotion before the ever-present humblecam, it would seem that Francis does not believe that the Blessed Virgin can deliver the peace that she promised at Fatima, if indeed he believes that she spoke there at all.

He evidently imagines, like his predecessors apparently did (most notably the Assisi popes), that the attainment of peace will be made possible, not by way of adherence to the desires of Almighty God as made known by Our Lady at Fatima, but in bowing down before the conciliar Golden Calf known as “Almighty Dialogue.”

We urge the international community to seek an end to the violence and terrorism and, at the same time, to contribute through dialogue to a swift return to civil peace … Interreligious dialogue is indispensable in our disturbing times.[ibid.]

To make matters worse, Francis even goes so far as to dictate his own will to the Lord under the guise of offering prayer.

For instance, he dares to ask Christ to circumvent His desire to “draw all men to Himself” through His Holy Catholic Church in favor of effecting a “healthy religious pluralism” (cf EG 255) that is truly nothing more than the product of sin:

We lift our prayers to Christ, the Saviour of the world, asking for the return of peace in the Middle East, “the fruit of justice” (Is32:17), so that fraternal co–existence among the various populations, Churches and religions may be strengthened, enabling refugees to return to their homes, wounds to be healed, and the souls of the slain innocent to rest in peace. [ibid.]

Lastly (not because we’ve exhausted the topic, but for the sake of brevity alone), the Declaration includes the requisite homage to the impoverished:

Our gaze is also directed to those facing serious difficulties, who live in extreme need and poverty while the material wealth of humanity increases. [ibid.]

This is a lovely gesture, this gazing, isn’t it?

I suppose it makes the gazer feel rather good about himself, but let’s be Catholic, shall we:

No amount of gazing, or calling for new economic systems, or bellyaching about inequality, will amount to a hill of beans apart from conversion to the one true faith; the only sure way to temporal prosperity.

Pope Leo XIII made this rather plain when he wrote:

Christian morality, when adequately and completely practiced, leads of itself to temporal prosperity, for it merits the blessing of that God who is the source of all blessings; it powerfully restrains the greed of possession and the thirst for pleasure. [cf Rerum Novarum]

All of these were handed to the Church (and the popes in particular) on a silver platter by Our Lady of Fatima, in return for which Francis has repaid her with yet another slap in the face.