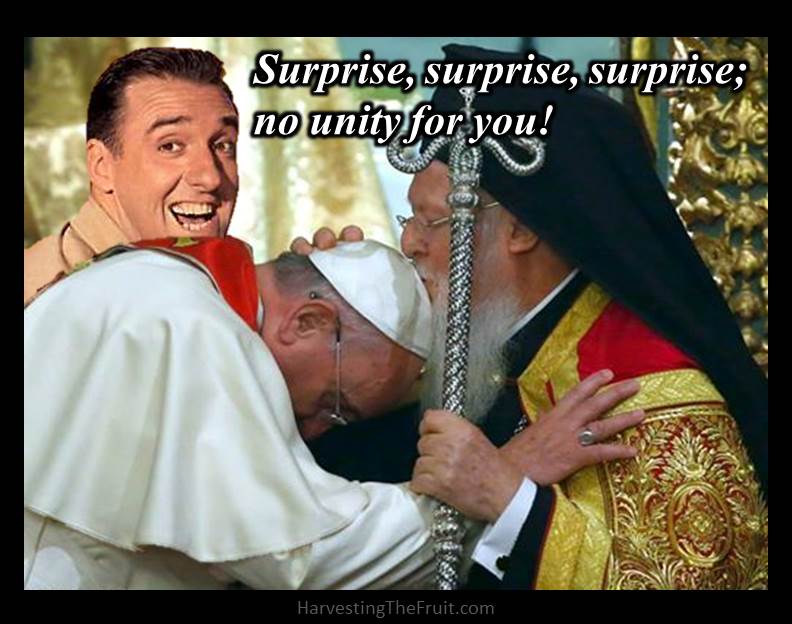 With respect to the Church’s relationship with the schismatic Orthodox Churches, Pope Francis said on his recent return flight back to Rome from Turkey:

Unity is a journey we have to take, but we need to do it together.

If indeed the treatment of Christian unity articulated by Pope Pius XI in Mortalium Animos is a matter of divine faith (and it most certainly is since it is founded on Sacred Scripture and has been constantly held in the Tradition of the Church), then “doing the journey to unity together” with the Orthodox might look something like this:

Orthodox: We recognize and accept the fullness of the Catholic Faith as expressed by sacred Magisterium of the Holy Catholic Church throughout the centuries. As for the Sovereign Roman Pontiff, we recognize not only his Primacy, but we also recognize and pledge to obey his legitimate Universal Authority and his Supremacy, as well as that of his successors.

Sure, Rome might have to clarify certain points of doctrine and iron out some details along the way, but the scenario above is pretty much where the rubber meets the road in this so-called “journey to unity.”

As Pope Pius XI said, “The union of Christians can only be promoted by promoting the return to the one true Church of Christ of those who are separated from it.” (ibid.)

To be sure, Pope Francis has other ideas. Elaborating on the “journey” as he envisions it, he said:

I’ll say something that a few, perhaps, are not able to understand: the Eastern Catholic Churches have a right to exist, but uniatism is a dated word. We cannot speak in these terms today. We need to find another way … We have to continue in the footsteps of John Paul II: “Help me to find a form of Primacy that we can agree on.”

So, what is this “uniatism” to which Pope Francis refers?

For an explanation, let us turn to another Jesuit ecumenist, Fr. Robert F. Taft, S.J., Professor Emeritus of the Pontifical Oriental Institute in Rome, who said in a lecture given in December 2000:

In “Uniatism,” one Church is perceived as an aggressor against a “sister Church” with which it happens at the moment to be in schism, absorbing groups of its faithful deceptively by allowing them to retain their own liturgical and canonical traditions and a certain autonomy. This type of union, considered the result of political pressure reinforced by violence, created not unity but new divisions in an already fragmented Christendom.

To understand “Uniatism” and this negative view of it, one must understand the nature of the reunions of the 16th and later centuries, and of the Eastern Catholic Churches that resulted. Regardless of the intentions behind them, these reunions were not, except in the most formal theological sense, a restoration of the communion that had existed before the schism between East and West. They represented something new in the history of the Church, a departure from the past, which is why the Slavic neologism “unija” was invented to describe it.

Setting aside for the present discussion the rather odd (and oh so Jesuit) suggestion that there is “the most formal theological sense” on the one hand, and a different reality on the other, one wonders from exactly what “past” the reunions of “the 16th and later centuries” departed?

Phenomenologically, the Churches had in fact evolved beyond the pre-Nicene system in which one could still legitimately view the universal Church as a federation of local Churches with no intervening higher structures – as if Canada, for example, were just a collection of towns not united into separate provinces.

Fr. Taft is saying that in order to avoid that dreaded “uniatism” that he and Pope Francis find so intolerable, any future “unity” for the Orthodox Churches must include freedom from the Supreme Universal Authority vested in the Successors of Peter such as it was in the pre-Nicene era.

Ironic, is it not, that if the Pope were to present this same idea to the Society of St. Pius X as a pathway to the canonical recognition that justice alone demands they should have at this very moment, they’d reject it immediately.

Because they like every other authentic Catholic realizes that submission to the pope’s legitimate authority is an essential part of unity!

In any event, the problem with Fr. Taft’s particular brand of antiquarianism lies not only in its disregard for some sixteen centuries of authentic Magisterium, but primarily in the fact that it is based upon a rewriting of history; i.e., such autonomy never truly existed among the “local Churches.”

[For an excellent and approachable treatment of this topic, please see an article by Fr. Ray Ryland written for Catholic Answers entitled, Peter and the Eastern Orthodox.]

You see, as Fr. Taft would have it, the re-establishment of communion with Rome among the formerly schismatic Eastern Rite Catholic Churches didn’t create real unity; rather, it simply replaced one division with another.

So the Orthodox groups that entered into union with Rome were not simply restoring the former, broken unity between a local Church and the Church of Rome, even if this is what they had intended. Rather, they were separating themselves from one entity, their Orthodox Mother Church, and being absorbed into another, the Latin Catholic Church of the West. In short, they were leaving the Eastern Church and being assimilated into the Western Church. Far from restoring the broken communion between East and West, this led to new divisions.

Pope Francis, in saying that “uniatism is a dated word … we need to find another way,” appears to have declared himself to be among those who accept the fallacy that the Bishop of Rome had no supreme authority over the Eastern Churches in the first centuries, and furthermore, it is possible to return to such an arrangement.

Par for the course, I suppose, for a pope who went on record as saying:

Orthodox theology is very rich. And I believe that they have, at this time, great theologians. Their vision of the Church and collegiality is marvelous. (Interview with Corriere della Sera, March 2014)

Indeed, any supposed Papal Primacy that does not include submission to the Universal Supreme Authority of the pope as conveyed upon the Office of Peter by Jesus Christ Himself, is a lie.

Even so, Pope Francis suggests that this new “form of Primacy” and the unity that will supposedly follow is out there somewhere, if only we allow the Spirit to lead the way:

The thing I feel most deeply about on this path toward unity, I mentioned in yesterday’s homily on the Holy Spirit: only the path of the Holy Spirit is the right path; he is full of surprises…

What is interesting to me is that in spite of the fact that the popes for at least the last four decades have been willing to negotiate a false idea of papal primacy that the Orthodox can accept, it hasn’t been done.

In fact, the effort to concoct such an understanding hasn’t even gotten off the ground, and this even though both parties have expressed a sincere desire to make it happen.

And why, one wonders, have their ecumenical dreams thus far been stifled?

Well it might just come as one helluva surprise to Pope Francis, the Vicar of Dialogue, but it seems to me that there is but one plausible answer: the Holy Ghost simply will not allow it.

How do you like that God of surprises now, Holy Father?

Benedict: Still blind to the cause of the crisis

Ten Takeaways from the Pope’s Interview