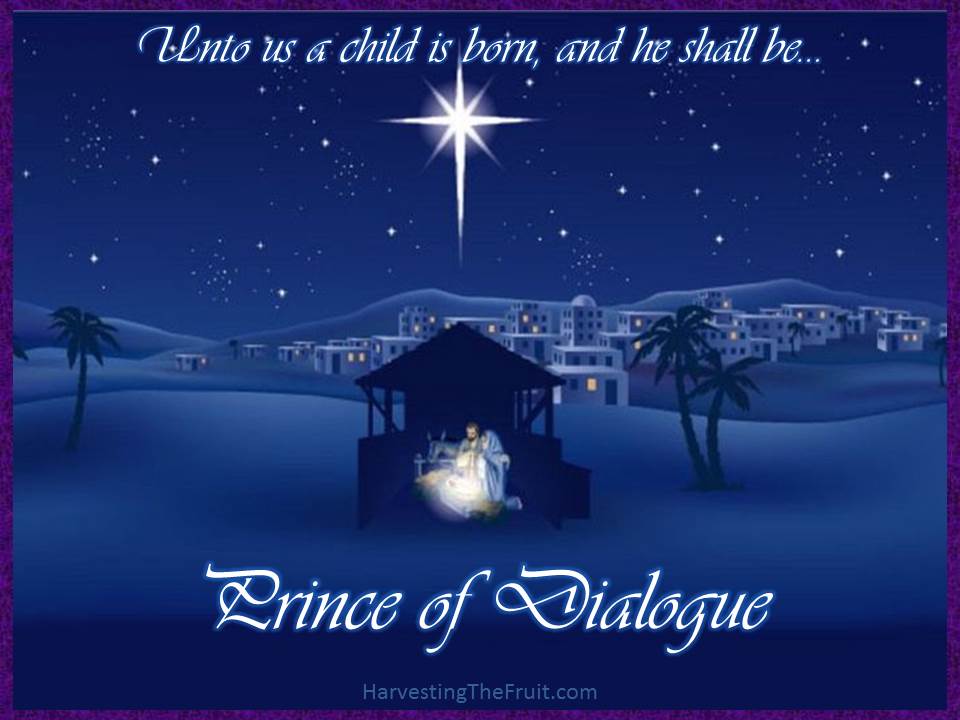 “Unto us a child is born, to us a son is given; and the government will be upon his shoulder, and his name will be called ‘Prince of Dialogue.’” – The Gospel according to Francis, Bishop of Rome

You see, the “Christ” for whom Pope Francis allegedly speaks is not the Christ described by the prophet Isaiah as “the Lord seated on a high and lofty throne, with the train of his garment filling the temple;” no, not by a long shot, his is but a diminished and distorted Christ.

This explains why the statement of Pope Francis to the Third Summit of Christian and Muslim Leaders yesterday concluded, not with a plea to follow Christ, the  Prince of Peace, but with the earthbound slogan, “This is the way of peace: dialogue.”

Oh, well… that’s just Francis being Francis, the same who recounted this heartwarming tale on the flight back to Rome from Turkey just a few days earlier:

On interreligious dialogue… I had what was probably the most wonderful conversation about this with the President for Religious Affairs and his team. When the new Turkish Ambassador to the Holy See came to deliver his Letters of Credence, over a month and a half ago, I saw an exceptional man before me, a man of profound piety. The President of that office was of the same school. They said something beautiful: They said:

This is a beautiful thing: men and women who meet other men and women and share experiences.  We are not just talking about theology but religious experience. And this would be a beautiful step forward, beautiful. I really enjoyed that meeting. It was excellent.

In his magnificent encyclical Pascendi Dominici Gregis, Pope Pius X seems to have been speaking about the current Bishop of Rome when he wrote:

For the Modernist Believer it is an established and certain fact that the divine reality does really exist in itself and quite independently of the person who believes in it. If you ask on what foundation this assertion of the Believer rests, they answer: In the experience of the individual …

They assert, therefore, the existence of a real experience, and one of a kind that surpasses all rational experience. If this experience is denied by some, like the rationalists, it arises from the fact that such persons are unwilling to put themselves in the moral state which is necessary to produce it. It is this experience which, when a person acquires it, makes him properly and truly a believer. (cf Pascendi 14)

This explains why modernist thinkers, like Pope Francis, consider interreligious dialogue, wherein an exchange of religious experiences takes place, a reasonable substitute for evangelization, and if you don’t “get it,” this is due primarily to your lack of humility – you narcissistic, authoritarian, self-absorbed, promethean neo-pelagian, you!

In truth, it is more accurate to say that the modernist attitude embraced by our current Holy Father effectively extinguishes the flame of evangelization; i.e., it renders proselytism “solemn nonsense.”

You see, whereas the Church, from the time of Pentecost forward, has always carried out a mission ordered on teaching the fullness of truth and baptizing the nations; making believers out of non-believers (those who follow a false religion or no religion at all), for the modernist, there are but precious few non-believers in the world, if indeed there are any. Rather, all of us – Catholic (provided one isn’t too traditional), Muslim, Jew, heathen and heretic  – are all true believers, each with a unique experience of the divine!

How far off we are here from Catholic teaching we have already seen in the decree of the Vatican Council. [Note: The First Vatican Council, that is.]

Here it is well to note at once that, given this doctrine of experience united with the other doctrine of symbolism, every religion, even that of paganism, must be held to be true. What is to prevent such experiences from being met within every religion? In fact that they are to be found is asserted by not a few.

And so it is that Pope Francis, in Evangelii Gaudium, even went so far as to suggest that even pagan rituals find their inspiration in sanctifying grace; the same that Catholics understand to be accessible to man only via the sacrament of baptism:

Non-Christians, by God’s gracious initiative, when they are faithful to their own consciences, can live “justified by the grace of God”, and thus be “associated to the paschal mystery of Jesus Christ”. But due to the sacramental dimension of sanctifying grace, God’s working in them tends to produce signs and rites, sacred expressions which in turn bring others to a communitarian experience of journeying towards God. While these lack the meaning and efficacy of the sacraments instituted by Christ, they can be channels which the Holy Spirit raises up in order to liberate non-Christians from atheistic immanentism or from purely individual religious experiences. (Evangelii Gaudium 254)

Always with the “religious experiences,” this one!

Returning to Pascendi, Pope Pius X, as if staring across the years directly into the eyes of Pope Francis, continued:

And with what right will Modernists deny the truth of an experience affirmed by a follower of Islam? With what right can they claim true experiences for Catholics alone? Indeed Modernists do not deny but actually admit, some confusedly, others in the most open manner, that all religions are true. (ibid.)

With all of this in mind, we might better understand what moved Pope Francis to tell a gathering of Muslim and Christian refuges earlier this year:

Sharing our experience in carrying that cross [the hardships associated with refugeeism], to expel the illness within our hearts, which embitters our life: it is important that you do this in your meetings. Those that are Christian, with the Bible, and those that are Muslim, with the Qur’an. The faith that your parents instilled in you will always help you move on.

You see, the reason the current Bishop of Rome is so often pleased to behave as if the false religions of the world are every bit the pathway to God as the Holy Roman Catholic Church is simple, he is infected with modernism.

He is, after all, the Vicar of Dialogue.

BREAKING: Francis responds to the dubia