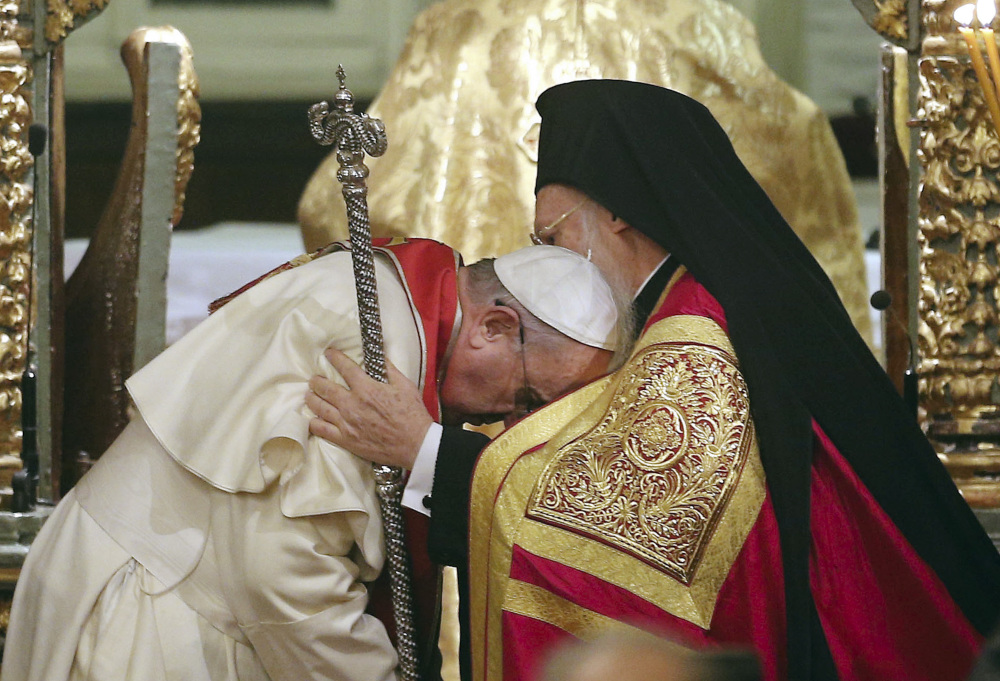 What do the two men in this image, Pope Francis and Patriarch Bartholomew, have in common? Neither one believes in the authority of the pope as understood by the Catholic Church.

In a letter to the Bishops of France, Pope St. Pius X wrote of the Sillon, a socio-political movement that formally existed there from 1894-1910:

Their leaders are self-confessed and irrepressible idealists … they have a particular conception of human dignity, freedom, justice and brotherhood… In an attempt to justify their social dreams, they put forward the Gospel, but … interpreted in their own way; and what is even more serious, they call to witness Christ, but a diminished and distorted Christ. (Notre Charge Apostolique)

Sound like anyone you know? (HINT: Think bishop in white…)

In one of his many homilies lashing out at tradition-minded Catholics, Pope Francis said:

This raises some questions; first, what exactly is a “triumphalist”?

Triumphalism: a term of reproach leveled at the Catholic Church for the claim that she has the fullness of divine revelation and the right to pass judgment on the personal and social obligations of humankind. (Etym. Latin triumphus, public rejoicing for a victory.)

Furthermore, we might ask, what precisely is this “real” Resurrection that some Catholics, according to Pope Francis, tend to exaggerate?

According to Pope Pius XI, writing in Quas Primas, it was the Resurrection from whence Our Lord:

Took the opportunity to call himself King, confirming the title publicly … solemnly proclaiming that all power was given Him in heaven and on earth …  words that can only be taken to indicate the greatness of His power and the infinite extent of His kingdom.

In fact, we might wonder how Pope Francis could imagine that it’s even possible for the human mind to conceive of something that’s more majestic still.

The answer is at once simple and tragic; it is because his is a view of the Resurrection that pales in comparison to the “real one,” and that necessarily means that he, like the leaders of the Sillon, witness to a “diminished and distorted” Christ.

Such a view necessarily gives rise to a similarly diminished and distorted view of the priesthood, and therefore the papacy itself.

The ministerial priesthood is one means employed by Jesus for the service of his people, yet our great dignity derives from baptism, which is accessible to all. The configuration of the priest to Christ the head … does not imply an exaltation which would set him above others.

Consider very carefully what Pope Francis is saying here: He is telling us that the dignity derived from priestly ordination is no greater than that of baptism – something that even the heretics have received!

If the faithless modern world has stripped the priest of that halo of veneration with which he was formerly crowned, it is more than necessary that in our times he should by his bearing win once again the people’s respect for his high dignity and propriety. [Pastoral Letter to the Clergy of the Diocese of Mantua, 25 August, 1895]

For greater insight into the prevailing view of the priesthood, and by extension the papacy, among the current Holy Father’s inner circle, consider the words of Cardinal Oscar Andrés Rodríguez Maradiaga, the man handpicked by Pope Francis to lead the group of cardinals advising him on the Curia’s reorganization:

The function of the hierarchy is redefined in reference to Jesus as Suffering Servant, not as “Pantocrator” (lord and emperor of this world); only from the perspective of someone crucified by the powers of this world it is possible to found, and to explain, the authority of the Church.

You see, for him and those who think like him, including the pope, Our Blessed Lord didn’t rise from the dead victorious unto Kingship, but rather as the itinerant preacher who is prepared to be “crucified by the powers of this world” all over again!

Pope Francis, apparently, has great difficulty reconciling “humble service” with the uniquely majestic dignity inherent to kingly authority, as if the two are mutually exclusive.

In truth, Christ the King is the perfect synthesis of these attributes; even as those who act in His person as priests, bishops, and ultimately as His Vicar (the Sovereign Roman Pontiff) are at times persecuted in this world by those who reject Him.

And yet, Pope Francis can only seem to imagine that he is the Vicar of a Christ who is the servant-preacher alone, apart from being the King who reigns over all men and all nations. Thus is his Christology, and likewise his understanding of his own office, rendered “diminished and distorted.”

As such, it’s little wonder that the current Bishop of Rome struggles just to call to himself “pope,” much less behave like one in his relations with those who reject the pope’s God-given authority (e.g., bowing his head to receive a “blessing” from Justin Welby, a heretic layman in a Halloween costume.)

This brings me to the Holy Father’s recent comments to the schismatic Orthodox during his trip to Turkey:

I want to assure each one of you here that, to reach the desired goal of full unity, the Catholic Church does not intend to impose any conditions except that of the shared profession of faith.

Oh how I wish Patriarch Bartholomew would have responded, “Thank you! Please draft the ‘shared profession of faith’ for our review!”

As for what that “profession” would contain, no one can say for certain, but based upon all that has been said thus far, every indication seems to be that Pope Francis imagines a “unifying” profession that does not include any requirement on the part of the Orthodox to acknowledge, much less heed, the authority of the pope.

Upon the Orthodox acceptance of said profession, the million dollar question would finally be answered – at least for those who as yet haven’t reasoned their way to the punchline – and that is, what would the subsequent “unity” look like?

The answer: It would look exactly like it does now, with the Orthodox still performing “Orders of Second Marriage” for the civilly divorced, condoning abortion in limited cases, rejecting the filioque and, of course, the Office of Peter itself.

In other words, the dirty little not-so-well-kept secret is that there is no destination for the ecumenical movement such as it exists in the Church today, no matter how “humble” the man leading the charge may be; there is only endless dialogue, emotional pleas, and symbolic gestures. That’s it.

It can never lead to authentic unity; only the conversion of heathens, heretics and schismatics to the Holy Catholic Church can do that.

The reason the ecumaniacs of today, including Pope Francis, find this simple truth so very difficult to embrace is equally as simple: they call to witness Christ, but a diminished and distorted Christ.