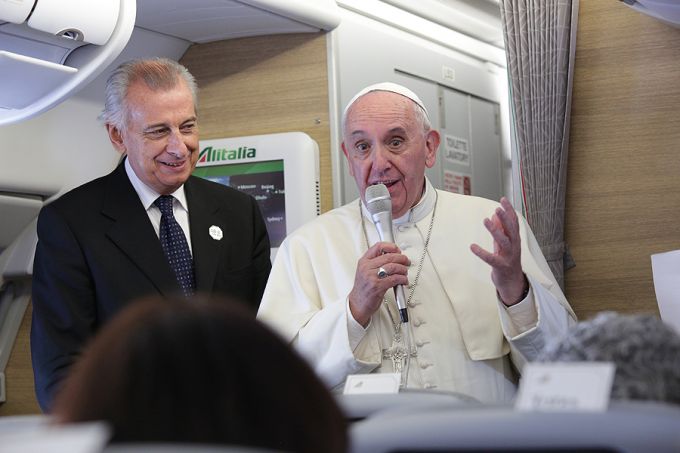 Our friends at the Bergoglio News Agency, otherwise known as Catholic News Agency, have already set about spinning the latest papal protestant moment.

As you’ve no doubt already heard, during the in-flight presser from Mexico to Rome today, His Humbleness was asked by a reporter with respect to the Zika virus:

To which Francis first responded by saying firmly that abortion is not the “lesser of two evils;” it is a “crime.”

[I’ll wait for the neo-conservative applause to die down…]

Moving on to contraception, Francis went on to say:

Paul VI, a great man, in a difficult situation in Africa, permitted nuns to use contraceptives in cases of rape.

Before we talk about the elephant in the room, let’s take a timeout:

Back in 2003, EWTN posted the following Q&A on their website:

Q: I read that the Vatican had approved the use of contraceptives for nuns in Africa. Does that mean that contraception is OK for nuns?

A: No. This is a long-standing rumor–supposedly it occurred in the early sixties before Pope Paul VI’s encyclical, Humanae Vitae–but I have never been able to verify it. The rumor has it that the nuns were in serious danger of being raped and the contraception was to prevent them from conceiving a child through rape. (Answer by Fr. Richard Hogan)

As far as I have been able to determine, the story seems to have originated in Civiltà Cattolica – a Jesuit publication, in 1993. This is the earliest reference to it that I’ve been able to find (and it’s from a secondary source).

In any case, it appears that there’s a chance that this story about nuns contracepting with Pope Paul the Pathetic’s blessing may be nothing more than a rumor.

Let’s assume that the story is verifiable, just for the sake of discussion. What then? That’s just one more reason to put a halt to the Montini canonization (Conciliar Lifetime Achievement Award) cause.

In other words, even if Paul VI personally hand delivered contraception to a bunch of nuns and ordered them to partake, Catholic doctrine on the matter remains unchanged.

Be that as it may, Francis went on to say:

Avoiding pregnancy is not an absolute evil. In certain cases, as in this one, or in the one I mentioned of Blessed Paul VI, it was clear.

It was clear? Really?

How on earth will the Francis Fan Club ever spin this one in order to make His Humbleness appear Catholic, you’re wondering?

Simple; they’ll stick their fingers in their ears go into full blown denial!

Leaders in the field that they are, the CNA article states:

Numerous news outlets suggested that the Pope was introducing a change – or at least a softening – in previous teaching.

However, Dr. Melissa Moschella, a philosophy professor at The Catholic University of America, suggested that this may not be the case.

When talking about avoiding pregnancy in connection with the Zika virus, the Pope may not necessarily have been implying artificial contraceptive use, but may have been referencing Natural Family Planning, she said.

So let me make sure I got this straight…

Some nuns in Africa were in danger of being raped, so Paul VI allowed them to use Natural Family Planning?

Yes, yes… that must have been it. I can see how well that would have worked for the sisters:

Forgive me, Mr. Sexual Predator, but I’m not available until Thursday the 15th. I can see you immediately after vespers.

No, silly. It’s actually even more contrived than that.

The case in question took place in the early 1960s, when the Vatican granted a dispensation to religious sisters living in the Belgian Congo who were in grave danger of rape due to civil unrest to use oral contraceptives.

Now about that elephant in the room…

If these poor nuns were that sure they were in danger of being raped, wouldn’t it have made sense to get them the hell out of there, or perhaps build a wall around their convent? (Oh, yea… Christians don’t do walls… never mind.)

Moschella then took on the role of moral theologian claiming that contraception is not immoral if used as “part of an act of self-defense, as the women seek to resist the act altogether.”

Moschella also explained that in the Africa case referenced by Pope Francis, the dispensation for the nuns was ‘not really an exception if you understand the rule.’

Oh, so contraception has always been morally acceptable in the eyes of the Church provided there is sufficient fear of a potential rape!

Didn’t Francis say carnival time is over? Well, apparently not.

As it concerns the Zika virus and the use of contraception, Moschella did manage to muster up the gumption to say:

In cases of Zika virus, you’re talking about women who are voluntarily engaging in sexual relations and then using contraceptives to prevent those voluntary sexual acts from being fertile. And that does contradict the meaning of the sexual act, and so involves a kind of lack of integrity that’s harmful to the person and harmful to the relationship.

And this, my friends, is why it is so important for the neo-conservative Catholic media to pretend that Francis had Natural Family Planning in mind (setting aside for the present discussion the problems with it) when he cited the alleged precedent of Paul VI whom they claim gave a dispensation for the use of oral contraceptives to nuns who didn’t really need any special permission at all since that sort of thing has always been OK with the Church in cases of self-defense from a rape that hasn’t yet occurred.

There now. That makes perfect sense, doesn’t it?

The winds of change…

Pope Francis and the LGBT playbook