Home
Blog Post
Was the “Smoke of Satan” sermon aimed at Abp. Lefebvre?

So often we hear it said – even in some “traditional” quarters no less – that Paul VI of most bitter memory eventually came to recognize the crisis brought about by Vatican Council II; so much so that he once famously remarked, “…from some fissure the smoke of Satan has entered the temple of God.”

These oft-quoted words were given by Paul VI in a sermon delivered on 29 June 1972 – the Solemnity of Saints Peter and Paul.

The Holy See website has a secondhand account of the sermon in Italian, with no other official translations provided. The text does, however, provide a number of quotes directly attributed to Paul VI; including the well-known “smoke of Satan” comment.

NOTE: In 2006, Fr. Stephanos Pedrano provided an English translation of the text that was initially published on Jimmy Akin’s blog. For this post, we will rely on that translation.

As mentioned in this space a number of times in the past, upon reading the quote in context, one quickly discovers that far from recognizing the Council as problematic (much less diabolical); Paul VI was actually stating the exact opposite.

What may come as a surprise to readers (and, in fact, is a rather recent discovery for me), however, is that Montini’s words may have been intended, at least in part, as a direct rebuke of Archbishop Marcel Lefebvre.

You see, on June 1, 1972 – four weeks before Paul VI decried the “smoke of Satan,” – the Remnant newspaper published an article written by Archbishop Lefebvre wherein he addressed, in no uncertain terms, the post-conciliar crisis in the Church.

Calling attention to the disastrous effects of the Novus Ordo Missae, Archbishop Lefebvre pointed to “the most serious aspect” of the bastard rite as:

…the loss of the faith among so many of the faithful, including priests. The essential dogmas of our Holy Religion are no longer expressed with the same clarity; the faith of the faithful is no longer safeguarded by worship. Protestant errors are spreading rapidly, not only among rank-and-file Catholics, but even among priests.

Archbishop Lefebvre then immediately turned his attention toward the deleterious effects of the Council’s false ecclesiology:

Yet another aspect which is being attacked by those whose aim it is to destroy the Church is the institution and the constitution of the Church.

The necessity of the Catholic Church as the only ark of salvation, outside of which no one can be saved, is now questioned, if not openly denied. The preoccupation with an erroneous ‘ecumenism’ has shaken the true nature of the Church, and this in turn has had disastrous consequences both upon vocations for missionary work and upon the aims themselves which underlie this work.

In just this handful of sentences, the saintly Archbishop laid to waste two of Montini’s pet projects; the so-called liturgical reform, and his unbridled commitment to ecumenism and interreligious dialogue.

Archbishop Lefebvre then went to the very heart of his concern; the destruction of the priesthood. Without specifically naming it, he pointed to the Council’s erroneous description of the priest, which insists that the priest has “the primary duty of proclaiming the Gospel of God to all” (Presbyterorum Ordinis 4). He writes:

Archbishop Lefebvre went on to make a number of predictions about the coming disaster that are no less than prophetic, including:

– Priests “will call upon the services of the lay people.”

– Priests “will be too occupied with politics or government.”

– “Lay people will distribute the Eucharist and take it to the sick.”

– “The day [will come] when the faithful will completely give up the practice of individual confession.”

In light of these things, the Archbishop concludes:

Archbishop Lefebvre even took time to criticize what so many “traditionalists” even today consider to be Paul VI’s greatest accomplishment, Humanae Vitae, for its mistreatment of the ends of marriage. (See HERE)

One need not read between the lines to see how the Archbishop’s words can be understood as an indictment of Paul VI; directly accusing him of being chief among those whose aim it is to destroy the Church.

Perhaps we will never know for sure whether he did or he didn’t, but before we attempt to make an answer for ourselves, let us note precisely who Archbishop Lefebvre understood to be the true leader of this assault against the Catholic faith:

From these painful facts one can see how deep-rooted is this crisis and how cleverly it has been organized and directed. One may indeed believe that the master of this scheme can be no one but Satan himself.

We will conclude this brief survey by pointing out that the master stroke achieved by Satan is to have thrown every one into disobedience by virtue of obedience … This is the cause of the profound confusion which has spread throughout these communities and in the heart of the Church.

Did you get that? Not only did Archbishop Lefebvre blame the crisis in the Church on the effects of Montini’s Council and the Novus Ordo Missae that he promulgated; he portrayed the entire affair as a work of Satan!

Now, let’s take a closer look at the relevant portion of Montini’s sermon of 29 June 1972 as reported on the Holy See website to consider whether or not it amounts to a response:

Referring to the situation of the Church today, the Holy Father [Paul VI] affirms that he has a sense that “from some fissure the smoke of Satan has entered the temple of God.” There is doubt, incertitude, problematic, disquiet, dissatisfaction, confrontation. There is no longer trust of the Church; they trust the first profane prophet who speaks in some journal or some social movement, and they run after him and ask him if he has the formula of true life. And we are not alert to the fact that we are already the owners and masters of the formula of true life. Doubt has entered our consciences, and it entered by windows that should have been open to the light.

After a brief treatment of the role played by science and academia in fostering doubt, Paul VI went on according to the report:

This state of uncertainty even holds sway in the Church.  There was the belief that after the Council there would be a day of sunshine for the history of the Church. Instead, it is the arrival of a day of clouds, of tempest, of darkness, of research, of uncertainty.  We preach ecumenism but we constantly separate ourselves from others.  We seek to dig abysses instead of filling them in.

From there, Montini went on to expound upon the Devil’s role in the crisis as he saw it:

How has this come about?  The Pope entrusts one of his thoughts to those who are present:  that there has been an intervention of an adverse power. Its name is the devil, this mysterious being that the Letter of St. Peter also alludes to.  So many times, furthermore, in the Gospel, on the lips of Christ himself, the mention of this enemy of men returns.  The Holy Father observes, “We believe in something that is preternatural that has come into the world precisely to disturb, to suffocate the fruits of the Ecumenical Council, and to impede the Church from breaking into the hymn of joy at having renewed in fullness its awareness of itself.

As one can plainly see, Paul VI did not imagine that Vatican II opened the door to Satan; rather, he believed that anyone and anything that slowed the spread of the Council’s novelties were under the influence of the demonic!

If we look more closely still, however, we also find evidence suggesting that Montini’s words may have been meant to serve as a counteroffensive aimed specifically at Archbishop Lefebvre and his article, published four weeks earlier.

Below is a limited comparison, which includes some citations previously unmentioned: 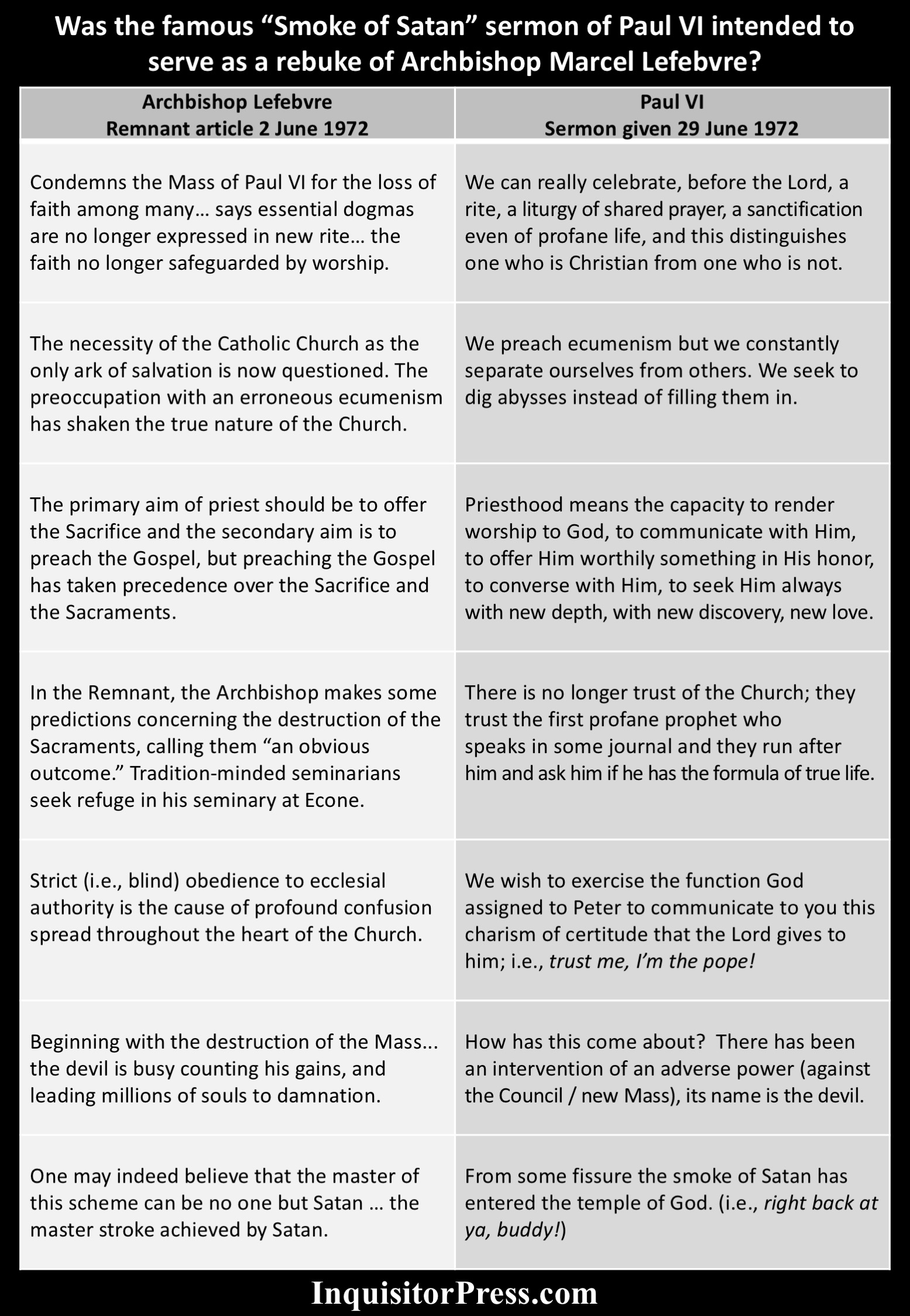 So, was the “Smoke of Satan” sermon of Paul VI aimed at Archbishop Lefebvre as a rebuke for his article, which was published four weeks earlier? Decide for yourself, dear reader.