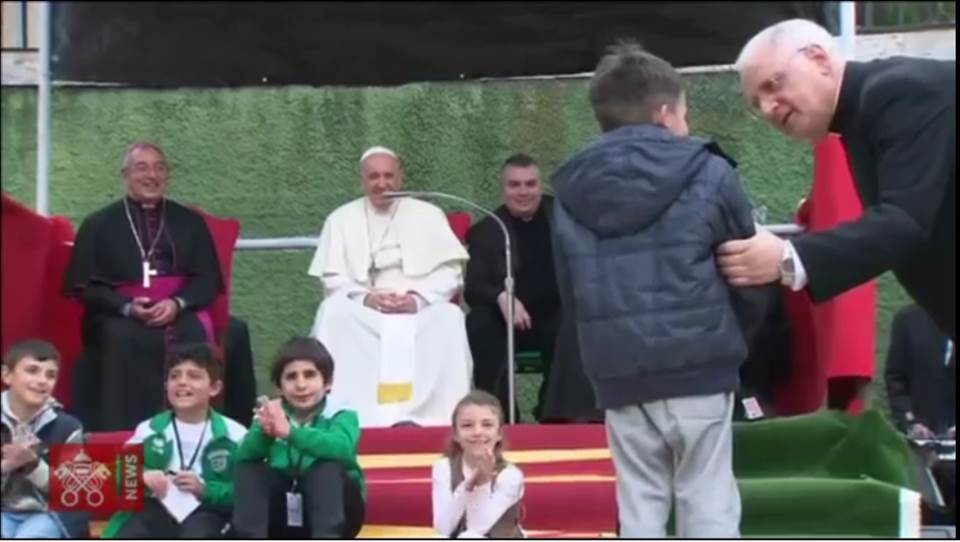 Yesterday afternoon, the Jorge Bergoglio Show was filmed before a live audience at San Paolo della Croce parish in Rome. The truly sickening spectacle that took place there (a portion of which can be viewed in the video clip below) called to my mind the following words taken from the 1971 hit song, American Pie:

What truly died yesterday was the innocence of sweet little children; their trusting hearts ruthlessly sacrificed at the hands of evil men Hell bent on worshiping themselves.

During a highly staged Q&A session, a little girl by the name of Carlotta asked (obviously reading a prepared text):

When we receive baptism, we become children of God and people who are not baptized are not God’s children?

Before we get to the answer, it must be said that truly these men have no shame!

Just imagine the amount of planning and preparation that went into this disgusting display: the scripting of questions, the casting of unsuspecting children for use as props, the strategic pre-production placement of lighting, microphones and cameras in order to record themselves in the act of exploiting these little ones.

The star of the show (stage name, Francis) responded to the question Carlotta was told to ask just as one may have expected. Following are some excerpts:

We are all children of God. Everyone, everyone. Even the unbaptized? Yes. Even those who believe in other religions, far away, who have idols? Yes, they are children of God …

But what is the difference [concerning those who are baptized]?

God created everyone, loved everyone and put conscience in the heart to recognize good and distinguish it from evil … But when you were baptized, in that conscience the Holy Spirit entered and strengthened your belonging to God and in that sense you have become more daughter of God … This Holy Spirit makes us more children of God, gives us more strength to behave like children of God.

Next up was a boy named Eduardo, who asked:

How did you feel when they elected you Pope?

At this, the lead character replied:

So there you have it: Those who pressed Benedict to step aside, the St. Gallen Mafia, and Jorge himself had nothing to do with it – the Lord Himself made the choice!

In any case, Eduardo’s question was written into the script for no other reason than to make it somewhat less obvious that Carlotta was merely setting the stage for the climax of the event; a tear-jerking final question and answer.

At this, we have arrived at the video clip (about 1 minute in length). I invite you to watch it, but be forewarned: It will absolutely break your heart.

Here is what you just saw:

A precious little boy named Emanuele timidly approached the microphone, but he couldn’t bring himself to speak. Francis prodded him, “dai, dai” (literally, “you give, you give,” meaning, come on, come on).

At this, a priest (perhaps the pastor of the parish), who just happens to be nearby standing at the ready, approaches the boy. Watch the video clip again; this time carefully.

The priest takes hold of the boy’s arm, and if you pay close attention, you will notice him give it a firm squeeze as if to bring him to heel. He then gestures toward the stage and evidently tries to take the boy by the hand, but the child pulls it away and covers his face.

The kindly pastor responds by giving him a nice little hug as the people clap. He then proceeds to push Emanuele forward toward the stage; even though he clearly does not want to go.

Bergoglio then begins calling the boy to come (vieni da me) as the priest pushes the poor weeping child forward; ultimately lifting him onto the steps.

It is perfectly obvious that the masterminds of this event planned beforehand to put Emanuele on stage so he could be exploited as a prop. They knew damned well that the boy would break down in tears, and when you hear the question that he was instructed to ask, you’ll understand how.

Once on stage, Uncle Jorge had the boy whisper “his” question in his ear; after which he announced to the audience:

I asked Emanuele permission to say the question in public and he said yes.

Then, as if to quote little Emanuele, he offers:

“A short time ago my father died. He was an atheist, but he had all four children baptized. He was a good man. Is papa in Heaven?“ 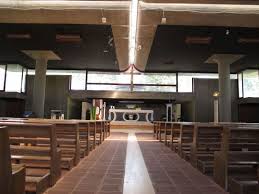 The answer given is once more predictable and perfectly pathetic, but even more condemnable is the crime that was committed against this little boy.

Emanuele appears to be no more than six or seven years old at best, and yet we are supposed to believe that he is worried about the eternal fate of his recently deceased father because he was an atheist?

Don’t get me wrong, a Catholic should have such a concern, but a small boy from a Novus Ordo parish?

Please, tell me who instilled the Faith into this poor child at such a young age. Let me guess… the pastor who hustled him up on stage against his will, right?

But he had all four children baptized. He was a good man.

Yeah, sure, little Emanuele came up with this all by himself.

Folks, this is child abuse, plain and simple.

“But he that shall scandalize one of these little ones that believe in me, it were better for him that a millstone should be hanged about his neck, and that he should be drowned in the depth of the sea.” (Mt 18:6)

I wanna talk about me