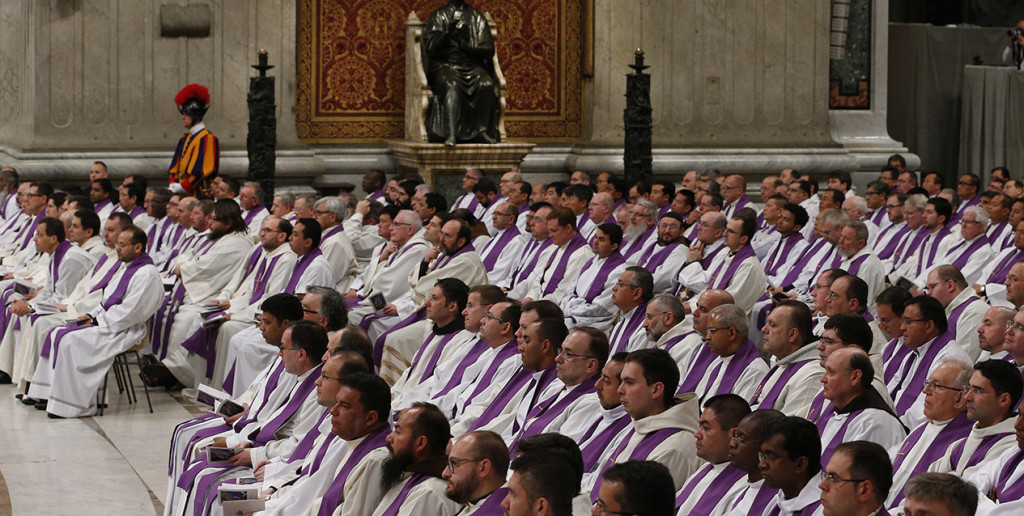 On the liturgical calendar of the Traditional (and only) Roman Rite, April 8, 2018 is properly referred to as the Octave Day of Easter, Sunday of Quasimodo, and Low Sunday.

It also happened to be the second anniversary of the day on which Amoris Laetitia was made public; promoting blasphemy and heresy under the guise of “magisterium.”

Over the past twenty four months, the dictatorial author of this poisonous text has done everything in his power (or apparent power, as the case may be) to see to it that the so-called “pastoral practices” that it inspires are fully integrated into the life of the Universal Church come Hell or high water (even if he isn’t quite sure if the former actually exists).

Most recently, this involved the issuance of yet another ersatz “magisterial” text – Gaudete et Exsultate – the sole purpose of which is to promote Amoris Laetitia and to further intimidate any cardinal or bishop who might even be considering  declaring the obvious; namely, that Jorge Bergoglio isn’t even remotely Catholic much less the Vicar of Jesus Christ. (Fat chance, I know.)

Two days later, Francis met with the so-called “Missionaries of Mercy,” the 1,000 member contingent of priests to whom he granted (as part of a “Jubilee of Mercy” PR stunt) the make-believe mandate to forgive sins allegedly “reserved to the Holy See” even though there are no such things.

The “Missionaries of Mercy” were initially sent forth from Rome – with a one year commission that has since been extended indefinitely – on Ash Wednesday of 2016; roughly two months prior to the publication of Amoris Laetitia and specifically (as we now know) in service to its implementation.

Specifically, the MoMs are called to give make-believe absolution in the Confessional to make-believe penitents lacking a firm purpose of amendment, and this according to the spirit of Amoris Laetitia.

At times we find it hard to make room for God’s unconditional love in our pastoral activity. (AL 311)

The footnote to which reads:

Perhaps out of a certain scrupulosity, concealed beneath a zeal for fidelity to the truth, some priests demand of penitents a purpose of amendment so lacking in nuance that it causes mercy to be obscured by the pursuit of a supposedly pure justice.  (AL footnote 364)

In his address to the MoMs on April 10, Francis made clear his intention to obliterate the sacrament of Confession, this time by once again misappropriating and twisting Sacred Scripture to say whatever suits his diabolical fancy.

For instance, he cited the parable of the prodigal son, saying:

The Church cannot, must not and does not wish to create any barrier or difficulty that many hinder access to the Father’s forgiveness. The “prodigal son” did not have to pass through customs: he was welcomed by the Father, without obstacles.

Isn’t it charming when the “pope” uses sarcasm in his Biblical “exegesis”? How very humble!

The parable of the prodigal son recounts that “while he was still a long way off, his father saw him and was filled with compassion for him; he ran to his son” (Lk 15,20). And he threw his arms around him.

And then he arrived at the punchline:

Sometimes, unfortunately, it can happen that a priest, with his behaviour, instead of approaching the penitent, dismisses him. For example, in order to defend the integrity of the Gospel ideal, the steps that a person takes day by day are neglected. This is not how God’s grace is nourished. Recognizing the repentance of the sinner is tantamount to welcoming him with open arms, to imitate the father of the parable who welcomes his son when he returns home (cf. Lk 15: 20); it means not letting him even finish his words.

First, one notes the perfectly serpentine notion of defending the integrity of the Gospel ideal; with the words “defend” and “integrity” meant to distract the naïve into accepting the lie that the Gospel is merely an “ideal” – you know, like Christian marriage as described repeatedly in Amoris Laetitia.

In the above, we are also witnessing firsthand the slipperiness of the Bergoglian slope.

This assault on Confession started with Amoris Laetitia suggesting that a firm purpose of amendment isn’t necessary. Now, we have Francis encouraging priests to believe that the penitent doesn’t even have to speak; i.e., all he has to do is show up!

This has always struck me: the father did not even let him finish the words, he hugged him. He had the prepared speech, but [the father] hugged him. It means not letting him finish even the words he had prepared in order to apologize (see verse 22), because the confessor has already understood everything, strengthened by the experience of being a sinner too.

In the Bergoglian version of the parable as applied to the confessional, the prodigal son as penitent returned to his father’s house just long enough to get a hot meal and some more of the old man’s treasure; with no intention of leaving his life of squalor behind.

How coincidental (or not) that the Gospel for the Octave of Easter (and the anniversary of Amoris Laetitia) was taken from John 20 wherein Our Lord instituted the sacrament of Confession:

Bergoglio, just like his idol Luther, has apparently decided to simply excise the part that doesn’t tickle his heretical fancy.

He went on to tell the MoMs:

Another Bergoglian strawman; the priest who grills penitents for half-an-hour or more.

In any case, so much for confessing sins in number and kind. The grace that moved the penitent to walk through the door – never mind his actual motives or intent – is enough, according to Francis. Requiring anything more is a violation of something sacred!

When we welcome the penitent, we need to look him in the eye and listen to him to allow him to perceive the love of God Who forgives in spite of everything, He dresses him with the festive robe and the sign of belonging to his family (see v. 22).

We need to look him in the eye…

Speaking of violating a sacred space, in the Bergoglian version, we must sit face-to-face with our confessor; that way it will be more like a Protestant counseling session.

If all that has been addressed isn’t evidence enough that Jorge Bergoglio doesn’t have a Catholic bone in his body, get this…

I return to the words of Isaiah. We find the sentiments of Jerusalem that feels abandoned and forgotten by God: “Zion said: The Lord has forsaken me, the Lord has forgotten me. Can a mother forget the baby at her breast and have no compassion on the child she has borne? Though she may forget, I will not forget you” (49: 13-15). On the one hand, this rebuke to the Lord for abandoning Jerusalem and His people seems strange. With much more frequency, we read in the prophets that it is the people who abandon the Lord.

Yes, you read that correctly. He actually imagines that Sacred Scripture teaches that the Lord abandoned the people. This is the same guy who approves of the reprehensible text produced by the Commission for Religious Relations with the Jews, The gifts and the calling of God are irrevocable.

And then there’s this Bergoglian balderdash, which is perfectly in keeping with his bankrupt Christology… no, make that, Christological heresy, whereby he doesn’t really believe that Jesus is true God:

The God Who loved the world to the point of giving His Son (cf. Jn 3, 16), to the point of abandoning Him on the cross, He will never abandon anyone: His love will always be there, close, bigger and more faithful than any abandonment.

For the benefit of those who have been misled to believe otherwise, when Our Lord speaks from the Cross:

My God, my God, why have you forsaken me?

He is reciting the opening words of Psalm 22, and in so doing is invoking and calling our attention to its entirety. This would have been understood by the Jews, as such was (and still is) their practice. This should be even better understood by Christians today given the triumphant, Messianic prophecy that follows.

Furthermore, it is utterly impossible for God to have abandoned Jesus, whose Divine nature and human nature, joined by hypostatic union, allow of no separation.

Our Lord did, however, experience the pain and the suffering of Divine abandonment that, in justice, is due as a result of the sins of the world; the same that He freely took upon Himself that we might be saved.

In conclusion, while I wish I could report more encouraging news in this space, we mustn’t lose sight of the reason why we simply cannot shy away from addressing this charlatan and his lies head-on at every turn:

For the glory of God and the salvation of souls.