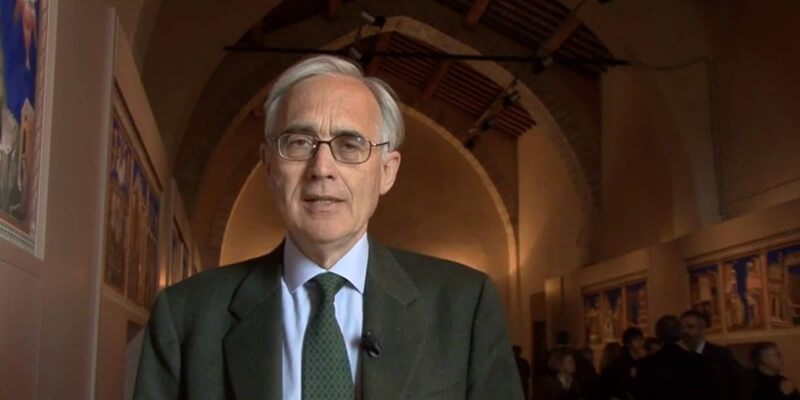 Catholic Family News has published a transcript of Dr. Roberto de Mattei’s talk as given on April 7, 2018 at the CFN Conference; writer Stephen Kokx provided an overview of the same at LifeSite News.

Here, I will touch on some of the more noteworthy parts of the presentation.

Dr. de Mattei is no progressive; not by a long shot. His book, Vatican II – An unwritten story, is magnificent. That said, some of his thoughts are puzzling to say the very least. For one, he states:

The Nota explicativa praevia, [preliminary explanatory note] desired by Paul VI to save the orthodoxy of the document [Lumen Gentium], was a compromise between the principle of the primacy of Peter and that of the collegiality of the bishops.

Especially in light of the pending (FAKE) “canonization” of Paul VI, we need to be clear:

First, it must be said that Dr. de Mattei’s statement is contradictory in itself, as orthodoxy is never “saved” by way of “compromise.”

That said, and more importantly, there is precious little evidence that Paul VI “desired to save the orthodoxy” of Lumen Gentium on this particular point, or any other for that matter. In fact, there is plenty of evidence to the contrary.

Paul VI revealed his true desire when he issued the Apostolic Letter, Apostolica Sollicitudo, which established the Synod of Bishops as we know it. In this document, he listed among the “general purposes of the Synod”:

…to facilitate agreement, at least on essential matters of doctrine and on the course of action to be taken in the life of the Church.

The diabolical nature of this initiative cannot be overstated.

At this point in time it is perfectly clear that Apostolica Sollicitudo quietly, and with a subtlety worthy of the Master Deceiver himself, set the stage where upon the “God of surprises” would one day issue the Bergoglian Trilogy; Evangelii Gaudium, Amoris Laetitia, and Gaudete et Exsultate – each of which is ordered toward laying waste to “essential matters of doctrine” by treating them as if they are subject to legitimate disagreement.

In short, we can thank the Council first and foremost, of course, but in no small measure we owe it to Paul VI for the present Bergoglian scourge on the Mystical Body of Christ.

Synodality, collegiality, decentralization are the words which today express the attempt to transform the monarchical and hierarchical constitution of the Church into a democratic and parliamentary structure.

Indeed! And let us not forget that it was Paul VI who, in addition to establishing the Synod of Bishops to deliberate matters long since defined, with great fanfare relinquished the papal triregnum, thus making plain his intent to transform the monarchical and hierarchical constitution of the Church.

So much for desiring to save orthodoxy.

Of the more interesting, and ultimately troubling, comments offered by Dr. de Mattei concern the matter of Benedict’s so-called resignation.

He states and correctly so:

He later went on to speak of:

… the existence of a false premise, accepted by all: the existence of a sort of papal diarchy, in which there’s Pope Francis who carries out its functions, and then there’s another Pope, Benedict, who serves the Chair of Peter through prayer, and if necessary, with counsel. The existence of the two Popes is admitted as a done deal: only the nature of their relationship is argued. But the truth is that it is impossible that two Popes can exist. The Papacy is not dis-mountable: there can be only one Vicar of Christ.

Truer words were never spoken! And the professor is just getting warmed up:

Benedict XVI had the ability to renounce the papacy, but consequently, would have had to give up the name of Benedict XVI, dressing in white, and the title of Pope emeritus: in a word, he would have had to definitively cease from being Pope, also leaving Vatican City. Why did he not do so? Because Benedict XVI seems to be convinced of still being Pope, although a Pope who has renounced the exercise of the Petrine ministry.

OK, let’s recap the events of February 2013 according to Dr. de Mattei’s observations, shall we.

Pope Benedict XVI, could have renounced the papacy, but in order to do so he would have had to do a number of things that he did not do. And the reason is obvious – he still considers himself Pope; albeit with a diminished sense of responsibility.

There is only one way to add all of this up, folks:

If Dr. de Mattei is correct, the See of Peter simply was not vacant when the conclave assembled in March of 2013; rather, it was still, and continues to be, occupied by Benedict XVI.

I will say it once again: Fr. Nicholas Gruner firmly believed as much, and what’s more, he believed that the topic of Francis’ legitimacy is entirely relevant to the message of Fatima; no matter how desperately certain persons labor to pretend otherwise.

Dr. de Mattei, however, stops short of drawing the obvious conclusion to which his own observations lead, opting instead to take refuge in two magnificently flawed notions, the first of which states:

Canonists have always taught that the peaceful “universalis ecclesiae adhaesio” (universal ecclesial acceptance) is a sign and infallible effect of a valid election and legitimate papacy, and the adhesion or acceptance of Pope Francis by the people of God has not yet been doubted by any of the cardinals who participated in the Conclave.

Note the doublespeak; even if inadvertent:

Does universal ecclesial acceptance concern “the people of God,” or does it pertain only to “the cardinals who participated in the Conclave”?

In either case – and it is my understanding that it is the former, otherwise it wouldn’t be universal – the argument is weak.

For one, how does Dr. de Mattei know whether or not any of the cardinals harbor doubt, much less the people of God at large?

It is my experience (and certainly that of many others) that numerous persons had serious reservations about Francis from moment one; quite the opposite of peaceful acceptance.

The truth is, Dr. de Mattei has no idea just how widely accepted Francis was upon his introduction on the loggia at St. Peter’s, and given the fear that has been gripping Rome for some time, the lack of public statements from members of the hierarchy is hardly evidence that the legitimacy of Francis is not subject to serious doubt.

That said, if indeed the See of Peter was occupied as the conclave met (as Dr. de Mattei appears to believe), then no amount of “acceptance” of a new occupant on anyone’s part – lay or ordained – could possibly change that reality.

Consider as an analogy a married man who by all appearances is unmarried, but is subsequently “joined” in Holy Matrimony to another woman as witnessed by a well-intended priest before a gathering family and friends.

No amount of acceptance and adherence as to the validity of the second marriage can make woman #2 the man’s spouse. Why not? Simple – that “office” was not vacant; rather it was already and presently occupied, and the ignorance of the masses on this note did nothing to change that fact.

The acceptance of a Pope by the universal Church is an infallible sign of his legitimacy, and heals at the root every defect of the papal election (for example, illegal machinations, conspiracies, et cetera). This is also a consequence of visible character of the Church and of the Papacy.

Those who hang their hat on this argument are utterly unable to provide any citations whatsoever in support of it. The best they can do is to cite theologians that affirm (and rightly so) that defects in a validly assembled conclave are healed at the root upon universal and peaceful acceptance of a new pope.

This is a far cry from insisting that a new pope can be made even when the See of Peter is occupied if only the faithful are sufficiently duped into believing that it was vacant.

Finally, and equally as relevant to the present state of affairs in the Church, is Francis’ claim on the papacy in light of his heresy.

… the cardinals would be limited to only certifying the fact of heresy … without exercising any deposition of the Roman Pontiff. The cessation of the primatial office would only be acknowledged and declared by them.

ONE: The heresy of a pope results in his loss of office. Precisely when Christ removes the office from the man (which is precisely what must happen) isn’t germane to the present discussion.

TWO: The cardinals acknowledge and declare the loss of office after the fact.

So far so good, but Dr. de Mattei veers immediately into denial when he states, as reported by Mr. Kokx:

Catholics must “clarify to people that unfortunately [Pope Francis] propagates heresy.”  However, Francis “does not lose his office until his heresy becomes manifest” and widespread. This “has not yet happened.”

For the record, “manifest” in this case is not some esoteric concept that only doctors of canon law can fully grasp; it simply means publicly known as opposed to merely private.

How anyone, never mind a man of Dr. de Mattei’s intellect, can possibly argue that Francis’ heresy is not yet widely known in the public realm is well beyond my imagination! It truly is nothing less than a denial of objective reality.

At this, I will invite you to watch (or re-watch as the case may be) and perhaps share the following video which addresses yet another denial of objective reality; namely, the preposterous notion that Francis has yet to be corrected. (Don’t laugh, the traditional Catholic media magnate who said this was dead serious. No, I won’t name him as that would be most uncharitable.)

The bottom line is this, folks:

Apart from denying what our eyes can plainly see and our ears can clearly hear, one must admit that Jorge Mario Bergoglio is the walking definition of a manifest, formal, pertinacious (add whatever adjective you’d like provided it does not excuse the man) heretic who has severed himself from the Mystical Body of Christ.

Will the cardinals declare it?

Probably not and that’s a crying shame, but then again I don’t need them to tell me that it’s raining outside when my clothes get soaking wet as I’m walking to the mailbox.

To put it in more serious language, one is never required to deny objective reality in order to remain a faithful Catholic; indeed, the exact opposite is true, and don’t let anyone tell you otherwise, no matter how impressive their academic qualifications may be.