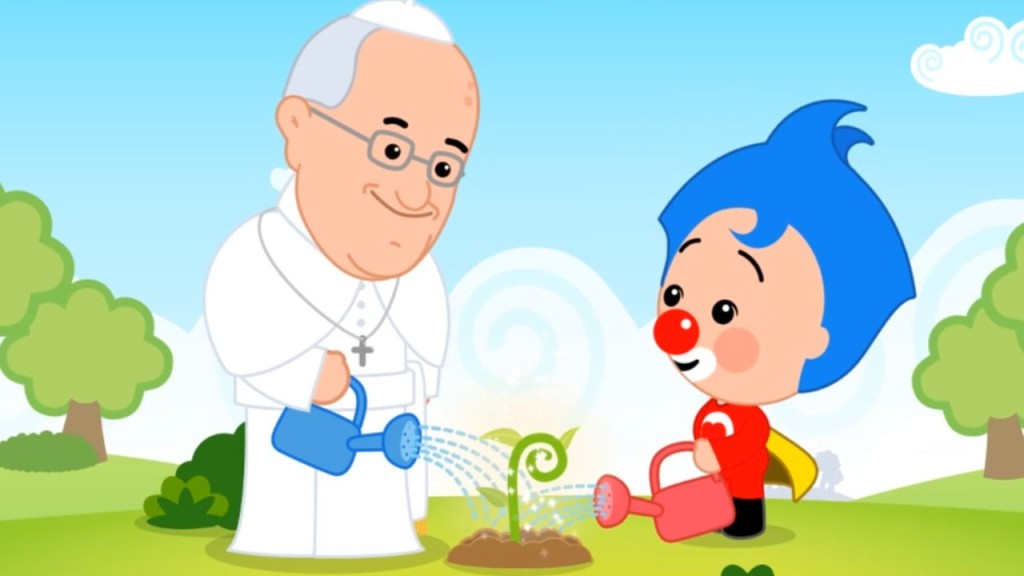 Held at the UN Environment Program (UNEP) headquarters in Nairobi, the conference was co-organized by the Unholy See along with the United Nations and the World Wildlife Fund (WWF); enemies of Christ the King each.

Addressing the gathering on behalf of Modernist Rome was Fr. Bruno Duffe, Secretary of the Dicastery, who said:

The world needs more of your prophetic witness to denounce the inter-generational injustice that is underway and demonstrate that change is possible.

Given the title under which the conference convened it should immediately be clear that Fr. Duffe is referring to what His Greenness calls environmental injustice, and the change that he is keen to encourage concerns a conversion in light of mankind’s “sins against creation.” (Ladato Si’ 8)

We come to realize that a healthy relationship with creation is one dimension of overall personal conversion, which entails the recognition of our errors, sins, faults and failures, and leads to heartfelt repentance and desire to change. The Australian bishops spoke of the importance of such conversion for achieving reconciliation with creation. (LS 218)

If nothing else, we must admire the forthrightness of these apostates; men whose false religion conceives of justice in terms of granting what they imagine to be due not to the Creator, but to mere creation. Indeed, it is no exaggeration to say that they have replaced the Creator with an idol of their own making; most notably man himself, of course, but in the present context, “Mother Earth.”

We have forgotten that we ourselves are dust of the earth (cf. Gen 2:7); our very bodies are made up of her elements, we breathe her air and we receive life and refreshment from her waters.(LS 2)

Let not the biblical citation fool you! Pay close attention to what Sacred Scripture actually says and it will be clear that the statement above is truly nothing less evil than a deliberate twisting of God’s word; an act of deception worthy of the serpent himself.

And the Lord God formed man of the slime of the earth: and breathed into his face the breath of life, and man became a living soul. (Gen 2:7)

It is by virtue of having replaced the Creator, however, that Bergoglio preaches a reconciliation with creation in light of our errors, sins, faults and failures (cf LS 218), which he characterizes as “paying the extremely high costs of environmental deterioration” (cf LS 36).

In Catholic parlance, this so-called reconciliation effort would be called an act of reparation, and it would be directed toward God as the first demand of true justice:

For if the first and foremost thing in Consecration to the Sacred Heart is this, that the creature’s love should be given in return for the love of the Creator, another thing follows from this at once, namely that to the same uncreated Love, if so be it has been neglected by forgetfulness or violated by offense, some sort of compensation must be rendered for the injury, and this debt is commonly called by the name of reparation …

We are holden to the duty of reparation and expiation by a certain more valid title of justice and of love, of justice indeed, in order that the offense offered to God by our sins may be expiated and that the violated order may be repaired by penance: and of love too so that we may suffer together with Christ suffering and “filled with reproaches” (Lam. iii, 30), and for all our poverty may offer Him some little solace (cf Pope Pius XI, Miserentissimus Redemptor, “On Reparation to the Sacred Heart,” Art. 6-7)

Without any doubt, the offenses that are heaped upon God in our day eclipse those of any other period in the Church’s history. Consider:

We have an alleged “Vicar of Christ” who has promulgated a text to the Universal Church proposing that the Divine Law is too difficult for some persons to keep and that God Himself wills adultery. This same claimant to the Chair of St. Peter has declared that man – not Christ, but man – is “King of the Universe!”

Ours is the age of the clerical “gay mafia,” the age of fake canonizations designed to lend the veneer of Catholicity to the enemies of Our Lord and, worst of all, ours is the age of that mockery of the Holy Sacrifice of the Mass known as the Novus Ordo Missae.

Now, how great is the necessity of this expiation or reparation, more especially in this our age, will be manifest to every one who, as we said at the outset, will examine the world, “seated in wickedness” (1 John v, 19), with his eyes and with his mind. For from all sides the cry of the peoples who are mourning comes up to us, and their princes or rulers have indeed stood up and met together in one against the Lord and against His Church. (ibid.)

The Holy Father also, however, offered the following reassurance:

And indeed that saying of the Apostle: “Where sin abounded, grace did more abound” (Romans v, 20) may be used in a manner to describe this present age; for while the wickedness of men has been greatly increased, at the same time, by the inspiration of the Holy Ghost, a marvelous increase has been made in the number of the faithful of both sexes who with eager mind endeavor to make satisfaction for the many injuries offered to the Divine Heart, nay more they do not hesitate to offer themselves to Christ as victims.

Some nine decades ago, these words understandably offered great hope to the faithful. Today, however, we must admit that no such “marvelous increase” is to be observed; indeed, the exact opposite is true!

Sure, there appears to be a growing interest in the Traditional Roman Rite, and traditional orders seem to be the only ones that are flourishing. At the same time, one cannot deny that the injuries being heaped upon the Divine Heart – most notably by the hierarchs of Modernist Rome; men widely accepted by the masses as true “sons of Holy Mother Church” – are multiplying exponentially faster.

And thus, even against our will, the thought rises in the mind that now those days draw near of which Our Lord prophesied: “And because iniquity hath abounded, the charity of many shall grow cold” (Matth. xxiv, 12).

There can be little doubt that the days of widespread charity-grown-frigid are well and truly upon us. This realization should not rob us of our hope; rather, it should move us all the more to offer reparation, cognizant of the late hour in which we dwell.

We will have more to say about reparation in future posts. For now, let us make our own this excerpt taken from the Prayer of Reparation composed by the Holy Father, Pius XI:

And now, to make amends for the outrage offered to the Divine honor, we offer to Thee the same satisfaction which Thou didst once offer to Thy Father on the Cross and which Thou dost continually renew on our altars, we offer this conjoined with the expiations of the Virgin Mother and of all the Saints, and of all pious Christians, promising from our heart that so far as in us lies, with the help of Thy grace, we will make amends for our own past sins, and for the sins of others, and for the neglect of Thy boundless love, by firm faith, by a pure way of life, and by a perfect observance of the Gospel law, especially that of charity; we will also strive with all our strength to prevent injuries being offered to Thee, and gather as many as we can to become Thy followers. (ibid.)