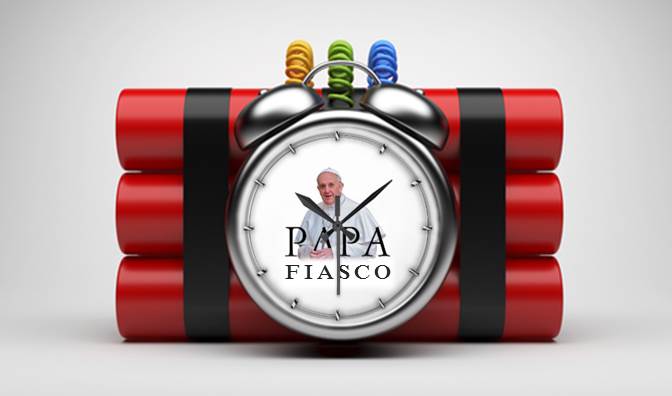 One week from today, the long-awaited post-synod exhortation on the family will finally be released.

All indications are that it will be painfully long (my guess is that it will probably be in excess of 25,000 words). As such, reading it will be my Friday penance next week.

Now, even though we will know its contents for certain soon enough, below is a list of the kinds of things I expect to find in the document based on all that has been said and done thus far.

Add your own expectations in the comments section. I think it will be interesting to see how many of the key points we’re able to come up with.

– No doubt there will be some alarmist language exaggerating the nature and scope of the present “pastoral problem.” You know, like reference to the throngs of LGBT “parents” banging on church doors just begging for Baptism for their unfortunate children.

– It will likely include phrases like “failed marriages” and “second unions” that subtly yet effectively undermine Catholic doctrine concerning the indissolubility of marriage and the sinfulness of sexual relations outside of marriage.

– Francis will use the occasion to once again take shots at his favorite scapegoats – those rascally “traditionalists” (aka Catholics) who wish to make of the Church a “fortress.”

– There will be calls for greater synodality going forward, and Francis will likely revise history by pointing to the recent Synod on the family as evidence for just how well the process works, and this in spite of the fact that the document will subvert the will of the majority of bishops.

– I expect Francis to encourage National Bishops’ Conferences to study these “pastoral needs” more deeply with an eye toward establishing their own norms. He will cite cultural differences between various peoples as the reason this is necessary. The Germans in particular will be pleased to ride this horse as far as it will take them.

– Francis will cite the crucial role played by the sensus fidei (such as he “understands” it) in this matter; claiming that the “God of Surprises” (aka Jorge Bergoglio) is leading the Church via the cries of the sheep. (It’s strictly coincidental that this just happens to be in precisely the same direction he and his favorite profound and serene theologian happen to favor.)

– There will be numerous pleas “for the children” with respect to “second union” and gay parent families, but the document will fail to adequately address the tremendous damage that is done to children by divorce itself; much less will it decry the horrendous damage inflicted upon children who are exposed to homo-deviance.

– It will likewise fail to mention the necessity of perseverance in marriage (i.e, avoiding divorce in the first place), much less do I expect it to mention the first ends of marriage; the procreation and education of children.

– Given that Francis has expressed his admiration for Orthodox theology in the past, I wouldn’t be surprised to find some positive reference to their treatment of “second marriages,” albeit stopping short of plainly endorsing it.

– There can be little doubt that Francis will misappropriate Sacred Scripture, twisting it in Protestant fashion to say whatever he wants it to say. (Hey, don’t blame him; he’s just following the Council’s lead.)

– He will likewise twist the words of previous popes; in particular, John Paul the Great Ecumenist as found in Familiaris Consortio with regard to “gradualism.”

– Integration, integration and more integration… The document will include numerous and varied calls for greater “integration” into the parish of those in irregular (read, objectively sinful) family situations. “Integration” will no doubt be one of the document’s key buzzwords.

– This “integration” will include encouraging participation in Francis’ pet causes by name; e.g., environmental projects, earthbound service to the poor, care for the lonely elderly and unemployed youth.

– Liturgical roles will be among those encouraged in this proposed “integration” process. (Don’t forget, modernists see the liturgy as a tool for indoctrination, and I don’t mean Catholic doctrine!)

– There may even be a call for parishes and dioceses to create “integration committees” or something along those lines for ensuring that our parishes are sufficiently “welcoming.”

– Expect a call for the use of more “pastoral” language with respect to sexual deviants (gays); e.g., eliminating reference to words like disordered, evil, unnatural, etc.

– A “process of discernment” between the pastor and the individual (divorced and remarried, gay) will be proposed with the goal being a return to the Sacraments, even if only implicitly stated as such.

– Confession will be treated in the document, but with a call (again, perhaps only implicit) for pastors to refrain from insisting upon a firm purpose of amendment on the part of penitents. After all, they must be duly applauded just for getting in the box.

– Mercy, mercy, mercy… There will be multiple calls for “mercy” (yet another of the document’s key buzzwords) and precious few pleas for justice.

– Ecumenical concerns will almost certainly creep into the text; though I don’t expect encouragement for non-Catholics to receive Communion similar to the infamous advice Francis gave to the Lutheran woman. In any case, look for ecumenism to get its due just the same. After all, this entire project on the Catholic family (in my view) is but a stepping stone toward the ultimate goal; namely, making of Catholicism a Masonic-inspired religion wherein all faiths supposedly journey together in “making the world a better place.”

– The end result? Not only will the cattle call to Holy Communion that already exists get worse, those pastors who are inclined to uphold their duty to safeguard the Blessed Sacrament, as well as to protect the souls of those who would heap condemnation upon themselves by receiving unworthily (recall what St. Paul wrote in 1 Cor 11:30 about this being the cause of illness and even death!) will be undermined entirely. Those pastors who dare to withhold Communion in cases where they should will be persecuted all the more.

OK,that’s enough from me. What say you, my friends?

Death Penalty Debacle: Our Lady of Fatima called it