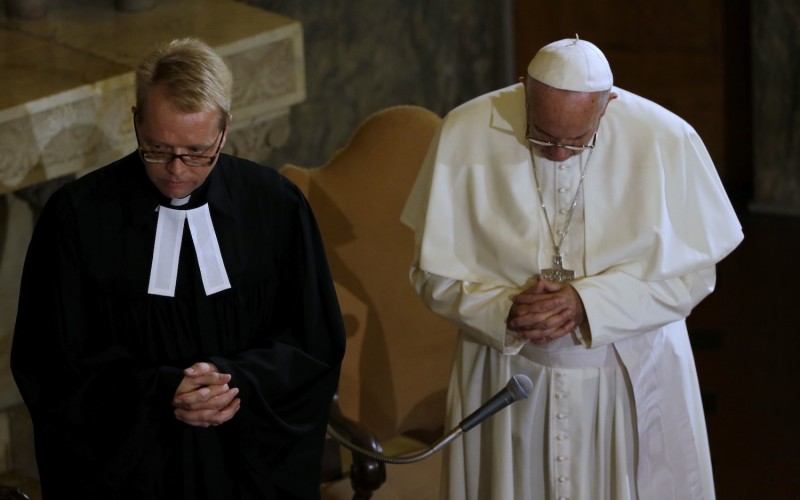 On Sunday November 15, 2015, Pope Francis took part in a prayer service at the Evangelical Lutheran Church in Rome. (The text linked above is in Italian. I translated it as well as I’m able. If anyone wishes to improve upon the quotes offered below, please feel free.)

The event included a Q&A session wherein people from the community were given the opportunity to present a question to their esteemed guest. The first was a nine year boy, and his question was rather simple, “What do you like best about being Pope?”

Pope Francis initially responded by voicing his distaste for protocol and “office work.” He went on to say, “I like being a pastor; I like being Pope in the style of the pastor.”

As for what constitutes the work of the pastor, Francis summed it up in one word: “Service.”

OK, so far so good, but then he expounded upon what he likes about being a pastor:

I like it, in the sense that I feel good when I visit the sick, when I talk to people who are a bit desperate, sad.

Francis likes being pope because it enables him to do good deeds, and doing good deeds, well… that makes him feel pretty darn good!

With this in mind, I have a question of my own:

How does this differ in any way from that which motivates the Lord’s enemies, who also feel all warm and fuzzy inside when they engage in so-called random acts of kindness?

No need to answer. Every person over the age of reason knows the answer; it is no different.

No surprise here. After all, as he plainly admits, Pope Francis is motivated by the same earthbound humanism that inspires the Freemasons; namely, to make this world a better place as such is understood in a strictly temporal sense.

Francis went on to make a little joke with respect to one of his own favored random acts of kindness, saying, “I love going to prison so much, but don’t take me to jail!”

After the laughter subsided, he explained that when he visits the imprisoned, he wonders, “Why them and not me?”

I mean, think about it… Is there even the slightest chance that any one of the people sitting in prison this very day throughout the entire world has done more damage to other human beings than Pope Francis?

In any case, he went on to tell the little boy:

And there [in prison] I feel the salvation of Jesus Christ and the love of Jesus Christ for me; because He saved me. I am no less a sinner than them, but the Lord took me by the hand. This I also feel.

Sounds almost Catholic, I know, but before you give Jorge a gold star, know that he summed up his would-be works of mercy thus: “And when I go to jail, I’m happy.”

Yes, folks, it’s all about him.

In concluding his response, Francis may haven taken a swipe at Benedict the Abdicator:

Being the Pope, being the bishop, is acting as the parish priest, a shepherd. If a Pope is not bishop, if a Pope is not pastor, not a shepherd, he [may be] very intelligent, very important, will have much influence in society, but I think that in his heart he is not happy.

The bottom line: What’s the point of being pope if you’re not happy?

If you think that was pathetic, just wait until you hear what he had to say when Lutheran number two stepped up to the microphone; a woman who introduced herself as the wife of a Roman Catholic.

She told Francis that she and her husband “regret being divided in faith and not being able to participate together in the Lord’s Supper.”

Her question was also very simple: “What can we do to achieve, finally, communion on this point?”

In truth, the woman’s question was infinitely simpler and easier to answer than the one put forth by the nine year old boy.

Even so, Pope Francis struggled mightily with his response.

He did, however, find it appropriate to make another joke, this time in reference to a certain German cardinal sitting in the front row:

When asked about sharing in the Lord’s Supper, it is not easy for me to answer you, especially in front of a theologian like Cardinal Kasper! I’m scared!

How humble can one Bishop of Rome be?!

I’ll tell you how “humble” he cab be: humble enough to admit: “I do not know how to answer … I leave the question to the theologians, to those who understand.”

I have a better idea…

How about leaving it to just about any twelve year old Confirmation candidate who is being formed in the faith by the Society of St. Pius X?

I can pretty much guarantee that any one of these children would be able to give not just an answer, but the solitary correct answer (aka the Catholic answer) right away:

Dear Lady, you must renounce your protestant errors and convert to the one true faith. It is only upon entering into, and persisting in, the Holy Catholic Church that anyone enjoys the unity and authentic communion you are seeking.

Francis, however, does not have sensus Catholicus,  and so the answer evaded him.

Watch him wrestle with his response in the video below (from approximately the 21:00 – 31:00 mark). Even to those who do not speak Italian, it is clear that the man is genuinely struggling!

To be clear, it’s not so much the case that he does not know what the Church has to say on this matter; rather, he does not accept what she has to say!

As such, he counseled the poor woman to think of “sharing in the Lord’s Supper,” not in concrete terms, but in terms of accompaniment:

When we share the Lord’s Supper, we remember and imitate, we do the same thing that the Lord Jesus did. And the Lord’s Supper will be, the final banquet in the New Jerusalem, but this will be the last. Instead, the way, I ask myself – and I do not know how to answer, but I make your question my own – I ask: to share the Lord’s Supper, is this the end of a journey, or is it the encouragement to walk together? I leave the question to the theologians, to those who understand…

Don’t be fooled by the false humility. What Francis is essentially saying is this:

I have an answer for you; one not at all like the answer that is found in the Faith that comes to us from the Apostles such as it has been transmitted throughout the centuries. I will leave it to brilliant theologians like Walter Kasper to figure out how to come up with a way to reconcile these two disparate propositions in such a way as to make my response seem Catholic. Until then…

Francis went on to expound upon his response, urging the heretic lady to imagine a make-believe degree of unity that simply does not exist:

No, clearly we do not have the same doctrine, and no, the word “doctrine” is not difficult to understand; it is simply the case that some doctrines are difficult for the heretics to accept, and I dare say that this was evident yesterday in both the Lutheran woman and the Bishop in white.

Francis went on to underscore the ludicrous idea that our doctrines are essentially the same, saying:

When you teach your children about Jesus, why Jesus came, what Jesus did, you [and your husband] both do the same, in Lutheran language and in Catholic language, but it is the same.

As if he hadn’t repudiated the Catholic faith quite enough, Francis then decided to pull the rug out from under Sacramental Confession, saying:

When you feel sinful … you go before the Lord and ask for forgiveness. Your husband does the same and goes to the priest and asks for absolution; remedies to sustain the Baptism.

He just counseled this woman, publicly, to believe that the Sacrament of Confession is the same as going off on one’s own to seek forgiveness “directly from God.” In so doing, he just told Catholics the world over that there’s really no reason to enter the confessional!

Oh, and he also tipped his hand regarding the upcoming post-Synodal Apostolic Exhortation.

Look, if it suffices for heretics to seek forgiveness outside of the confessional, what is to prevent a public adulterer or active homosexual from privately uttering words of pseudo-contrition on the way up to the Communion rail every Sunday?

Truly, my friends, after more than two-and-a-half years, we have witnessed precious little evidence that this man, Jorge Mario Bergoglio, actually holds the Catholic faith, objectively speaking. By contrast, we’ve endured an overwhelming amount of evidence to the contrary.

Does anyone among the College of Cardinals have the stones to publicly challenge this man and his material heresy?

In any case, after briefly mentioning (not by name) his deceased “brother bishop,” Tony Palmer, and his own family conundrum with respect to Holy Communion, Francis, in so many words, gave her (and protestants everywhere) the green light to decide the question of intercommunion for herself.

Life is bigger than explanations and interpretations. Always refer to Baptism: “One faith, one baptism, one Lord”, so Paul tells us, and from there you take the consequences.

He’s essentially telling her, Look, you and your husband are already of one faith in the one Lord by virtue of Baptism.

So what exactly did he intend to convey to the questioner?

The bottom line can be but just one of two things; either he means to say that she should not place any importance on the matter of Holy Communion, or he is telling her that both she and her husband are free to communicate in one each others churches.

What he most certainly had no intention of conveying is any suggestion that the Lutheran would do well to renounce her heresies and come to the true faith. Of this, there can be no question.

In other words, Pope Francis had no Catholic answer.

He concluded his response:

To your question, I respond only with a question: how can I act with my husband, so that the Lord’s Supper accompanies me on my way? It’s a problem that everyone must answer … I do not dare ever grant permission to do this [answer this question one way or the other] because it is not my competence. One baptism, one Lord, one faith. Talk to the Lord and go forward. I dare not say more.

If you watch the video and listen to his intonation here, it is evident that Francis does not mean to imply that he dare not reveal his true thoughts. He has revealed them plainly enough.

He is saying that he does not have the authority to tell this woman how to address the problem that she presented to him. Rather, she simply needs to ask the Lord.

And who knows, He may just tell her to join her husband in receiving Communion at Holy Mass?

After all, He is the God of Surprises.