An op-ed by Ross Douthat published in the September 5th edition of the N.Y. Times, The Pope’s Marriage Endgame, is getting a good bit of attention.

In it, Douthat suggests that Pope Francis “wanted a big internal argument over marriage and communion, [and] that he deliberately started this civil war;” the same that will come to a head at the upcoming Synod in October.

As for how the conflict between the Kasperians and the defenders of tradition might end, Douthat says that “annulment reform,” such as the recent changes made to the process by Pope Francis motu proprio, “has long been seen as a possible compromise between the two sides of this Catholic civil war.”

As such, he states:

Perhaps, as the veteran Vaticanista John Allen suggests, he wants to dial down the synod’s temperature, avoid more pitched battles over Kasper’s proposal, and create “space for other issues to emerge.” This seems plausible, especially since the new rules address many of the cases that presumably made the Kasper proposal appealing in the first place

There’s no telling exactly what “other issues” either man has in mind, but the possibilities are outlined in the Lineamenta (or guidelines) for the Synod that were published toward the end of 2014.

In addition to the hot button issues concerning the so-called “pastoral care” of the civilly divorced and remarried, cohabitating couples and homosexuals, the list of issues up for discussion includes such pressing matters as:

The overwhelming majority of the items on this list of “issues” represent nothing more than yet another opportunity for bishopcrats to spin new verses of pseudosacral homopoetic prose relative to matters that have long since been settled in the Church while fooling themselves (and perhaps, God forbid, others) into believing that they’re actually engaging in some meaningful evangelical activity.

Consider, for example, this utterly meaningless gem found in the interim relatio that came out of last year’s Extraordinary Synod:

The Gospel of the family, while it shines in the witness of many families who live coherently their fidelity to the sacrament, with their mature fruits of authentic daily sanctity must also nurture those seeds that are yet to mature, and must care for those trees that have dried up and wish not to be neglected.

If the Synod fathers are truly interested in examining dried up trees, they need look no further than their confrere, Cardinal Donald Wuerl:

In any case, let’s be honest, there are precious few “other issues” of import for the Synod to take up apart from those that are near and dear to the hearts of the revolutionaries; Pope Francis and his faithful sidekick Walter chief among them.

Far from “creating space” for other matters to come to the fore, by issuing his motu proprio revising the annulment process in advance of the Synod, Pope Francis has effectively established as the “new normal” what some considered to be a potential via media between the extremes.

In other words, I suggested last year that one might see the Hegelian Dialectic in action:

Kasper, in his proposed “reforms” has provided the thesis, Cardinal Burke, in his defense of tradition as upheld by the status quo has provided the antithesis, and all that remains is for the Synod to deliver the synthesis.

As things stand today, however, the antithesis has been bullied (to employ the vernacular of the current culture) to the left; i.e., Francis has forced the status quo party to accept unilateral concessions even before the “negotiating” has begun.

As such, I would expect that whatever room was created on the Synod agenda by preemptively granting an easier row to hoe for those seeking a decree of nullity (as I argued in a previous post), will more likely be filled with efforts to establish a consensus for new “pastoral approaches,” not just with respect to the civilly divorced and remarried, but for all of those “devout” homosexuals who are just clamoring for the Sacraments for themselves and their unfortunate children.

Ross Douthat, for his part, seems largely to foresee as much as well, saying:

From the liberal perspective, the new annulment rules may simply move the goal posts farther in their direction, setting up a future settlement that’s even more favorable to their ambitions.

I would agree; provided, however, that we are clear in understanding that the future is now.

If nothing else, the revolutionaries are clever; they know very well that their Generalissimo is no spring chicken. Surely they are far too wily to simply assume that the window of opportunity that lies before them today will remain as wide open as it is should the current pontificate meet with an untimely end.

They will, no doubt, carpe diem.

All of this said, apart from providing a noteworthy stage for various churchmen to make a name for themselves – some in service to the good, others for evil – one is hard pressed to avoid seeing the Synod itself as a non-event.

In fact, I’d say that we have more reason than not to believe that the outcome has already been determined, and guess what?

It will be precisely what the “God of Surprises,” aka Jorge Bergoglio, wants it to be. 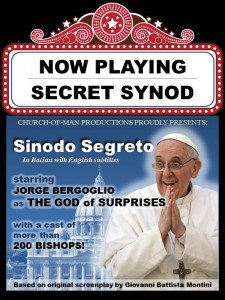 As evidenced by his decision to disseminate and publish that shameful interim relatio from last year’s Extraordinary Synod, without the body of bishops’ foreknowledge, His Humbleness has made it plain as day that he has every intention of getting whatever he wants no matter how the Synod proceedings shake out.

His insistence that the final relatio for the Extraordinary Synod contain even those Kasperian paragraphs that didn’t receive the required two-thirds majority of votes only further verifies as much.

The motu proprio reforming the annulment process, which was reportedly issued without any prior input from senior Vatican officials and dicasteries, including the Congregation for the Doctrine of the Faith, only serves to confirm further still that this pope is fully prepared to act unilaterally in enforcing his will, even as he waxes on disingenuously about the importance of synodality.

As for the rules changes concerning the upcoming Synod proceedings (mentioned here), these are mainly but an effort to manage appearances and likewise expectations and the way in which the predetermined outcome will be received.

To a certain extent, the publication of the motu proprio serves the same purpose by affording the faithful some time to grow accustomed to a new, bishop-centered, “pastoral” initiative before even more of them are unveiled.

(I predicted some time ago that the likely result of the Synod will be some hollow re-affirmation of doctrine that simultaneously allows the National Bishops’ Conferences and local bishops to enact “pastoral applications” that effectively undermine it.)

In the end, however, the outcome of the Synod will be whatever Francis wants it to be.

On this note, Ross Douthat appears to be among those who still aren’t quite sure exactly what that is, saying:

The question that remains unanswered, though, is how the pope intends to finish it [the civil war that he deliberately invited].

While the full picture may as yet be a bit murky, what Francis intends is for the Universal Church to adopt as its own a “pastoral approach” that reflects the “profound and serene” theology of Walter Kasper.

The real point of intrigue with this Synod, as I see it, has to do with the fallout that will take place once the “God of Surprises” pronounces his will.