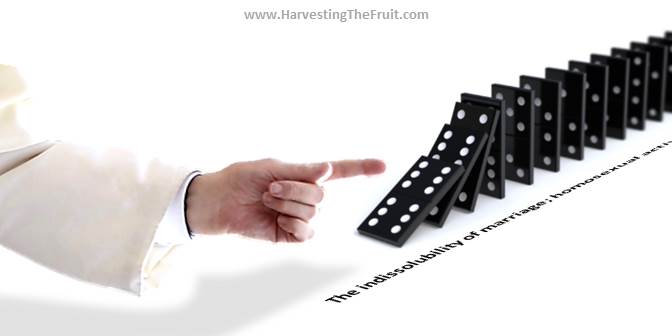 In response to the changes recently made to the annulment process by Pope Francis, I would suggest that we examine the matter a bit more closely and then take a wait and see approach before drawing any conclusions.

The motu proprio reforming the Code of Canon Law (for the Latin Church), Mitis Iudex Dominus Iesus, is available on the Holy See website in Latin and Italian, Vatican News Service, however, provided an English translation wherein the following seven changes are set forth.

Now, bearing in mind that I do not possess a J.C.D. (Juris Canonici Doctorate) but rather only an S.C. (Sensus Catholicus), let’s walk through these items together one at a time:

EXAMINE: No longer will an initial judgment of nullity have to be submitted to a “court of second instance” for review and either confirmation or denial; rather, the initial ruling will suffice.

WAIT: Don’t be lulled to sleep  by data suggesting that the court of second instance has historically upheld the first ruling in the overwhelming majority of cases. The mere existence of the secondary procedure arguably served to keep sloppiness (and any tendency toward liberal activism) somewhat in check.

SEE: With this built-in system of “checks and balances” thus removed, the chances of an improper judgment becoming final has undoubtedly increased.

EXAMINE: Juridical power will be concentrated in this single judge in an unprecedented way thanks to item 1 above.

WAIT: One can safely assume that this judge will be of like mind with the bishop who appointed him. This is obvious enough, but since we’re now looking at a “single judge,” it is far easier for a given bishop to effectively dictate the mindset and direction of the tribunal.

SEE: Men like Cardinal Reinhard Marx of the Archdiocese of Munich and Freising, who has made no bones about his intent with respect to opening pathways to Communion for the civilly divorced and remarried, will appoint a judge who will rule accordingly; i.e., he isn’t about to appoint a man who thinks like Cardinal Burke.

EXAMINE: Any bishop that would have otherwise felt the need to constrain the desire to run roughshod over the tribunal’s decision making process, now has a papal mandate to do exactly that.

WAIT: In some dioceses, the notion of “especially” and “most evident” will eventually come to naught, and the matter of obtaining an annulment will revolve around one’s local bishop. In short, what is now a juridical procedure will quickly devolve into an administrative process.

SEE: We can well expect disparity to exist from diocese to diocese, as one bishop’s “laxity” is another bishop’s “mercy.” In other words, getting married and remaining in a “conservative” diocese might just be for life, whereas doing so in an uber-liberal one might be tantamount to entering into a prenuptial agreement wherein the parties are all but guaranteed the ability to retain the unmarried state should things get dicey.

EXAMINE: The “documentary process” refers to cases that are black and white; e.g., a previous “marriage” that was conducted by a Justice of the Peace and is therefore null due to lack of form as evidenced by the documents alone. The Holy Father has introduced a new concept; nullity “by particularly clear arguments.”

WAIT: One does well to recall that a majority of the bishops at the Extraordinary Synod of 2014 voted in favor of an article (found in the final relatio) that suggests “a more individualized approach, permitting access in certain situations and with certain well-defined conditions, primarily in irreversible situations and those involving moral obligations towards children who would have to endure unjust suffering. Access to the sacraments might take place if preceded by a penitential practice, determined by the diocesan bishop.”

SEE: It is evidently “particularly clear” to many bishops that the indissolubility of marriage constitutes a sentence of “unjust suffering” upon those who enter into it. These men have been handed justification, by the pope no less, for applying that same heterodox reasoning to the process of granting annulments. In so doing, they can lay claim to upholding the traditional doctrine (which makes the attainment of an annulment necessary), while undermining it entirely.

WAIT: Decisions rendered, for example, in the Diocese of Peoria under Bishop Jenky (a so-called “conservative”), would be subject to being overturned by the Metropolitan See of the Archdiocese of Chicago under Archbishop Blaise Cupich.

SEE: As Pope Francis appoints more of his own, like Blaise Cupich, to other Metropolitan Sees, the direction in which judgments of nullity will go isn’t exactly a mystery.

EXAMINE: The word “retribution” above (retribuzione in Italian) is better translated remuneration, or the payment of wages.

WAIT: No one can deny that individual bishops already feel compelled, at least in some measure, to adopt the “group think” of that bureaucratic machine known as their National Episcopal Conference. Here in the United States, and presumably in most other nations as well, this pressure invariably moves ordinaries in a leftward direction.

SEE: This same liberalizing pressure will now come to bear on the annulment process, if for no other reason than one does not do well to bite the hand that feeds them.

EXAMINE: The buck stops in Rome, but once again, one notes that this is a one-way appeal in obtaining a judgment in favor of nullity.

WAIT: The mindset of Rome with respect to the matter at hand is obvious enough from the moto proprio presently under discussion. Even so, more clarity still can be gleaned from the words of Cardinal Francesco Coccopalmerio, President of the Pontifical Council for Legislative Texts, the body charged with the task of interpreting the law of the Church.

Speaking to America Magazine last October at the conclusion of the Extraordinary Synod, Cardinal Coccopalmerio said:

Allowing what many synod fathers described as ‘an administrative procedure,’ by which the local bishop can declare the annulment of a marriage ‘for grave and urgent reasons.’ This could happen even in the absence of external evidence or witnesses, when the bishop considers the couple themselves as ‘credible witnesses’ to what was the actual situation in their marriage.

I am very favorable to this third solution; it is often the only way forward … We must adopt the hermeneutics of the pope; we must adapt the procedure to the concrete situation of individuals for grave and urgent reasons.

SEE: In time it will become obvious that the motu proprio has put in place all that is needed to make this “solution” a reality.

CONCLUSION: The timing of the motu proprio’s release was well-calculated in advance.

By publishing the Letter nearly one month before the Synod of Bishops convenes, the Kasperians have been further emboldened to press forward without fear; with their adversaries put on notice that this pope intends to get what he wants, no doubt the full court press to recruit votes in favor of “pastoral practices” that will cause doctrines to fall like dominoes has shifted into overdrive.

In short, this motu proprio represents the formal beginning of that process whereby the indissolubility of marriage will be undermined in a way that allows the “reformers” to claim adherence to tradition, even as they set in motion its undoing.

Please consider supporting our efforts in defense of Catholic tradition. Your generosity will be greatly appreciated!

Your Latin Mass parish is growing. So what?