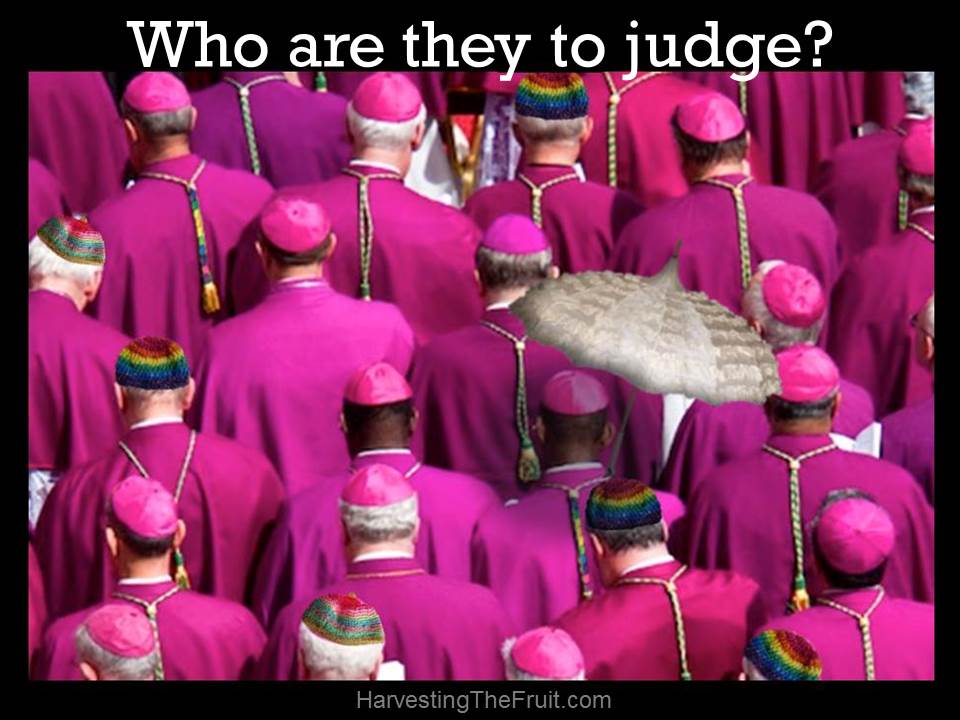 In addition to the outright abominations put forth in the Synod’s already infamous Midterm Report, there are numerous flowery, and ultimately meaningless, musings such as the following:

The Gospel of the family, while it shines in the witness of many families who live coherently their fidelity to the sacrament, with their mature fruits of authentic daily sanctity must also nurture those seeds that are yet to mature, and must care for those trees that have dried up and wish not to be neglected.

The only way I can think to classify this particular style of writing, knowing that it emanated from an all-male committee of clerics, is to say that it is nothing more than pseudosacral homopoetic prose; an especially annoying symptom of the undeniable feminization of the Church Militant that began at Vatican II.

The bishops who authored this sewage are precisely the product of that roguish council wherein it was deemed expedient for churchmen to focus, not on combating the errors that threaten the citizens of this fallen world redeemed and ruled by Christ the King who reigns victorious over all things, but on entering into consultative dialogue with every miscreant that inhabits the fairytale land they invented wherein “all things should be related to man as its center and crown.” (cf Gaudium et Spes)

Is it any wonder this same body of eunuchs has produced in the place of sacred Magisterium what is perhaps more properly understood as putrid Pornisterium such as:

Homosexuals have gifts and qualities to offer to the Christian community …  Are our communities capable of … accepting and valuing their sexual orientation, without compromising Catholic doctrine on the family and matrimony? … Without denying the moral problems connected to homosexual unions it has to be noted that there are cases in which mutual aid to the point of sacrifice constitutes a precious support in the life of the partners.

Exactly what kinds of “gifts” and “qualities” are properly recognized as belonging specifically to homosexuals as opposed to any other person?

How is this ludicrous statement any different than saying, “Adults who are sexually attracted to small children have gifts and qualities to offer to the Christian community … Are our communities capable of accepting and valuing their sexual desires?”

And why in God’s name “must” it be noted that homosexuals lend “precious support” to their gay den mates? Says who?

Ramblings such as these are so utterly devoid of even the appearance of truth that they merit comment mainly just for the sheer sport of it. Play ball!

Look, the wheels didn’t come off the cart on Monday; they’ve been off for five decades. The Synod is simply doing exactly what I had hoped it would do; namely, it is howling like a wolf, and in so doing hopefully helping the ignorant and the stubborn alike come to terms with the reality of the crisis at hand.

This longed-for awakening of the masses isn’t going to happen overnight, but fast approaching is the day of reckoning wherein each and every one who calls himself Catholic is going to have to stand up in the face of the Bergoglian revolt and be counted as either with Our Lord, or with Generalissimo Humilde and his cadre of militant modernists.

Cardinal Burke is standing up, and I fully expect him to do so all the more in the weeks and months ahead.

In an interview with Catholic World Report, His Emnence said:

The debate on these questions has been going forward now for almost nine months, especially in the secular media but also through the speeches and interviews of Cardinal Walter Kasper and others who support his position. The faithful and their good shepherds are looking to the Vicar of Christ for the confirmation of the Catholic faith and practice regarding marriage which is the first cell of the life of the Church …In my judgment, such a statement is long overdue.

Pope Francis has already weighed in loudly and clearly on Cardinal Kasper’s “profound and serene theology,” and that, of course, is one of the primary reasons why the Fraternity of Finocchi are so boldly proclaiming their wicked ideas.

As an aside, the clerical enemies of the Church that are driving the current debate have been around for a very long time. They were most certainly crawling on their bellies in the shadows of Rome at the time of Pope St. Pius X, even if not in such number and rank as they exist today.

Who can imagine for even a moment this truly Holy Father sitting silent as the bishops publicly set about calling into question the immutable doctrines of the faith as they are today?

The indisputable fact of the matter is that Pope Francis is not only silently allowing this travesty to unfold, he is actively encouraging it.

One wonders if the so-called “conservative” voices in Catholic media, the same who have a long track record of publicly revering Cardinal Burke even as they refuse to acknowledge the tremendous damage being done to the Church at the hands of Pope Francis, will now be willing to emulate His Eminence in issuing their own public call for a “long overdue” papal statement reaffirming Catholic faith and practice.

Surely that isn’t too much to ask, is it?

You claim to embrace “tradition,” but are you honest?