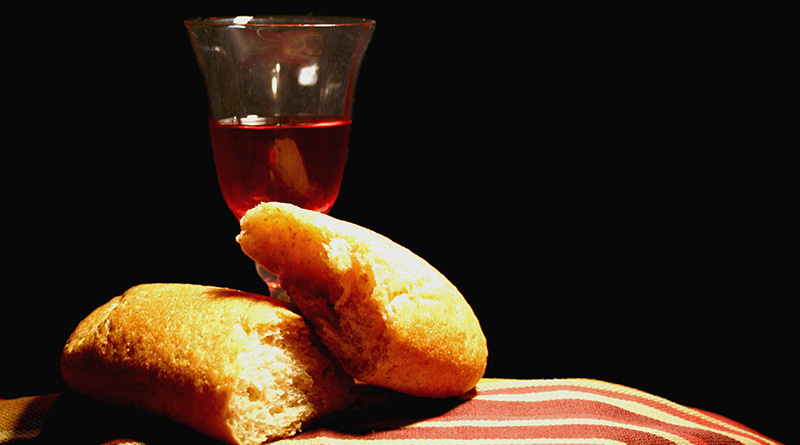 Providence, it seems, is leading us to focus with greater intensity upon a question of critical importance; namely, whether or not the consecration of the Blessed Sacrament is possible outside of Mass.

As readers will certainly recall, the present debate began on these pages when I responded to an article written by Steve Skojec, wherein he maintained that a drunken priest at a bar can validly consecrate bread and wine “if he says the right words with the right intention.”

At this point, it’s safe to say that this proposal is as false as it is repugnant, if for no other reason than the fact that intent, which is required for validity, is a function of the will. As Aquinas teaches:

…an animate instrument, such as a minister, is not only moved, but in a sense moves itself, in so far as by his will he moves his bodily members to act. Consequently, his intention is required… (ST III, Q. 64, A. 8)

I had previously provided the following, which speaks directly to drunkenness on the part of the minister and its corrupting effect on intent:

…[H]e who would administer a sacrament in a drunken, or somnambulistic, or hypnotic state, would perform an action that is null, even though before the occurrence he might have had the most formal intention of doing what the Church does; for in that abnormal state he no longer acts as a rational being capable of being the representative of Christ and the Church. (Very Rev. P. Pourrat, Theology of the Sacraments, pg. 393)

While this particular case is well and truly closed, a video of a 2011 conference given by Bishop Bernard Fellay had surfaced in the process in which he told the following story:

For the record, I believe that Bishop Fellay’s intent was to make a broader point during a lengthy conference. That said, I also believe that his comments were, at the very least, imprudent and very likely incorrect.

In any event, this video now being part of the public debate, the SSPX was moved to weigh-in with an article of their own under the title, Is the Consecration of Bread and Wine Outside of Mass Valid?  We will examine that article here. It begins:

Bishop Fellay … sought to clarify the Church’s teaching on form, matter, and intention with respect to the Eucharist by recalling anecdotes concerning wayward clerics who consecrated an entire bakery and a wine cellar. The Bishop’s point was that threshold for intention is not as high as some Catholics suspect and that even illicit consecrations are still presumed valid.

Unfortunately, Bishop Fellay went quite a bit beyond simply clarifying what constitutes the intention required for validity when he asserted, more than once and with what appears to be absolute certitude, “It’s valid!”

The article goes on:

In response, some murmurers have opined that a minister who attempts to consecrate a bakery or wine cellar outside of Mass can never have the right intention, that is to do what the Church does, because the act is intrinsically sacrilegious. Others have expressed incredulity toward the idea that a priest could validly consecrate such a vast amount of bread and wine, whether or not the consecration was performed in a sacrilegious manner.

Though the crux of the present discussion centers around the former question concerning the Mass, the matter of quantity is a legitimate consideration as well.

Consider: If indeed consecration is valid outside of Mass (i.e., pretty much anywhere if only the words of consecration are spoken along with the intent to consecrate – and silently, at that), then what is to prevent a priest from secretly consecrating all of the bread in a given zip code, or a certain nation, or the entire world for that matter?

You see, when the argument in favor of unrestricted validity is taken to its logical conclusion, its absurdity is plainly revealed. Even so, the unnamed SSPX author continues from on high:

Both of these objections are without merit. Instead of casually speculating about such things on the Internet or leaning on théologie de bistrot, it is far more prudent to look to the Angelic Doctor, St. Thomas Aquinas, who addresses both topics in his Summa Theologiae (ST).

The article then provides a citation from the Summa “On the Quantity of the Sacrament:”

Though Aquinas here mentions “all the bread in the market or all the wine in a cask,” it is clear that he does so only in order to stress that the quantity under consideration may indeed be vast, or more properly, without strict limit.

NB: In addressing the specific question of quantity, however, St. Thomas makes reference no less than three times to “the use of the faithful,” at one point even narrowing his comments to those “who are actually present.” He also speaks of “parishioners,” and twice he mentions “the number of the faithful.”

It is manifestly obvious given these numerous allusions to the faithful that St. Thomas is speaking specifically about consecrations done within the celebration of the Mass. One may even reasonably argue that he simply assumes that it is understood by all that when one speaks of consecration, one necessarily also speaks of Holy Mass.

More to the point, it must be acknowledged that nowhere does St. Thomas even hint that a consecration outside of Mass may be valid; indeed, he doesn’t directly address that question at all, which leads one to wonder why the SSPX writer chose to cite him in the first place.

That said, Aquinas does provide a certain insight into the matter, albeit indirectly.

A thorough reading of his treatment of the Eucharist (ST III, Q. 73-83) plainly reveals that his entire discourse on the subject is written under the presumption that the consecration is taking place within the Mass, and not just anywhere. In fact, Q. 83 specifically addresses “The Rite of this Sacrament,” and guess what, it is the Mass, or in the case of the Eastern Rites, the Divine Liturgy!

Consider as well the following from the 1917 Catholic Encyclopedia, which was granted an imprimatur at a time when such provided a measure of assurance:

In truth, the Eucharist performs at once two functions: that of a sacrament and that of a sacrifice. Though the inseparableness of the two is most clearly seen in the fact that the consecrating sacrificial powers of the priest coincide, and consequently that the sacrament is produced only in and through the Mass…

Get that? The sacrament is produced only in and through the Mass…

This opinion is neither unsafe nor imprudent; much less is it held by just a small ill-informed group of internet warriors, as the SSPX author condescendingly suggests.

Consider, for instance, the eminent pre-conciliar Thomist, Fr. Raphael Walter Farrell, O.P., one of the most celebrated theologians of the past century, whose multi-volume masterwork The Companion to the Summa was published from 1939 to 1941.

In the section wherein Fr. Farrell comments upon St. Thomas’ treatment of the Eucharist, he makes it perfectly plain that he understands Aquinas to be speaking of “consecration in the Mass,” a phrase he repeats numerous times. More importantly, perhaps, is the fact that his commentary also reflects the opinion that the Holy Sacrifice of the Mass and the sacrament are inseparable as he writes:

In instituting the sacrament and sacrifice, Christ said to His apostles: “Do this in commemoration of me.” … They accomplish the sacrament in the consecration of the Mass.

The SSPX article went on to cite St. Thomas with regard to intention (you may read it there), but this too fails to shed any light on the question at hand concerning consecration outside of Mass.

In conclusion, the SSPX author, whomever he may be, fell woefully short in his approach to the question posed in the title to this disappointing article, Is the Consecration of Bread and Wine Outside of Mass Valid?

Rather than exploring the matter with humility, as one in search of the truth wherever it may lead and whatever it may be, he evidently chose to begin with the answer he preferred, only then to proceed by shoe-horning as best he could the Summa Theologiae in such a way as to make it fit.

Now, what was that about bistro theology?

Francis: Not disposed to receive at Mass? Just stay home.

Post-conciliar papacy back on track

You thought evil… God turned it into good