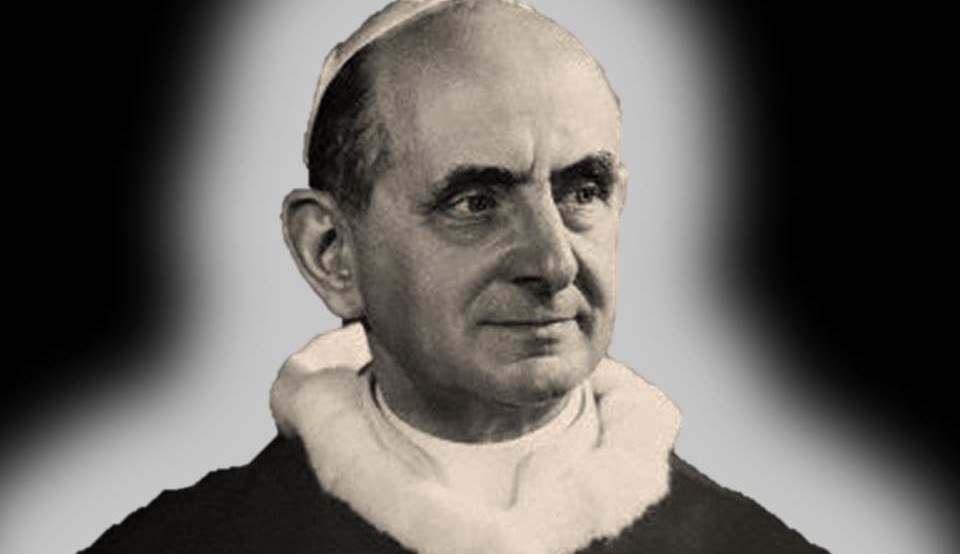 According to several reports, the “canonization” of Giovanni Battista Montini, aka Pope Paul VI, is likely to take place in 2018.

Word has it that it may very well happen in October when the Synod of Bishops is in session to “ask young people to help the Church in identifying the most effective ways to announce the Good News today.” (see Synod Preparatory Document)

If indeed this is when Paul VI receives the Conciliar Lifetime Achievement Award in Service to the Revolution (or what Rome presently calls “canonization”), the timing is at least fitting.

After all, the Synod of Bishops as we know it was established by Paul VI in 1965 via the Apostolic Letter, Apostolica Sollicitudo.

According to this Letter, one of the “general purposes” of the Synod is:

Think it about it…

In 1965, exactly which “essential matters of doctrine” were as yet so incompletely defined as to constitute a legitimate source of disagreement among authentic Catholics?

The answer: Not one.

Even so, the Council, which was just months away from closing, was busily setting the stage for a new religion; the one currently preached in Modernist Rome. The Synod was intended to serve as, and presently is, nothing more than a tool for fooling the naïve into believing that this new religion is Catholic.

The same can be said for certain post-conciliar “canonizations.”

It occurred to me long ago that making of Paul VI a canonized saint was more than likely a part of the modernist masterplan even well before the man died; with the real purpose being to elevate the Novus Ordo Missae above suspicion in the minds of the same aforementioned naïve.

Why, I often used to wonder, was this not done already?

The reason it has taken so long, I believe, is that the Devil, who is guiding these events, is patient. Mere human beings like us tend to think in terms of a lifetime, while the Evil One, by contrast, plots and plans in generational terms.

As such, Satan was simply biding his time until the faithful were sufficiently stripped of their sensus Catholicus to accept the utterly preposterous notion that Paul VI is a saint.

Having tested the waters with the “canonization” of John Paul II, which based on the reaction of the rank and file was a tremendous success, he is apparently rather confident that the time is nigh.

But is it really?

Already there are signs that Francis is slowly opening the eyes of the naïve to the reality of the present crisis. It is my hope – and to an extent, my expectation – that the “canonization” of Paul VI will only accelerate that process.

No one other than Satan himself has done more to promote the “cult of man” over and against the cult of Jesus Christ, and blatantly so, than Paul VI.

[For those who have yet to read it, do yourself a favor and read Paul VI Beatified? by Fr. Luigi Villa, which provides copious quotes attesting to his disastrous, anthropocentric pontificate.]

Many if not most neo-conservatives already understand that the “cult of man” is poison in the Body of Christ.

This is true even of the most intransigent papalaters in Catholic media who refuse to associate the crisis in the Church with any of the claimants to the Chair of St. Peter; either past or present. Likewise is this true of their supporters.

Take, for example, the poster boy of such persons, Michael Voris.

From whom and how did this “cult of man” manage to infiltrate the Church of Christ?

The Second Vatican Council, of course, but only with the help of Paul VI who said at its closing (among many other things):

Do you at least recognize this merit, you modern humanists who have no place for the transcendence of the things supreme, and come to know our new humanism: we also, we more than anyone else, have the cult of man.

This is the same Paul VI who said:

Peace is a most human thing. If we seek wherefrom it really comes, we discover that it sinks its roots in the loyal sense of man. A peace that is not born of the real cult of man, is not essentially a peace.

So much for Jesus Christ, the Prince of Peace.

This Council… in conclusion, will give us a simple, new and solemn teaching to love man in order to love God.

And here you thought it was the other way around!

I could go on all day with quotes from Paul VI calling on man to worship man, but the point has presumably been made.

Paul VI didn’t just kiss a Qur’an once, or hold a couple of ecumenical prayer gatherings at Assisi (as abominable as these actions are, they are excusable as momentary lapses in judgment in the minds of foolish neoconservatives); rather, he ordered his entire pontificate on, and directed the entire Church toward, precisely the “cult of man” that men like Michael Voris and their supporters readily recognize as poison.

What will they do when Rome holds him up as a “saint” – a man of heroic virtue worthy of emulation?

Sure, there is a pretty good chance that some if not all of them will make excuses; perhaps with an eye toward keeping the franchise chugging along.

If so, at the very least I would expect that many of their current supporters will be forced to open their eyes and to reevaluate both their faith and their patronage.

With all of this in mind, the “canonization” of Paul VI cannot happen soon enough.

Which is worse: Arianism or Bergoglianism