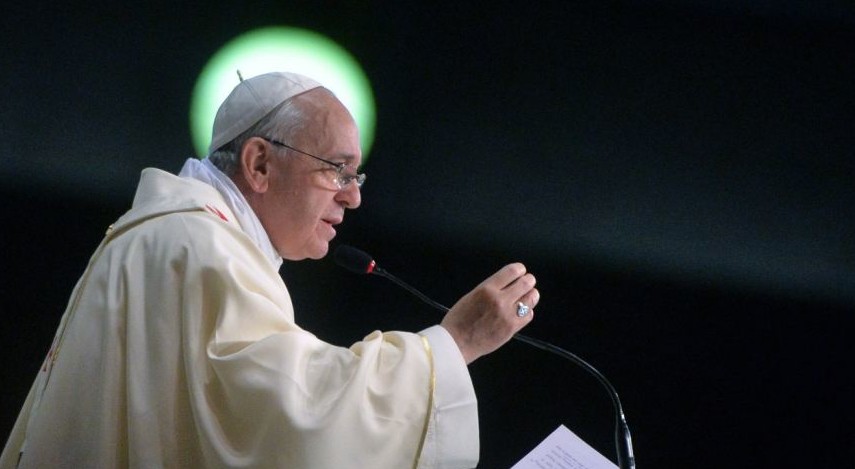 As I wrote last week, the central point of Francis’ Christmas Address to the Roman Curia was nothing less than a stern warning to those who may dare to speak ill of, much less oppose, his agenda; specifically, Big Humble is watching.

Today, I’d like to highlight some other noteworthy portions of the address, starting with Francis’ Christmas wish:

May this Christmas open our eyes so that we can abandon what is superfluous, false, malicious and sham, and to see what is essential, true, good and authentic. My best wishes indeed!

Francis treated those in attendance to a lesson in Bergoglian ecclesiology, saying:

God … establishes the Church to be in the world but not of the world, and to be an instrument of salvation and service.

In this, those who have had their eyes opened cannot fail to see the deceptive hand of the Evil One at work; he whose modus operandi is to commingle the truth (the Church is in the world but not of the world) with a lie (the Church is simply one instrument of salvation among many).

Then there is the notion that the Church is in the “service” business (e.g., earthbound service to the poor, the elderly, the earth itself, etc.) separate and apart from the work of salvation.

But that’s not the only superfluous, false, malicious sham Francis perpetrated that day.

He went on to speak of the important role played by the Curia in the work of “ecumenical dialogue,” saying:

It involves a journey, yet, as was also stated by my predecessors, it is an irreversible journey and not a going back.

Here, the Devil shows his hand yet again by claiming continuity with the teaching of previous popes, while at one and the same time renouncing what previous popes had taught.

Francis appears to be taking aim specifically at the teaching made clear by Pope Pius XI in Mortalium Animos; namely, that the “journey” toward Christian unity is precisely a matter of heretics and schismatics “going back” to Holy Mother Church:

For the union of Christians can only be promoted by promoting the return to the one true Church of Christ of those who are separated from it, for in the past they have unhappily left it.(Mortalium Animos 10)

Francis then expanded upon his notion of the “journey” toward Christian unity:

All the theological and ecclesiological differences that still divide Christians will only be surmounted along this path, although today we do not know how and when, but that it will happen according to what the Holy Spirit will suggest for the good of the Church.

We don’t know how Christian unity will happen?

Let me guess, the “God of Surprises” will point the way!

For authors who favor this view are accustomed, times almost without number, to bring forward these words of Christ: “That they all may be one…. And there shall be one fold and one shepherd,” with this signification however: that Christ Jesus merely expressed a desire and prayer, which still lacks its fulfillment. (Mortalium Animos 7)

All of that having been  said, there is a substantial degree of continuity between Francis and the likes of Popes Paul the Pathetic, John Paul the Great Ecumenist, and Benedict the Abdicator, as each of them would agree with everything he said.

Francis dished out yet another superfluous, false, malicious sham as it concerns the Church’s relationship with Judaism, Islam and other false religions.

On this note, he said:

…dialogue, [is] an authentic expression of our humanity, [it] is not a strategy for achieving specific goals.

Of what specific goal does he speak?

C’mon, we all know the answer:

Baptizing the nations and teaching them everything whatsoever that Our Lord commanded.

In conclusion, there is one other thing that Francis said that merits comment:

Here let me allude to another danger: those who betray the trust put in them and profiteer from the Church’s motherhood. I am speaking of persons carefully selected to give a greater vigour to the body and to the reform, but – failing to understand the lofty nature of their responsibility – let themselves be corrupted by ambition or vainglory. Then, when they are quietly sidelined, they wrongly declare themselves martyrs of the system, of a “Pope kept in the dark”, of the “old guard”…, rather than reciting a mea culpa.

My first thought when I read this last week was that he’s not, as many likely assume, speaking about Cardinal Maradiaga. (We now know that this is very likely true given today’s news from the Vatican.)

So, who then is he talking about?

Two men come to mind; Cardinal Raymond Burke and Cardinal Gerhard Muller, both of whom have indeed been “sidelined.” And did you notice? Francis thinks they owe him an apology.

Francis then went on to say:

Alongside these, there are others who are still working there, to whom all the time in the world is given to get back on the right track, in the hope that they find in the Church’s patience an opportunity for conversion and not for personal advantage.

In other words, Francis is letting it be known that he is merciful and slow to anger. Don’t laugh. I think he’s serious, and why not? He’s already anointed himself the “God of Surprises.”

As usual, Francis ended his superfluous, false, malicious sham of an address saying, “Please, pray for me.”

Yes, let us indulge him by praying for his conversion to the Holy Catholic faith.