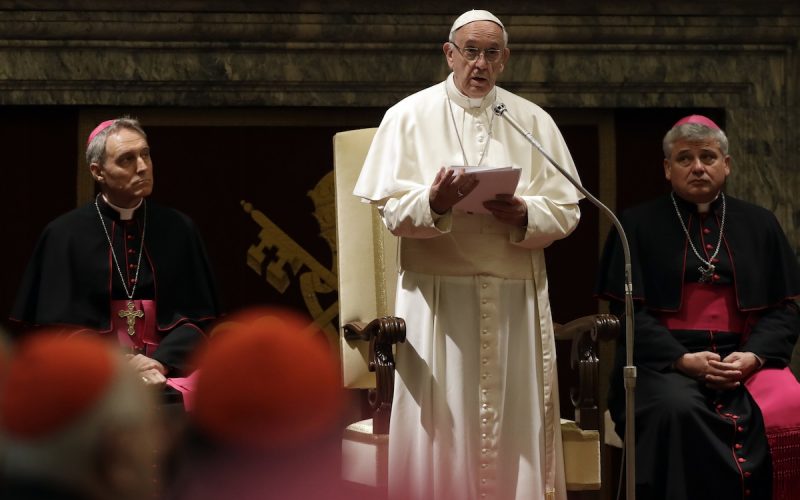 On December 21st, various cardinals and superiors of the Roman Curia gathered in the Sala Clementina for the annual Christmas Address; a message intended not just for those in attendance, but for all who work there.

For many among the Curial staff, this isn’t exactly the most wonderful time of the year.

Recall, if you will, the Bergoglian Christmas Addresses of years past as Francis used those occasions to diagnose the body’s assorted “diseases” and to berate its members.

It was in this environment – one described by insiders with increasing frequency as a “climate of fear” – wherein Francis delivered his 2017 Address; one that contained what can only be understood as a threat so thinly veiled as to be explicit.

Francis began in earnest by reminding the Curia that, according to Canon Law, it “‘performs its function,’ in the name and with the authority of the Supreme Pontiff, ‘for the good and service of the Churches.’”

Given his obvious disregard for Canon Law as it concerns canon 915, the level of hypocrisy here is almost beyond belief.

In any case, the point being made was clear enough; I’m in charge and you work for me.

Francis went on to say that the work of the Curia relative to the pope is one of “diaconal primacy,” of which he said:

[It] is above all the expression of a firm desire to imitate Christ, who took on the form of a servant.

The point being made in this case was equally clear; You exist to serve me.

This theme of a ministerial and curial diaconia reminds me of a phrase in the ancient Didascalia Apostolorum, which states…

Before we get to the threat that follows, let us stop here for just a moment to ask a question (rhetorical, to be sure):

Is there any chance that the “diaconal theme” just so happens to remind Francis of something Apostolic, or is it more likely that the exact opposite is true; namely, that he began crafting his message with a very specific point in mind, and then went about searching for a theme from tradition with which to connect it in order to make it sound “Catholic”?

Returning to where we left off:

… a phrase in the ancient Didascalia Apostolorum, which states that “the deacon must be the ear and the mouth of the Bishop, his heart and his soul.” For this agreement between the two is linked to communion, harmony and peace in the Church, inasmuch as “the deacon is the guardian of service in the Church”. I do not believe that it is by chance that the ear is the organ of hearing but also of balance; and that the mouth is the organ of both taste and speech.

Again, I remind you of the atmosphere in which this message was being delivered; the climate of fear. As such, there can be no doubt that his audience – in particular, those who are not on board with his agenda – heard the threat loud and clear:

There are those among you, my faithful servants, who are my ears, and make no mistake, nothing you say will go unnoticed. What’s more, from their mouth will I receive a report.

Another ancient text adds that deacons are called to be, as it were, the eyes of the Bishop. The eye sees in order to transmit images to the mind, helping it to take decisions and to give direction for the good of the whole body.

There are those among you, my faithful servants, who are my eyes, and make no mistake, nothing you do will go unnoticed. What’s more, I will “take decisions” as I see fit based upon the reports that I receive.

Just ask Cardinal Gerhard Muller, who as head of the CDF was forced by Francis to dismiss two trusted aids who were overheard saying things that displeased the “boss.”

As if anyone in the Curia needed to hear another word about their duty to serve Dear Leader, Francis added for good measure:

The relationship that these images suggest is that of communion in filial obedience.

At the conclusion to the Address, each of the men in attendance received a small gift; a book, but the most valuable thing that they, and their underlings, received that day was fair warning – Big Humble is watching.

When silence is poison