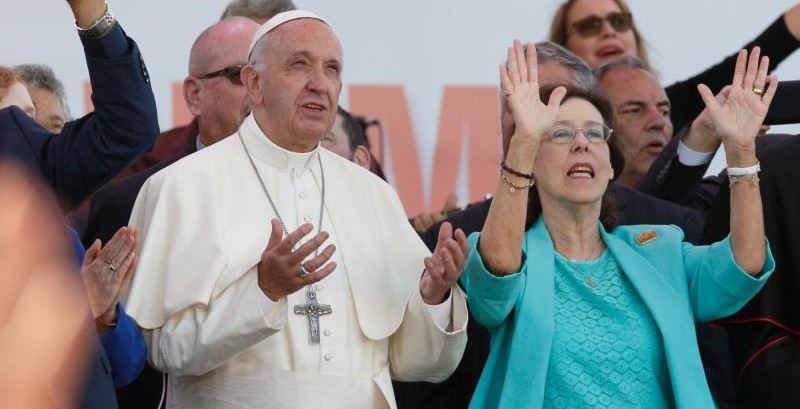 Yesterday, at the General Audience, Francis graciously continued his “catechesis” on the Mass; thus offering authentic Catholics everywhere yet another opportunity to suffer in union with Christ for the good of His Mystical Body, the Church.

With this end in mind, let’s take a closer look.

At fist blush, this particular installment may not appear quite as offensive as the others.

Bear in mind, however, that Francis is slowly building an edifice – “brick by brick” if you will – by which the faithful are ostensibly being led toward a deeper understanding of the sacred rites; one that rests (and must either stand or fall) upon a foundation that, as we have already observed, includes the following:

– “Mass” and “Eucharist” (Holy Communion) are strictly interchangeable; i.e., to participate in the one entails reception of the Other.

– The primary essence of the Mass is not Sacrifice, but rather “encounter” and “experience.”

– The priest serves merely as “presider” over the community assembled.

This week, Francis began examining the Novus Ordo itself, beginning with the so-called “Introductory Rites;” more specifically, the “Greeting” – The Lord be with you / And with your spirit.

We are in dialogue; we are at the beginning of the Mass and we must think of the meaning of all these gestures and words. We are entering a “symphony,” in which various tones of voice resound, including times of silence, in view of creating “agreement” among all the participants, namely, to recognize one another animated by one Spirit and by one same end.

In other words, the “Greeting” is intended to help the faithful “to recognize” (or stated otherwise, to experience) the communal nature of the rite, which can be likened to a “symphony.”

Francis is obviously rather enamored with this metaphor of the Mass as “symphony,” repeating it twice. Truth be told, it is very fitting given his distorted view of the Mass.

I mean, what would Mendelssohn’s “Italian” Symphony sound like without the oboes or the horns?

And so it is with the Mass, at least insofar as Francis is concerned, unless the community is there gathered.

In fact “the priestly greeting and the people’s response manifest the mystery of the gathered Church” (Ordinamento Generale del Messale Romano, 50). Expressed thus is the common faith and the mutual desire to be with the Lord and to live in unity with the whole community.

Here, Francis is quoting the General Instruction for the Roman Missal (GIRM), and one can only marvel at the hubris of the post-conciliar “reformers” who thought to paint something as earthbound and anthropocentric as “the gathered Church” (specifically, the people assembled) as a theological “mystery.”

On this point, Cardinal Ottaviani had this to say in his famous “Intervention”:

In the New Mass, the role attributed to the faithful is autonomous, absolute–and hence completely false. This is obvious not only from the new definition of the Mass (“…the sacred assembly or congregation of the people gathering together…”), but also from the General Instruction’s observation that the priest’s opening Greeting is meant to convey to the assembled community the presence of the Lord:

“Then through his greeting the priest declares to the assembled community that the Lord is present. This greeting and response express the mystery of the gathered Church.”

Is this the true presence of Christ? Yes, but only a spiritual presence. A mystery of the Church? Certainly–but only insofar as the assembly manifests and asks for Christ’s presence.

This new notion is stressed over and over again…

His Eminence’s point is that the presence of Jesus Christ in the Mass is not simply a matter of the assembly asking for as much; rather, our Lord (who is both High Priest and Sacrifice) is present in the Mass even apart from the assembly, and in a Real and substantial way (not purely spiritual) in the Most Holy Eucharist!

At this, we must acknowledge that the Novus Ordo GIRM has more to say on this topic:

The acclamations and the responses of the faithful to the Priest’s greetings and prayers constitute that level of active participation that is to be made by the assembled faithful in every form of the Mass, so that the action of the whole community may be clearly expressed and fostered. (GIRM 35)

The action of the whole community…

As I wrote when discussing the General Audience of last week, Francis’ so-called “catechesis” – for as Protestant and pathetic as it is – just so happens to be an accurate reflection of what the Novus Ordo Missae has to say for itself.

Keep this in mind as we continue with this exercise moving forward:

Francis is painting a false picture of the Mass indeed, but he is simply handing on the rotten fruit, born on a tree rooted in the Council, that was first crammed down the throat of the faithful by his “guiding light,” Paul VI.