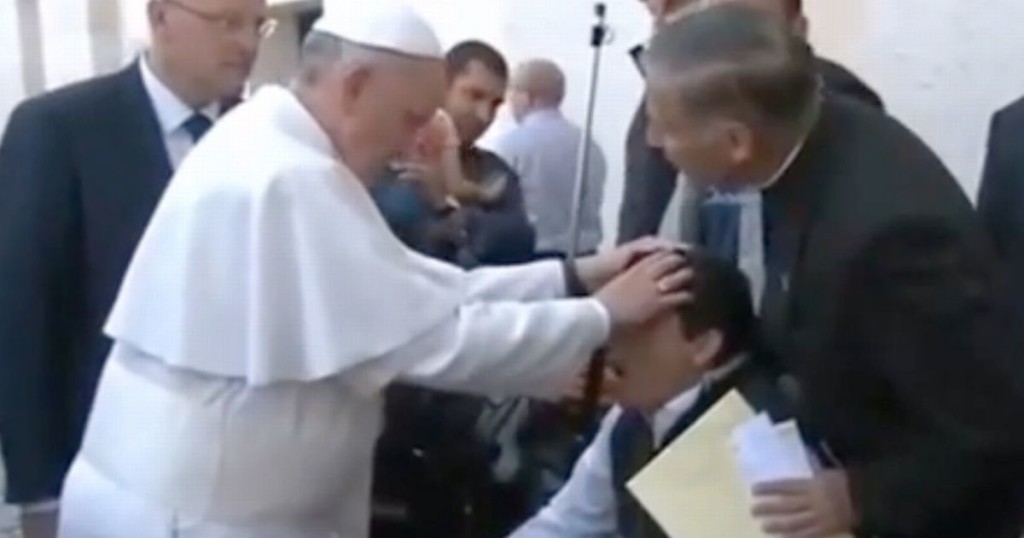 The Pope’s fight against Satan

As for which part of the headline is more difficult to believe – “pope” or “against Satan” – I’ll leave it for readers to decide. Here, we will focus on the latter.

In five years, [Francis] has quoted [Satan] more times than his predecessors have done together in the last half century: for Pope Bergoglio the devil, and his ability to divide, are common topics in his daily preaching. A countercurrent preaching, since the Evil One has long been a great absent. Here is a small and incomplete review of quotations.

First of all, I am struck by the amusingly inaccurate, and yet truthful, English translation of the Italian original provided by the publisher (La Stampa).

That said, it is indeed the case, for all intents and purposes, that Francis has consistently quoted the Evil One over the last five years, and in ways far too numerous to number.

For instance, when Francis points to the life of Martin Luther as an inspiration for Catholics, or calls on Muslims to persist in their false religion, or reassures Jews in their rejection of Christ, or teaches that the Divine Law is too difficult for some persons to keep, etc., rest assured, he is speaking as the Vicar of Beelzebub.

Perhaps it is true that Francis has mentioned the Devil “more times than his predecessors,” but what the examples above tell me (and presumably others with ears to hear) is that he doth protest too much; i.e., it’s a diversion tactic, even if it is employed in ignorance by an unwitting tool. (God alone will judge.)

And this isn’t the only subject about which Francis employs such a tactic.

Consider, for example, his protestations against Masonic and homosexual lobbies.

During his infamous “who am I to judge?” in-flight exchange with a reporter aboard Humble One, Francis said:

The problem is in making a lobby of this [homosexual] tendency: a lobby of misers, a lobby of politicians, a lobby of Masons, so many lobbies. For me, this is the greater problem.

No claimant to the Chair of St. Peter has behaved more like a Mason or done more to earn the praise of homo-deviants than Francis!

In any case, in support of his thesis, Andrea Tornielli provided a number of Bergoglian quotes; presumably selected because he believes that they pack the most punch.

Among them is this gem:

When one does not profess Jesus Christ, one professes the worldliness of the devil.

This from the so-called “People’s Pope” who addressed the United Nations for nearly fifty minutes in 2015, the European Union on multiple occasions, and various other gatherings too numerous to number without “professing Jesus Christ” even once.

Then there is this beauty:

[Satan]  presents things as if they were a good thing. But his intention is destruction, perhaps with humanistic explanations.

This from the same Argentinian humanist in white who urged a Vatican conference to make man, not our Lord Jesus Christ, but man “the center of society, the center of thoughts, the focus of reflection,” and this for the simple reason that man is, according to him, “King of the Universe!”

Lastly, and it’s a doozey:

The devil sows jealousy, ambitions, ideas, but to divide!

This from the Boss of the Curia who routinely hurls insults at the tradition-minded while lauding those who champion all manner of novelty; thus creating an unprecedented “us against them” atmosphere that has the latter gloating and the former constantly looking over their shoulder.

The bottom line here is eminently simple, folks; one is either with Christ or against Christ, gathering with Him or scattering.

Objectively speaking – as every moderately well-formed Catholics knows perfectly well, but all too few are willing to acknowledge – Francis isn’t fighting against Satan, he’s serving him.

How George Floyd “Changed the World”

Pick up your lacrosse…