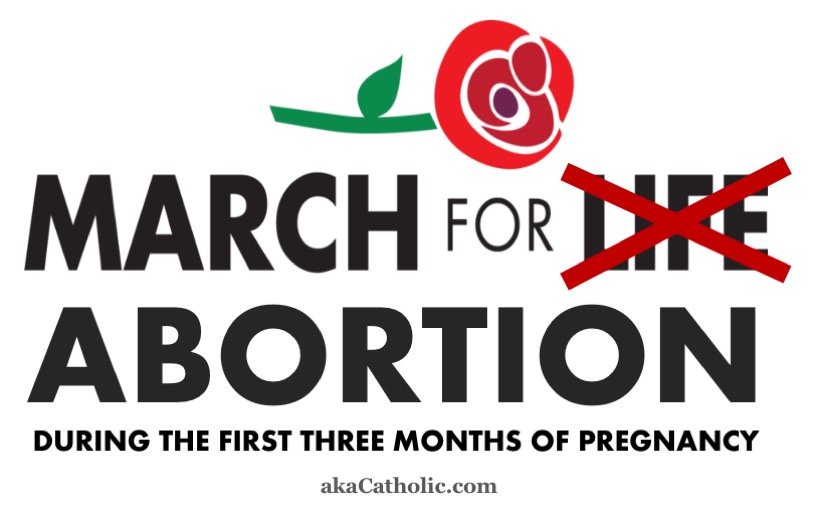 After having read the post, Carl A. Anderson: A Knight in Anti-Life Armor, a kind and diligent reader recently reached out to March for Life for clarification of their position. In his email, he asked a simple and straight forward question:

What is the March for Life’s official position on abortion in the first three months in the cases of rape, incest or to save the life of the mother?

In response, he received the following reply from Claire Pullan, an administrative assistant at March for Life:

Thank you for reaching out to us with your question. As is written in our mission statement, the March for Life exists to promote the beauty and dignity of every human life by working to end abortion—uniting, educating, and mobilizing pro-life people in the public square. This, of course, includes all abortions – no matter the circumstances or gestational age of the unborn child.

If only this were true. As I pointed out in the above referenced post, March for Life recently produced the ad below, which aired on network television and remains available for viewing on YouTube:

The following, taken from the transcript for this video, tells the real story as to what “March for Life exists to promote.”

America has consensus. 8 in 10 Americans agree. Abortion should have real legal limits.

Even 6 out of 10 pro-choice Americans agree that abortion should happen only during the first three months of pregnancy at most. That’s consensus.

Now they want us to pay for abortion. Our tax dollars.

It’s time for politicians to stop working for the pro-abortion lobby.

And join the national consensus.

March for Life spent God only knows how much money – funds donated to them by pro-life Americans, many of them Catholic, with much of it coming from the Knights of Columbus – to produce this ad. They allocated additional funds for television airtime in order to run this ad during the Democrat primary debates.

NB: This ad represents the core message that March for Life wishes to convey to a broader audience; i.e., beyond the confines of their own followers.

The content of the video and the agenda being promoted therein are perfectly plain:

It’s time for politicians to join the national consensus … that abortion should happen only during the first three months of pregnancy at most.

These are their words, and they stand in stark contrast to the clarification that March for Life recently sent to our reader. One notes with disgust that their video does not even hint at calling for an end to abortion “no matter the circumstances or gestational age” as they claimed. Indeed, their ad plainly advocates otherwise – namely, that “abortion should happen only during the first three months of pregnancy at most” – and this apart from any other condition such as cases of rape, incest or to save the life of the mother as our reader had asked.

The video above being their public position, one can only imagine the kinds of wink-and-nod backroom compromises March for Life may be encouraging behind the scenes as they lobby legislators, and all of this with hard earned money donated to them by sincere defenders of human life.

If you have not read the aforementioned post, Carl A. Anderson: A Knight in Anti-Life Armor, and the official response offered by the Knights of Columbus, please do so. In them you will find solid evidence indicating that March for Life has adopted the same compromise position espoused by Carl Anderson, under whose direction the Knights of Columbus have been donating $500,000 per year to March for Life.

I am hereby calling on March for Life to delete the above video from its YouTube channel and to issue a firm rejection of the very proposal put forth therein.

I am also calling on Carl A. Anderson to cease providing Knights of Columbus funding to March for Life until such time as this is done and, further, to publicly correct his own false statement as made in a 2016 editorial for The Hill in which he wrote:

To be perfectly clear, though it’s hardly necessary for readers of this space, the “Catholic position” on abortion is not that it “should be substantially restricted,” and Carl Anderson should very well know it.

Unless and until both of these organizations – March for Life and Knights of Columbus – unequivocally correct their public statements and positions on abortion, bringing them in line with authentic Church teaching, Catholic donors have a moral obligation to cease offering them financial, or any other, support.

In the meantime, make your voice heard by contacting these organizations using the information below:

Deposing Francis: The clock ticking as the plot thickens