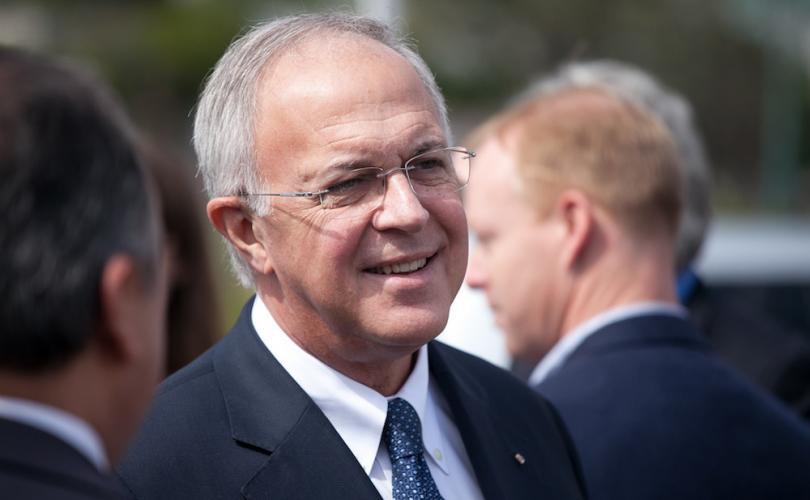 Unbeknownst to readers, I forwarded my April 20th post, Carl Anderson: Knight in Anti-Life Armor, to Andrew Walther, Vice President of Communications and Strategic Planning for the Knights of Columbus, requesting a response from Carl Anderson. Along with that request, I pledged to publish his response, if and when it should be offered.

A response from Mr. Anderson has yet to come. I did, however, receive a “statement” from Joseph Cullen, a member of the Knights’ communications staff. This statement, in its entirety, appears below in boldface, interspersed with my commentary. As readers will plainly see, it in no way serves to address the unsavory facts outlined in my article; rather, it is merely a public relations effort ordered toward burnishing the image of Carl Anderson, while cleverly deflecting attention away from the matter at hand.

Your recent post leaps to a wildly incorrect conclusion, and makes defamatory, slanderous and misleading allegations. Asking us for comment after you have posted something like this is precisely the opposite of an ethical approach. If you had a serious interest in the truth, you should have written us before you published and promoted it through social media. You should remove your story and its false allegations and apologize for bearing false witness.

The present issue concerns Mr. Anderson’s gross misrepresentation of “the Catholic position” on abortion, the truth of which is neither a matter of investigation nor debate. Whether or not Mr. Cullen or anyone else finds my method of addressing this issue objectionable is irrelevant.

Your allegations are particularly egregious since, as you should know, Carl Anderson has been active in the pro-life community opposing abortion, euthanasia, etc. since 1970. He has never supported abortion in any form. In fact, under his leadership, the Knights have provided more than 1200 ultrasound machines at a cost of $59 million to crisis pregnancy centers to help mothers understand and embrace the gift of life.  It is absurd and disingenuous to contend that support of pro-life legislation designed to limit the scope of abortion is somehow an endorsement of abortion at others times. To the contrary, Mr. Anderson’s use of this polling overtly supports taking a step that reduces the number of abortions while highlighting the extremism of those who will not accept even those abortion restrictions supported by the vast majority of Americans.

NB: Here, Mr. Cullen is shifting the conversation to “pro-life legislation” when, in fact, the matter at hand does not concern legislation at all. More on that momentarily.

One can perhaps understand why Mr. Anderson may wish to take credit for the laudable pro-life efforts of member Knights, especially in light of the present controversy. Even if such is granted, however, it simply is not true that “he has never supported abortion in any form.” This is not my opinion; rather, it is a matter of public record.

In his 2016 Op-Ed written for The Hill, Anderson plainly stated:

It is time for new thinking by Catholics in public office.  I would suggest two options. First, they should embrace the American consensus on abortion restrictions…

And what exactly is the “American consensus” to which Mr. Anderson refers? He writes:

According to Marist polling we commissioned, about eight in ten Americans want substantial restrictions on abortion. A solid majority would limit abortion at most only to rape, incest or to save the life of the mother. (ibid.)

NB: Carl A. Anderson, writing in his capacity as the Supreme Knight of the Knights of Columbus, has made his position plainly known: Catholics in public office should embrace the American consensus on abortion restrictions, [which] would limit abortion at most only to rape, incest or to save the life of the mother.

The words in italics above belong to Mr. Anderson and no one else, severely undermining the claim that “he has never supported abortion in any form.”

Note very well that Mr. Anderson appears to be counseling all Catholics in public office without distinction as to what they should embrace. This evidently includes those Catholic politicians that are firm in their conviction that even limited abortions can never be “embraced” because they are always and everywhere evil (the real Catholic position).

Is Anderson encouraging these faithful politicians to compromise their integrity and to stand on common ground with the party of death by consenting to abortion under certain circumstances? It certainly looks that way.

As you should also know, St. John Paul II’s encyclical Evangelium Vitae, in section 73, reaffirms the principle that one can support legislative solutions that seek to restrict abortion in certain ways when completely banning the procedure is not politically feasible. Specifically, St. John Paul II wrote that when confronting legalized abortion, a person known to be against abortion can “licitly support proposals aimed at limiting the harm done by such a law [that allows abortion] and at lessening its negative consequences at the level of general opinion and public morality. This does not in fact represent an illicit cooperation with an unjust law, but rather a legitimate and proper attempt to limit its evil aspects.”

The citation offered from Evangelium Vitae has been taken out of context in order to provide cover where none exists. The paragraph cited begins:

A particular problem of conscience can arise in cases where a legislative vote would be decisive for the passage of a more restrictive law, aimed at limiting the number of authorized abortions, in place of a more permissive law already passed or ready to be voted on. [Emphasis added]

When John Paul II states that one can “licitly support proposals aimed at limiting” abortion, he is speaking directly to legislators who may be faced with either supporting or rejecting specific legislation that would limit abortion in places where the status quo is more permissive. NB: The “licity” of doing so appears to be further limited to those occasions when the legislator is in a position to cast a “decisive” vote.

Carl Anderson isn’t a legislator, much less is he in a position to cast a vote on abortion legislation. Furthermore, his unfortunate op-ed isn’t addressing any such legislation before those who are. It is perfectly plain, therefore, that Mr. Cullen’s reference to Evangelium Vitae has no relevance whatsoever to the matter at hand.

To be perfectly clear, Evangelium Vitae most certainly does not grant a license to high profile Catholics, like Mr. Anderson, to leverage their considerable influence to instruct Catholic politicians to embrace a compromise platform that endorses abortion in cases of rape, incest or to save the life of the mother.

The text of Evangelium Vitae does, however, seem to shed light on the present matter where it is written:

In the case of an intrinsically unjust law, such as a law permitting abortion or euthanasia, it is therefore never licit to obey it, or to take part in a propaganda campaign in favor of such a law, or vote for it. (ibid., art. 73)

A law that permits abortion in cases of rape, incest or to save the life of the mother is undoubtedly an unjust law. And yet, Mr. Anderson is openly campaigning in favor of Catholic politicians embracing a platform in support of precisely this position. This flies directly in the face of the spirit, if not the letter, of Evangelium Vitae.

Contrary to St. John Paul II’s teaching, it seems your view would eliminate the vast majority of pro-life victories over the past four decades because you appear to believe that pro-life legislation that actually reduces the number of abortions somehow instead supports abortion. If this is in fact your view, it is important for your readers to understand that the consequences of your thinking would be to increase the overall number of abortions and that this opinion diverges substantially from clearly articulated Catholic principles.

Once again, the present issue does not concern pro-life legislation at all. In fact, Mr. Cullen’s statement fails to address the central fact of the matter entirely.

It is an undisputed matter of public record that Carl A. Anderson grossly misrepresented Catholic teaching on abortion when he wrote:

…only to rape, incest or to save the life of the mother.

The “Catholic position”  on abortion, as every reader of this space very well knows, is unwavering and crystal clear; it is an intrinsic evil that is never licit under any condition.

Also left unaddressed by Mr. Cullen is the fact that the March for Life, evidently inspired to a considerable degree by Mr. Anderson’s erroneous position, has gone further still. As stated in their recent video:

Abortion should happen only during the first three months of pregnancy. At most. That’s consensus.

It’s time for politicians to stop working for the pro-abortion lobby. And join the national consensus.

If, as Mr. Cullen claims, Carl Anderson “has never supported abortion in any form,” why are the Knights of Columbus under his leadership donating more than half-a-million dollars per year to an organization that is pushing this diabolical agenda, one that is clearly irreconcilable with Catholic teaching?

In conclusion, Carl A. Anderson has much for which to answer. It is my hope that he will act on his duty to do so personally and in short order.

In an effort to be perfectly plain, a suitable response from Mr. Anderson, the same that each and every Knight should insist upon, would include the following:

– An unambiguous statement making it plain that the “Catholic position” on abortion is NOT that “it should be substantially restricted” (as he previously stated), but rather that it is an intrinsic evil that is never licit under any condition, including during the first trimester, in cases of rape, incest, or to save the life of the mother.

– An unambiguous statement calling on the March for Life to align its position with immutable, non-negotiable Catholic teaching on abortion, apart from which the Knights of Columbus, a Catholic fraternal organization, will withdraw its financial support.

I will keep readers informed of any future developments. In the meantime, I’m asking member Knights to share this post with their brother Knights and, furthermore, to call on Carl Anderson to take the above noted corrective measures, making it very clear that anything short of this is entirely unacceptable.