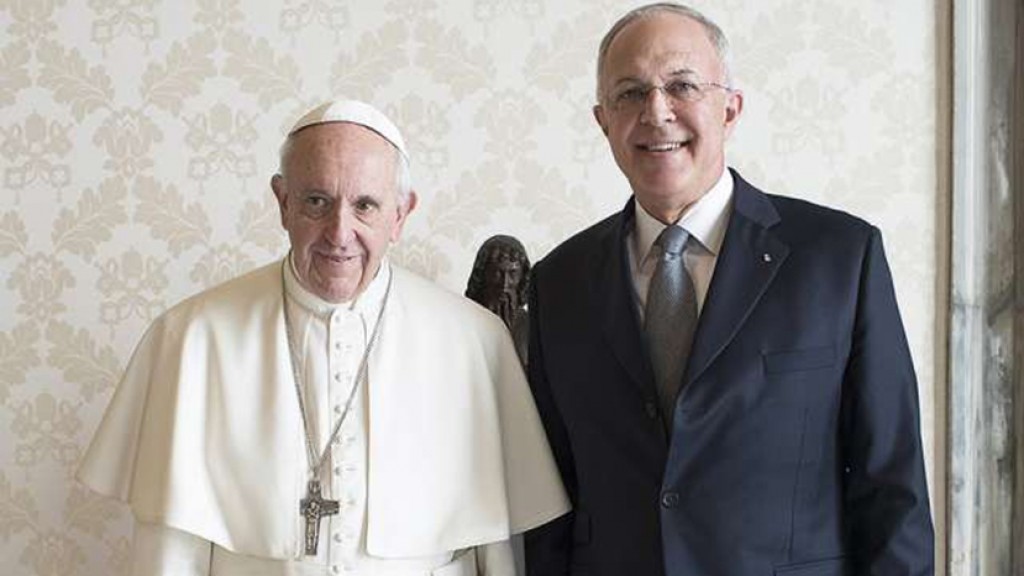 The U.S. presidential election is less than half-a-year away. Though most of the nation’s attention is presently focused on the coronavirus panicdemic, one can well expect that persons of influence will begin leveraging their positions to shape, however they might, the priorities and opinions of both candidates and constituents.

Among them, Carl A. Anderson, Supreme Knight of the Knights of Columbus.

My purpose in this exposé is to highlight the nature and impact of Anderson’s activities in this regard, most notably as it concerns the sanctity of human life. At the conclusion, I will pose a very important question to rank and file KofC members:

Are you satisfied with what you are receiving in return for all of your good faith efforts on behalf of the Knights of Columbus, the same that serve to finance the Supreme Knight’s considerable influence?

In 2016, in the months before the election, Anderson penned an editorial for The Hill in which he wrote:

[The late New York Gov. Mario Cuomo, in a speech at Notre Dame in 1984] said: “As a Catholic I accept the church’s teaching authority. … I accept the bishops’ position that abortion is to be avoided.” …

Still, he maintained that abortion should be protected legally.

About this, Anderson concluded:

Such an argument by a Catholic politician was bogus then, and it is untenable now.

One cannot but agree with Anderson’s assessment of Cuomo’s position, one most unworthy of a Catholic (self-proclaimed, at any rate) politician.

More reprehensible still, however, would be the leader of a Catholic fraternal organization some 2 million members strong blatantly misrepresenting Church teaching on the matter, and that is precisely what Anderson went on to do.

After arguing that science itself confirms that abortion is the taking of a human life, Anderson then went full bore Americanist, stating:

There is a second more serious problem. The argument rests on the assumption that legally restricting abortion is the minority view.  That simply is not true.

Think about what you just read.

Carl Anderson would have the naïve and ill-informed believe that the Catholic politician’s opposition to the voice of the majority is a “more serious problem” than his support for an intrinsic evil, which is nothing less grave than opposition to the Divine Law!

As if what has been stated thus far hasn’t sufficiently alerted the reader to Anderson’s stunning lack of sensus Catholicus, he went on to state:

And what exactly does Anderson mean by “substantially restricted”? He tells us:

According to Marist polling we commissioned, about eight in ten Americans want substantial restrictions on abortion. A solid majority would limit abortion at most only to rape, incest or to save the life of the mother.

Are you paying attention, Knights? Carl A. Anderson is using his lavishly compensated position in order to broadcast a dangerous lie, namely: The Catholic position is that abortion should be substantially restricted at most only to rape, incest or to save the life of the mother.

And this, he declares (as if it is cause for celebration) “is now the public’s consensus by a wide margin.”

Anderson went on to make his own position crystal clear: He insisted that Catholic politicians, “should embrace the American consensus on abortion restrictions.”

At this, please spare me the foolhardy notion that aborting innocent human beings in a limited number of cases is “a step in the right direction;” it is always evil, and Catholic teaching is perfectly clear on this point. Exceptions, no matter how few or far between, are seeds of the diabolical that will most certainly flourish in time. Either every human life is sacred, or it is not.

In May of 2019, Anderson penned a similar essay for the Des Moines Register that has since found a permanent home on the Knights official website titled, The Silent Democratic Majority on Abortion. In it, he once again set about promoting his disgustingly anti-life, un-Catholic view of abortion.

Anderson writes, among other things:

…earlier this year, the Marist Poll – one of the country’s most respected surveys – found a broad consensus among the American people. By about three-to-one, Americans oppose abortion after 20 weeks – or don’t want it at all. This includes about eight in 10 Republicans and independents and nearly six in 10 Democrats.

This survey also found that 80 percent of Americans support limiting abortion to at most the first three months of a pregnancy. This included nearly two-thirds of those identifying as pro-choice and a similar number of Democrats (64 percent). The poll was commissioned by the Knights of Columbus.

Let’s stop here for a moment. The poll was commissioned by the Knights of Columbus. In other words, Marist was paid to conduct this poll with money earned on the backs of member Knights and other Catholics of good faith who contribute to their efforts. Moving on, Anderson states:

Given what the polling has revealed about attitudes toward abortion among Democrats, it seems obvious that a strong majority of Democrats, including Catholics and working-class voters, would have good reason to prefer a candidate who supports substantial restrictions on abortion.

It would be better for America – and for the unborn – if Democratic candidates listened to the electorate again … It’s time to say that abortion isn’t a matter of party politics – it’s a matter of national consensus.

Did you get that? The Supreme Knight (who happens to live more like a king) is calling for politicians to embrace the will of the people, over and against the Divine Law, in favor of merely limiting abortion.

But wait, that’s not all member Knights are getting in return for their labors.

According to Supreme Knight and CEO Carl A. Anderson, when the March for Life began in the early 1970s, the Knights of Columbus was one of the first groups to lend a hand. Anderson told CNA that the Knights now play a part in “just about everything that needs to be done” on the days leading up to, and during, the march.

Sounds terrific until one takes a closer look.

Each year, Knights of Columbus Charities USA donates over $500,000 to the March for Life, and this doesn’t include donations made directly by individual Councils, nor does it account for the manpower it provides for the event.

Along with all of those millions of man hours and dollars comes a great deal of influence.

As such, it may perhaps come as little surprise that the March for Life has sold its soul to the Supreme Knight by embracing the stance promoted by its major benefactor, mimicking Anderson’s decidedly un-Catholic position in favor of abortion in certain cases.

Don’t take it from me, check it out for yourself in the following video produced by March for Life. You may have already seen it as the video was used for an ad campaign, reportedly costing more than six figures, that ran on television during the Democrat presidential primary debates:

Once again, I ask, were you paying attention? The video states:

Abortion should happen only during the first three months of pregnancy. At most. That’s consensus. It’s time for politicians to stop working for the pro-abortion lobby. And join the national consensus. – March for Life, citing Knights of Columbus financed polling and the position taken by Supreme Knight Carl A. Anderson

On the Knights of Columbus website is a page under the title, in large, bold, capital letters:

TO BE A KNIGHT IS TO BE PRO-LIFE

What follows is a list of “five major ways in which the Knights of Columbus stand up to defend unborn human life.” Number one on that list is… you guessed it, the March for Life, which thanks to the nefarious activities and influence of Carl A. Anderson is boldly promoting the diabolical notion that Abortion should happen only during the first three months of pregnancy.

With all of this having been exposed for your consideration, member Knights, I ask you:

Are you satisfied with what you are receiving in return for all of your good faith efforts on behalf of the Knights of Columbus, the same that serve to finance the Supreme Knight’s considerable influence?

If you answered “no,” as any Catholic of good will must, I implore you to demand the ouster of Carl Anderson as Supreme Knight, making it clear that, apart from this, you are perfectly willing to rescind your membership.

Please be sure to forward this article to each and every Knight with whom you have contact, confident in the words of Our Blessed Lord who is the Life, The truth shall make you free.

Amoris Laetitia: A revolution in language