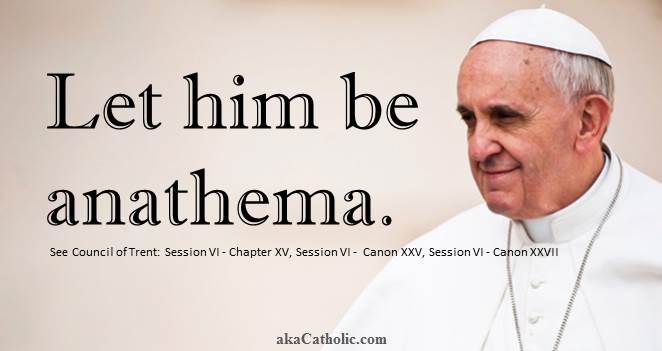 I know… Many of you have already blurted the answer out loud. Even so, humor me and keep reading.

In the aftermath of Francis’ unambiguous clarification that Amoris Laetitia is an invitation to Holy Communion for those who obstinately persist in mortal sin, the neo-Catholic world has gone into full meltdown mode.

In at least one noteworthy case, namely, that of Robert Royal, it would appear that the scales may be falling from some eyes. In others, not so much.

Jeff Mirus at Catholic Culture, for instance, penned a defense of His Humbleness under the oh-so-lengthy-why-bother-to-read-any-further title, Not heretical: Pope Francis’ approval of the Argentine bishops’ policy on invalid marriages. (I read it in its entirety anyway so you don’t have to torture yourself, but feel free.)

… some Catholics are now saying that Pope Francis has crossed the line from doctrinal fuzziness to material heresy. But this is not at all the case.

It is not incompatible with the Church’s doctrinal teaching on either marriage or Communion to argue that, under some circumstances, persons involved in invalid marriages ought to be admitted to Communion.

Actually,  some Catholics… you know… the ones whose heads haven’t been buried shoulders deep in the sand, have been saying that Francis crossed the line a very long time ago and for very good reason.

Be that as it may, let’s be very clear about the “persons” Francis and Mirus are discussing:

We are talking about persons who obstinately persist in a relationship characterized by the grave sin of adultery.

In his attempt to defend Francis, Mirus contends that the Church has always said that such persons “ought to be admitted to Communion under some circumstances.”

As holy Communion may be (and perhaps even should be, assuming sorrow for sin, CCC 1393) taken by one in venial sin, Mirus argues that some divorced-and-remarried Catholics should feel free to approach for holy Communion. Now, everything Mirus says so far is at least arguably, and much of it is actually, true.

What part of Adultery = Mortal Sin do these people fail to understand?

Remember, the Beunos Aires bishops’ directive of which Francis said, “There are no other interpretations” provides the following scenario as an example of one wherein the invitation to Communion is possible:

An invalid “second marriage” (civil) wherein at least one party remains validly married to another person. An annulment isn’t “feasible,” and one or both parties refuse to live in continence.

Sure sounds like the mortal sin of adultery to me.

Ed Peters goes on to say in his qualified defense of Jeff Mirus:

“One’s approaching for holy Communion is a matter of personal conscience chiefly guided by Canon 916.” [Emphasis in original.]

Can. 916: Anyone who is conscious of grave sin may not celebrate Mass or receive the Body of the Lord without previously having been to sacramental confession, unless there is a grave reason and there is no opportunity to confess; in this case the person is to remember the obligation to make an act of perfect contrition, which includes the resolve to go to confession as soon as possible.

Even if one allows that a “grave reason” exists in the case under discussion (we’ll take a closer look at this momentarily)  what follows in Canon 916 is crucial: and there is no opportunity to confess.

The canon even makes clear that the obligation to confess, with perfect contrition, remains; all of which implies that the would-be recipient of Communion in this case has a firm purpose of amendment to cease committing adultery.

This doesn’t even come close to describing the hypothetical scenario provided by the Argentine bishops and endorsed by Francis!

Mirus, however, thinks he found a loophole that exonerates all concerned.

In order for a sin to be mortal, he reminds us, three things are required.

Let’s review these requirements, and more importantly, let’s see if they apply to the scenario described in the Beunos Aires directive:

Mirus, not to be deterred, provided his own make believe scenario by engaging in what is readily recognized as an exercise in good ol’ fashioned situation ethics. He writes:

Very briefly, then, I would argue that the following is the most likely scenario in which the presumption that only venial sin is involved may be reasonably justified:

Yes, God forbid the children be deprived of a father who uses his presence in the family home as a bargaining chip in order to extort sex from their mother!

According to the “likely scenario” provided by Mirus, the so-called “reasonable justification” for downgrading adultery to a venial sin thereby opening the way to Holy Communion ceases to be valid once the kids grow up.

I can just see it now…

Suzy: Jim, I have some bad news for you. Our youngest is turning 18 tomorrow. I am cutting you off at the stroke of midnight… no pun intended.

This is the kind of absurdity that arises when one attempts to make excuses for the inexcusable rather than simply upholding objective truth.

I have an idea… How about we add a sixth item to Mirus’ list; one that apparently never crossed his mind – a Catholic one that Francis would shudder to even imagine:

6. During the much ballyhooed “process of accompaniment” with his or her pastor, the persons having sex outside of marriage are made aware that means do not justify ends; i.e., a good intention does not render an objectively evil act good, therefore, the obligation to desist from the mortal sin remains, and until such time as their lives are so amended the sacraments may not be approached.

As it is, Mirus’ “likely scenario” is reminiscent of a similar attempt to defend Francis after he publicly endorsed the use of “oral contraception” and “condoms” in light of the Zika virus scare.

Readers may recall that Fr. Robert Gahl, an Associate Professor of moral philosophy at the Pontifical University of the Holy Cross, said that Francis must have had in mind, get this:

“…extreme scenarios in which, for instance, a woman is threatened by a violent, Zika-infected husband to have sexual intercourse with her.”

What the Hell is it with these people?

What Mirus and Gahl have in common is that they are far more comfortable with convoluted scenarios wherein women are forced to engage in sex against their will than they are with admitting the plain truth about Francis.

Ed Peters, to his credit, does correct Mirus on two important points:

First, he points out that Canon 915 requires the Minister of Holy Communion not to admit those who obstinately persist in manifest grave sin; irrespective of the would-be recipient’s personal “conscience.”

I have repeatedly made the point that the rules governing reception of Communion are disciplinary, not doctrinal.

Let’s stop here for a moment. Notice that Mirus is unashamed, perhaps even proud, of having made this idiotic assertion repeatedly; as if the disciplines governing the reception of Holy Communion are not inextricably linked to the immutable doctrines from which they arise. We’ll come back to this…

It is impossible to prove that advocacy of any disciplinary approach indicates heresy in the mind of the advocate.

That is not correct. A classic example pointed to a man whose refusal to abide by disciplinary norms such as genuflecting before the tabernacle might show a wordless, but clearly heretical, denial of the Real Presence.

NOTE: I wonder if Peters has anyone in particular in mind here… say, a certain Argentinian in white who has no trouble dropping to his knees when the Humblecam is rolling but never manages to do so before the Most Holy Eucharist?

Mirus writes as if “the mind of the advocate” in this matter is a mystery.

Please, the mind of Francis has never been a mystery. He has been dumping its poisonous contents on everyone within earshot for more than three years now.  We have been calling him to account for his heterodoxy on these pages since March 2013!

In the present case, “the mind of the advocate” is spelled out with remarkable clarity in the pages of Amoris Laetitia, of which Francis owns every last condemnable word.

This brings me back to the inextricable link that exists between doctrine and discipline.

Just as the venerable discipline of the Church is a direct outgrowth of authentic Catholic doctrine, so too is the sacrilege being promoted by Francis the outgrowth of the false doctrine set forth in Amoris Laetitia!

Long story short, folks, there is no mystery here:

Jorge Mario Bergoglio, alias Francis, is a blasphemous heretic who with every passing day is inching ever closer to proving his pertinacity beyond any reasonable doubt.