For those who strive to comprehend what is truly taking place at Holy Mass, at least to the extent that poor sinners like us are able, the sacred rite is truly awe inspiring. It is Heaven on earth and a glorious foreshadowing of things to come.

Writing in his comprehensive, indispensable work, The Mass, Fr. Joseph Dunney explained it in part as follows:

To eyes of faith, a divine spectacle presents itself as the liturgy rises steadily toward the climax of the Consecration. We peer into that which lies beyond, while in undertones of quiet gravity the priest recites the Communicantes. There is a new scene upon which the keen vision of faith dwells. Suddenly we are brought into the company of the elect; a stately procession passes before our soul’s eyes – Mary, the Mother of God, the Apostles, martyrs, and confessors; and we are put into communication with all the saints who stand before the throne of God.

Earth breaks up; Time drops away.

In flows with its new day.

At the same time, there is one part of Holy Mass in particular – a prayer – that is breathtaking for an entirely different reason.

Far from providing the faithful with an awe inspiring taste of Heavenly things, it calls the mind back to earth with a stark reminder that we are as yet but members of the Church Militant and thus exposed to all manner of trials and tribulations; instilling in the attentive nothing less than a sense of foreboding.

The prayer of which I speak is that following the Agnus Dei:

Lord Jesus Christ, who saidst to Thine Apostles: Peace I leave with you, My peace I give unto you: look not upon my sins but upon the faith of Thy Church; and deign to grant her that peace and unity which is in accord with Thy will: Who livest and reignest God, world without end. Amen.

Turning once more to Fr. Dunney:

“Regard the faith of thy Church.” Consider the Church’s strong adherence to everything that Christ has said and done. When it is a question of what our Lord teaches, she is always outspoken, always fearless. Never has she veiled her teaching under the mask of prudence, never proved coward in her fealty to Jesus Christ. This is the victory by which she overcomes the world. 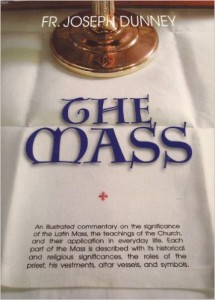 As Fr. Dunney wrote, Pope Pius XI was gloriously reigning. The modernists, thanks to the efforts of his predecessors; in particular, Pope St. Pius X, had been neutered and driven underground. The voice of the Church was strong and clear.

In the years immediately following the publication of The Mass, the Holy Father would promulgate Quas Primas and Mortalim Amimos – proclaiming the Social Kingship of Christ and condemning the burgeoning errors of the ecumenical movement, respectively – thus proving Fr. Dunney’s thesis of a fearless and outspoken Church entirely correct.

More noteworthy still, as Fr. Dunney put pen to paper, Vatican II and the crisis of faith that would emerge therefrom were still decades away…

As such, he could not know that, for those of us living in the dark shadow of the Council, the prayer for peace that is offered at Holy Mass can take on an entirely different character; namely, that of a warning.

Note well that the “faith of Thy Church” of which this prayer speaks is not so much the unchangeable Faith that comes to us from the Apostles as it is the “faith” that is made manifest (or not) as her members live, express and defend it, and this in a particular way by the Roman Pontiff.

In the words of Fr. Dunney, “This is the victory by which she overcomes the world.”

In our day, what does the Lord see when He looks down upon the “faith” of His Church, so-called?

Far from seeing outspokenness, fearlessness and fealty, He sees churchmen rushing to deny His teachings! He sees cowardly men who dare not speak the truth plainly! He sees men who behave as if man is sovereign and all religions are means of salvation!

In short, the “faith” of the Church in our day is one with the world; i.e., the world, in large measure, has overcome the Church!

Indeed, we know that the world will not succeed in winning the war, but only a fool can deny that we are, at present, losing the battle for the soul of society, and this for having dethroned its only true King.

With all of this in mind, consider once more the prayer for peace at Holy Mass:

Lord Jesus Christ, who saidst to Thine Apostles: Peace I leave with you, My peace I give unto you: look not upon my sins but upon the faith of Thy Church; and deign to grant her that peace and unity which is in accord with Thy will: Who livest and reignest God, world without end. Amen.

As Fr. Dunney suggests, there is an inextricable connection between the faith of the Church as made manifest in her members – in particular on the part of those who are charged with teaching, sanctifying and governing us – and the degree to which peace will be realized in the present order.

This, my friends, should cause each and every one of us to shudder.

If we are honest, we must admit that the faithlessness of the Church in our day is such that we deserve nothing other than peacelessness in return.

As such, those among us who, by the grace of God, have retained the sensus Catholicus are compelled to beg Our Lord not to look too intently upon the faith of the Church, but rather to accept our heartfelt acts of reparation, our humble prayers, and our meager sacrifices offered for the conversion of those who lead us and for the healing of His Mystical Body here on earth.

All roads lead to Fatima…

When we consider the peace that is in accord with the Lord’s will, our attention should immediately be drawn to the message of Our Lady of Fatima. There, she told us plainly how her Divine Son wills that peace should be attained.

As I write, the man known as Francis is preparing to participate in yet another interfaith abomination in Assisi; an earthbound travesty called “Thirst for Peace” wherein Jesus Christ and the Holy Catholic faith will once more be placed shoulder-to-shoulder with all manner of false gods and godless religions.

Bear this in mind the next time you assist at Holy Mass and petition the Lord to “look upon the faith of Thy Church,” and then praise Him all the more that He is merciful and slow to anger.

We are living under a chastisement at this very moment, to be sure, and yet we can also be certain that Our Blessed Lady is, to large extent, restraining the hand of her Divine Son.

Justice, however, cannot be forestalled forever; something must eventually give.

The time is already late.