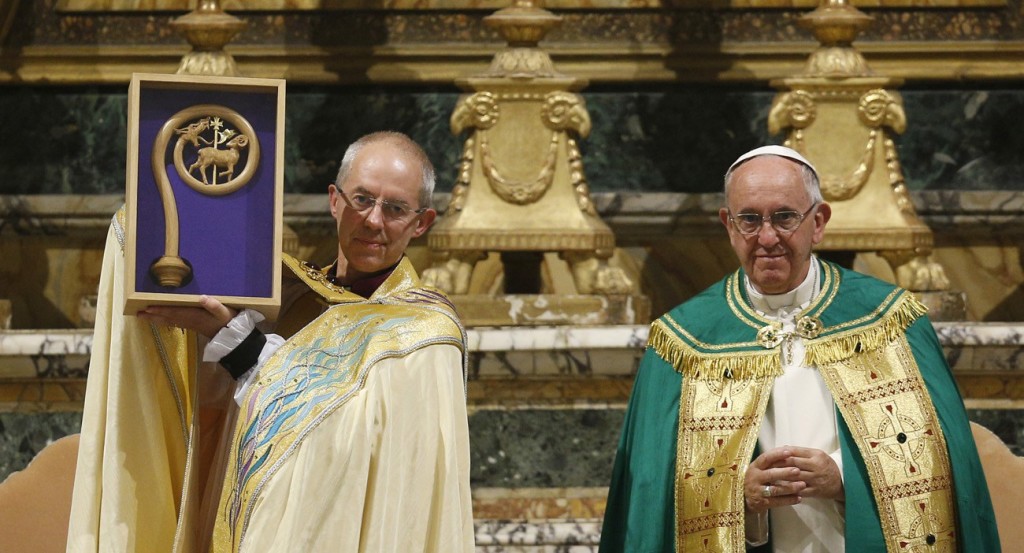 Since posting on the German intercommunion dust-up, I’ve been researching and reading trying to connect a few dots that might tell us a bit more about where we’re headed. What I discovered is not surprising, but I will admit, it’s not exactly what I was expecting either.

On Monday, June 4, just as news was breaking that Francis had ordered several dicasteries of the Roman Curia “to clarify soon” questions concerning the matter of intercommunion with Protestants “on the level of the Universal Church,” His Humbleness was addressing The Delegation of the German Lutheran Evangelical Church.

Surely the controversial so-called “pastoral handout” produced by the German Bishops Conference, which seeks to open pathways to Communion for Protestants with a Catholic spouse, was well on the minds of both Francis and his guests as he spoke.

Would he throw the heretics a morsel or two; perhaps just enough to whet their appetite for a sign of things to come?

Ever the showman who never fails to disappoint his adoring audience, of course he did.

Encouraging the Lutherans to be open to the Holy Spirit (in this case, “the God of Surprises”) who “alone opens the way and enlightens the steps to be taken” in the ecumenical process, Francis said:

With the help of God, we hope for a future striving towards the complete overcoming of divergences. We have to move on.

The complete overcoming of divergences…

This, my friends, is clearly a reference to intercommunion; one so obvious that it would be wrong to call it a “hint.” And what’s more, according to Francis, we have to do it.

Know this, however – a complete overcoming concerns more than just Eucharistic communion. This is the pinnacle (or penultimate, as the case may be), and so it also entails everything related to it and under it. More on that momentarily…

Francis went on to urge his Lutheran listeners to accept the “pressing invitation to reach an ever more concrete and visible unity among us.”

This is yet another obvious reference to intercommunion and, as I wrote, barring Divine intervention, it’s coming. It’s not a matter of if, but when and how.

As for why, or the excuse in any case, the German bishops have indicated that theirs is an effort to alleviate the angst experienced by the non-Catholic spouse in a mixed marriage, as if this qualifies as “grave necessity.” (see Code of Canon Law – 844, referenced HERE)

It’s a lame excuse, indeed, but guess what? The German bishops didn’t invent the idea.

The official Catholic-Lutheran dialogue will begin a deeper exploration of common beliefs and differences on “church, Eucharist and ministry,” the Vatican and the Lutheran World Federation announced.

“We acknowledge our joint pastoral responsibility to respond to the spiritual thirst and hunger of our people to be one in Christ,” the two leaders said in 2016. “We long for this wound in the Body of Christ to be healed. This is the goal of our ecumenical endeavors, which we wish to advance, also by renewing our commitment to theological dialogue.”

In this, we are given insight not just into why, but also into how intercommunion will come about; it will be the fruit of a joint effort on the part of both the Vatican and the Lutheran World Federation – initially, that is.

This, it appears to me, will be step number one; after which, any remaining barriers to intercommunion with just about anyone (i.e., including, but not limited simply to Protestants married to Catholics) will tumble like dominoes.

We can be certain that a joint Vatican-LWF declaration ordered toward opening the way to intercommunion is well in the works already, and may even be nearing completion.

In January, as reported by Vatican News Service, Francis acknowledged receipt of a joint statement created by the Lutheran Catholic Dialogue Commission for Finland.

To the Ecumenical Delegation Pope Francis said the document for which he is grateful, contains ecclesiological implications that must be part of the agenda of ecumenical dialogues.

It is entitled: “Communion in Growth. Declaration on the Church, Eucharist and Ministry”, and Francis noted that it reflects decisive issues to which ecumenical dialogue can and must now turn its attention.

It is a lengthy text (some 170 pages, available via the hyperlink above) – importantly, one that Francis has all but made his own – although the punchline is very simple.

The Declaration cites “the substantial elements on which agreement is required” for Eucharistic communion, and it concludes that “there seems good reason to hope that a differentiated consensus” may be reached.

NB: It then goes on to provide a very important caveat.

However, before any further conclusions are drawn, we need further discussion on the last issue: recognition of the validity and sacramental character of the ministry.

Neither is this an original thought.

Readers may recall that the USCCB and the Evangelical Lutheran Church in America issued a similar joint declaration in October of 2015 entitled, Declaration on the Way: Church, Ministry and Eucharist, and it drew a similar conclusion:

While there is already substantial agreement concerning the eucharist itself, full eucharistic communion depends also upon the mutual recognition of ministry, which is in turn dependent upon the recognition of each ecclesial community as truly apostolic.

One wonders, when did these national ecumenical groups get the idea to produce such joint statements linking “Church, Ministry and Eucharist”?

It may come as a surprise to some, but the directive didn’t go out on Bergoglio’s watch, but rather on that of Benedict XVI. As explained in the USCCB press release announcing the above-mentioned declaration:

In December 2011, Cardinal Kurt Koch, president of the Pontifical Council for Promoting Christian Unity, proposed a declaration to seal in agreements in the areas of the church, ministry and the Eucharist.

Now, seven years later, according to at least two such regional declarations, it is necessary for us to recognize that the Lutherans enjoy Apostolic succession.

Impossible, you say? Pope Leo XIII, in Apostolicae Curae, made it plain that Anglican orders are “absolutely null and utterly void,” you insist?

Not so fast… Remember, there’s a new regime in place, and the “God of Surprises” will not be denied.

One of the Vatican’s top legal minds has opened the way for a revision of the Catholic position on Anglican orders by stressing they should not be written off as “invalid.”

“When someone is ordained in the Anglican Church and becomes a parish priest in a community, we cannot say that nothing has happened, that everything is ‘invalid’…”

At this, the picture is perhaps getting clearer as to why Francis deemed the German pastoral handout not yet ripe for publication.

All things being equal, does he want to see such a policy enacted?

Yes, of course, he does, but let us not forget that he is a politician at heart. As such, one can be certain that he has been closely monitoring reaction to the proposed German bishops’ handout in order to gauge the broader ecclesial climate.

All indications are, it seems, he has decided that pushback to the German initiative is not only manageable, it is such that the iron is evidently hot for the striking on a related agenda item; one that is also very near and dear to his heart – namely, the validation of Anglican orders.

This one has been simmering on the back burner for decades on end, going all the way back to the man that Francis calls his “bright light” – the soon to be “canonized” Paul VI.

As The Tablet article reported:

Cardinal Coccopalmerio also recalled Pope Paul VI’s meeting with then Archbishop of Canterbury, Michael Ramsey, in 1966. It was a famous meeting as the Pope gave the archbishop his episcopal ring and also, according to the cardinal, a chalice.

We know where Jorge’s heart lies, not only with regard to the latter, but the former as well: Recall him bowing his head for Justin Welby’s blessing in June of 2014, and more significantly, that he bestowed upon Welby a crozier – a sign of episcopal jurisdiction – in October of 2016.

So here’s the takeaway:

Francis is no spring chicken. His time is limited and he knows it. In spite of so many reports that he has “rejected” or otherwise ruled against the German pastoral handout, his only real issue with it is that it’s small potatoes compared to what he really wants to accomplish before death comes calling.

While I stand by my prediction that universal norms for intercommunion are coming, and sooner rather than later, I think it’s reasonable to expect that the validation of Anglican orders may very well accompany or precede them.

And all of this in preparation for the ultimate goal; a One World Religion.

Is the SSPX preparing for regularization?