Home
Blog Post
Is the fullness of Antichrist’s time come? 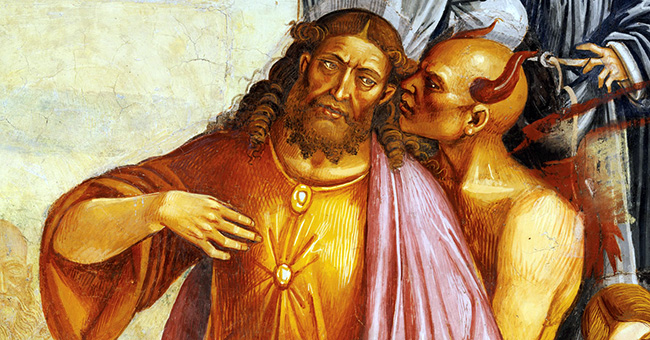 Over the past several weeks, I’ve watched a number of video presentations given by highly credible physicians and scientists who, using the government’s own data and guidelines, are calling into question the wisdom of implementing COVID-19 lockdowns.

The gatekeepers of information responded by banning many of them, forcing those who still value the scientific method – the accumulation of objective data through observation; the formulation of hypotheses; the conducting of experiments; the weighing of results and, based on these, the drawing of conclusions – to retreat to alternative platforms.

It occurs to me that these videos are very much like those detailing the disgusting reality of the genocidal procedure known as abortion. In other words, it seems rather plain that fear mongering corona-nazis and their supporters are no more willing to consider a genuine scientific explanation of virology and immunology than a radical pro-abortionist is willing to view the horrors of an actual abortion.

When this COVID-19 nightmare began, there were many in the “pro-life” community who, having succumbed to fear of the unknown and the media’s nonstop predictions of doom, were very much in favor of closing businesses, suspending recreational and religious activities, sheltering in place, etc.

As time has passed and the reality of the situation has become clearer, however, that number appears to have dwindled considerably.

As more time goes by, it seems reasonable to expect that, eventually, practically every single corona-nazi will also be a card carrying supporter of Planned Parenthood and other such operations; i.e., the two sides will more closely come to be identified along strict political party lines. In fact, we’re very close to that being the situation right now.

And what is the common thread shared by the corona-nazi/pro-abortion positions?

We can name many, but at the heart of each of these positions lies a willful refusal to even consider the truth that is readily perceptible to the intellect, a posture that necessarily includes an unwillingness to conform one’s opinions and actions in accord with said truth using the gift of reason.

In other words, in spite of any claims to the contrary, the corona-nazis among us reject the one true God who, in Christ Jesus, is Truth and Logos incarnate.

Sure, there are exceptions, like those who are at genuinely high risk from COVID-19 and may be overzealous in foisting their fears and concerns upon the broader society, but it appears to me that this is largely how things are shaking out.

But, but, religion and politics are two separate things!

To imagine that religion should, or even possibly can, be removed from politics is utterly laughable. It’s a position derived directly from the notion that “the State must be separated from the Church,” a thesis that Pope St. Pius X called, “absolutely false, a most pernicious error.” (Vehementer Nos 3)

Bottom line, folks, COVID-19, real though it is, is being leveraged by the ruling class as an excuse for tightening its grip on nearly every aspect of their subjects’ lives – public, private, economic, recreational and religious, with the latter being ground zero. (And you thought it was Wuhan or New York City!)

Truly, this is a battle between the godly and the godless; it is a precursor to the end times, even if only a dry run for that which will usher in the days of the Antichrist, a man understood by Saints and Doctors of the Church as a tyrannical figure who will demand to be worshiped as God.

St. John Damascene described the days of the Antichrist as follows:

During the first part of his reign — of his tyranny rather — he plays more the part of sanctity; but when he gains complete control, he persecutes the Church of God and reveals all his wickedness.

He will ally himself with the kings, the princes and the powerful ones of the earth.

These reflections suggest that the Antichrist will be an inversion Our Lord, Christ the King. He will present himself as the real “King of kings,” a sovereign imbued with evil to whom the rulers of the earth will be subject, a tyrant who exercises control over the nations through them, deceiving the masses, persecuting the Church and her faithful, and demanding the worship that is due to God alone.

His coming to power will force men to take a stand; either to suffer the cost of remaining in truth, or to acquiesce to the demands of evil by accepting the mark of the beast.

One of the takeaways from this dreadful COVID-19 exercise is just how ripe the world appears to be for the coming of the Antichrist:

– Look at just how easily the forces of evil acting in the world today have managed to exercise near total control of the narrative in order to deceive the nations.

– See how quickly so many of the world’s rulers fell in line, consenting to the demands of self-proclaimed authorities – some eagerly, others more reluctantly.

– Consider how the lockdown was sanctimoniously sold to the naive as a life-affirming “We’re all in this together” initiative, only to be revealed plainly for the weapon against both God and humanity that it is.

– Witness how clearly the battle lines have been drawn between the godly and the godless as circumstances have forced everyone to choose a side.

– Note how swiftly the ruling class was able to separate the people from the Mass, from the Sacraments and from one another – all with barely a whimper from even so-called “traditionalist” churchmen.

It’s enough to make one wonder if the fulness of Antichrist’s time is come.