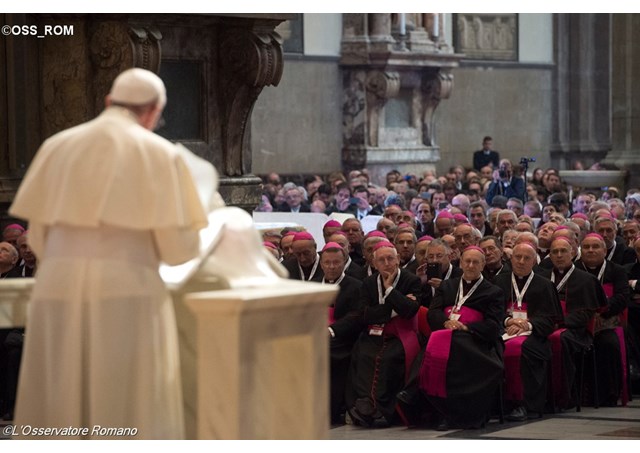 Earlier today, Pope Francis delivered an address to the Convention of the Italian Church held at the Cathedral of Santa Maria del Fiore in Florence.

Though he did not specifically mention by name the Synod on Marriage and Family, much less the anticipated Apostolic Exhortation that it allegedly inspired, Pope Francis did reveal, or perhaps more accurately said, he confirmed, his upcoming plan of attack aimed at removing and all obstacles that might stand between unrepentant public sinners (and eventually even non-Catholics) and the Most Holy Eucharist.

On a number of occasions during the address, the humble Bishop of Rome drew from the treasury of faith belonging to his most cherished go-to source for theological insight; himself.

Quoting from Evangelii Gaudium, for example, he said:

The humanity of the Christian is always outward-looking. … Please, let us avoid ‘remaining shut up within structures which give us a false sense of security, within rules which make us harsh judges, within habits that make us feel safe.’

Here, Francis is referring to article no. 49 of that wondrous well of wisdom some 53,000 words deep; the same of which Cardinal Burke once famously remarked, “It’s a distinct kind of document, and I haven’t quite figured out in my mind exactly how to describe it. But I would not think that it was intended to be part of papal magisterium. At least that’s my impression of it.”

Reading this portion of Evangelii Gaudium now in hindsight, one discovers a hint, given all the way back in November of 2013, of Francis’ intent to open wide the doors of Holy Communion to all comers in the name of mercy.

Let us go forth, then, let us go forth to offer everyone the life of Jesus Christ. Here I repeat for the entire Church what I have often said to the priests and laity of Buenos Aires: I prefer a Church which is bruised, hurting and dirty because it has been out on the streets, rather than a Church which is unhealthy from being confined and from clinging to its own security. (EG 49)

One notices yet again the humbleness of he who cannot help but quote himself. In spite of being truly tragic, it’s actually somewhat hilarious.

That said, the key statement to be found here, however, is this: to offer everyone the life of Jesus Christ…

How exactly does the Church offer the life of Christ to her children most profoundly?

In the Most Holy Eucharist, of course.

I do not want a Church concerned with being at the centre and then ends by being caught up in a web of obsessions and procedures. If something should rightly disturb us and trouble our consciences, it is the fact that so many of our brothers and sisters are living without the strength, light and consolation born of friendship with Jesus Christ, without a community of faith to support them, without meaning and a goal in life. More than by fear of going astray, my hope is that we will be moved by the fear of remaining shut up within structures which give us a false sense of security, within rules which make us harsh judges, within habits which make us feel safe, while at our door people are starving and Jesus does not tire of saying to us: “Give them something to eat” (Mk 6:37). (ibid.)

Though it is hardly necessary for most readers, please allow me to translate these statements relative to the “pastoral practices” currently in question (at least in the minds of the revolutionaries):

I want the Church to relax her procedures with regard to Holy Communion. Let not your consciences be troubled when the civilly divorced and remarried, the cohabitating, active homosexuals and other unrepentant public sinners are called forth to receive the Most Holy Eucharist; rather, be troubled when they are excluded! These people are starving! Did not Jesus say, “Give them something to eat”? Therefore, I will take steps to open wide the doors to Holy Communion for all!

During his address given today in Florence, Pope Francis hammered on this theme further by engaging in one of his favorite pastimes; belittling so-called “traditionalists” (aka Catholics) saying:

The first [temptation to be avoided] is that of Pelagianism, which leads the Church not to be humble, selfless and blessed. … Often it leads us even to assuming a style of control, of hardness, normativity. Rules give to the Pelagian the security of feeling superior, of having a precise orientation. In this it finds its strength, not in the soft breath of the Spirit. Faced with the ills or the problems of the Church, it is useless to seek solutions in conservatism or fundamentalism, in the restoration of outdated forms and conduct that have no capacity for meaning, even culturally.

“Forms,” like the Traditional Latin Mass, and “conduct,” like approaching Holy Communion only when properly disposed, are “outdated” and without meaning; never mind religious meaning, hell, they don’t even have cultural meaning!

Now, pay very close attention to the words that he chose to speak as he continued:

Christian doctrine is not a closed system incapable of generating questions, doubts and uncertainties, but it is living, it knows how to disturb and to encourage. Its face is not rigid, it has a body that moves and develops, it has tender flesh; Christian doctrine is called Jesus Christ.

When have we heard such commentary before?

Well, for one, about two months ago when Pope Francis (who loves him some Pope Francis) sent a video message to a gathering of theologians in Argentina wherein he said:

Doctrine is not a closed system, with no dynamics that generate questions, doubts, queries. By contrast, the Christian doctrine has a face, has a body, has flesh, His name is Jesus Christ…

Of far more importance for those who may be so naïve as to think that the Kasperian Proposal died at the Synod, however, one should note that Pope Francis is not only quoting himself here, he is also quoting Cardinal Walter Kasper.

In a sit down with the Italian daily Il Mattino, “mafia club” member Walter Kasper (street name, “the Ghost”) said of those cardinals who had voiced opposition to his radical proposals concerning Holy Communion for the civilly divorced and remarried:

They claim to know on their own what truth is, but Catholic doctrine is not a closed system, but a living tradition that develops. They want to crystallize the truth in certain formulas … the formulas of tradition. None of my brother cardinals has ever spoken with me. I, on the other hand, have spoken twice with the Holy Father. I arranged everything with him. He was in agreement.

This interview was given in September of 2014. That’s right, over one year ago; in the tumultuous lead up to the Extraordinary Synod.

So, you see, when Pope Francis parroted Walter Kasper in suggesting that Catholic doctrine is “not a closed system” in his address given earlier today in Florence, there can be no doubt whatsoever that he is speaking with the matters addressed at the recently concluded Synod, and more specifically, his upcoming Apostolic Exhortation, in mind.

So, did Francis give us anything concrete that might be considered insight into the document’s contents?

Yes, he gave us quite a bit, saying:

But then, you will ask, what must we do? What is the Pope asking of us? It is up to you to decide: people and pastor together.

There you have it, folks; the upcoming Apostolic Exhortation will state precisely what Eugenio Scalfari reported to be the words of the pope:

… for that which regards the admission of the divorced to the Sacraments … this is the bottom line result, the de facto appraisals are entrusted to the confessors, but at the end of faster or slower paths, all the divorced who ask will be admitted.

In his Florence address, Francis went on to address his desire concerning the role of the bishops:

I ask the bishops to be pastors. Nothing more: pastors. May this be your joy: ‘I am a pastor’. It will be the people, your flock, who support you. … May nothing and no-one remove from you the joy of being supported by your people. As pastors, do not be preachers of complex doctrines, but rather announcers of Christ, Who died and rose again for us. Focus on the essential, the kerygma. There is nothing more solid, profound and sure than this announcement. But may it be all the people of God who announce the Gospel, people and pastors.

Francis wants pastors who not only smell like the sheep, but who rely upon the sheep for support! So much for reliance upon Jesus Christ; the Good Shepherd to whom they are configured in order to teach, sanctify and govern in His name and with His authority.

Expanding upon his vision of a quasi-democratic church, Francis continued (quoting himself and his address to the theologians in Argentina once more):

May the Church be a leaven for dialogue, encounter, unity. Indeed, our very formulations of faith are the fruit of dialogue and encounter between different cultures, communities and claims. We must not be afraid of dialogue; on the contrary, it is precisely comparison and criticism that helps us to preserve theology from being transformed into ideology.

These are the words of a dyed-in-the-wool modernist. Period.

He is telling the bishops to avoid preaching the doctrine of the Church as it has always been preserved and preached, but rather to enter into Almighty Dialogue with the sheep in order to fashion new “formulations of faith.”

Lest one harbor even a shred of doubt that Jorge Bergoglio is fully committed to inflicting upon the entire Church the tenets of modernism, this “synthesis of all heresies” wherein its adherents show forth “the reforming mania which possesses them [such that] in all Catholicism there is absolutely nothing on which it does not fasten” (Pope St. Pius X, Pascendi Dominici Gregis), note that Francis even went so far as to say:

I would like a restless Italian Church, ever closer to the abandoned, the forgotten, the imperfect. I wish for a joyful Church with the face of a mother, who understands, accompanies and caresses. May you too dream of this Church, believe in her, innovate freely.

Rest assured, my friends, on this note, Jorge Bergoglio intends to lead by example: He simply will not rest until he has done everything in his power (i.e., abusing it) to innovate whatever he can, however he damn well pleases.

Someone has to stop this maniac, but sadly it would seem that we have reached the point in this terrible crisis when even the best of men in Rome have not the faith to stand up and challenge him.

Know this: Our Lord loves us too much to allow this madness to continue. At some point, God only knows when, He will allow something truly terrible to take place that will bring the entire human family to its collective knees, so that we might turn our gaze toward Him and be saved.

No doubt, it will be painful beyond comprehension, but perhaps there are those reading this now who will live long enough to see the results:

The elevation of truly Holy Father who will do as Our Blessed Lady has asked, opening the way for the triumph of the Immaculate Heart at long last.

The deafening silence of “conservative” Catholics