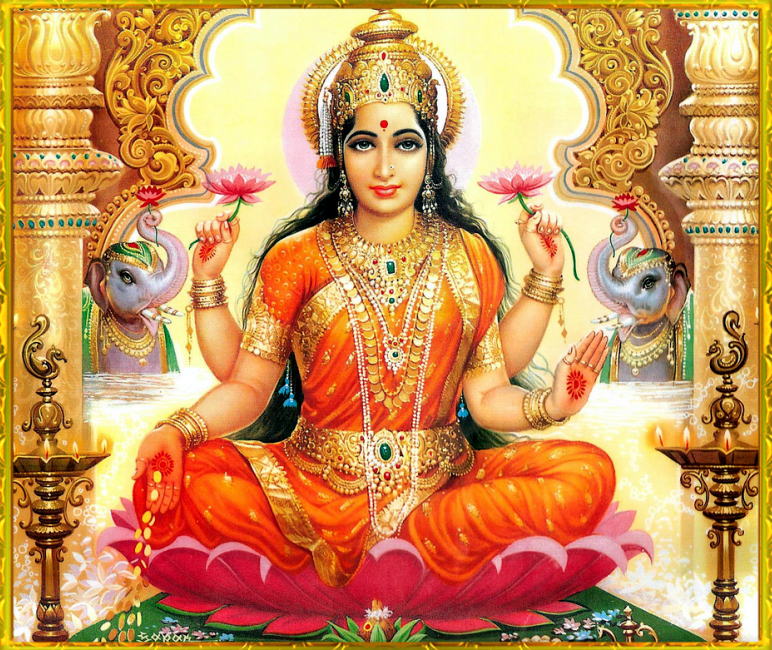 She is, according to the pagans that invented her, the goddess of wealth and prosperity. Her name is derived from the Sanskrit word laksme, meaning “goal;” the significance of which being that those who worship Lakshmi will supposedly receive aid in attaining their goal in life of worldly and spiritual prosperity.

As the Hindus tell it, Lakshmi is the divine spouse of Lord Vishnu; the god who maintains and preserves all of creation, and he does so by appropriating the wealth that is provided to him by his spouse.

Vishnu is but one god of the so-called “Hindu trinity,” which consists of Brahma, Vishnu and Shiva, who are the creator, the preserver and the destroyer of the universe respectively.

Clearly, for the pagan Hindus, Lakshmi, while not a member of their “trinity,” is a uniquely powerful goddess; for without her mediation, the destroyer would prevail and creation itself would be in jeopardy!

I find it rather interesting the degree to which parallels exist between the roles assigned by Hindus to their false goddess, Lakshmi, and those that actually belong to the Blessed Virgin Mary – spouse of the Holy Ghost of whom Our Lord was born in His sacred humanity and Mediatrix of all Graces; she who dispenses the fruits of redemption in such way as to help poor sinners attain to their solitary goal in this life – eternal salvation.

Furthermore, as Our Lady said to the children at La Salette, “If My people do not return to God by penance, I shall be forced to let fall the Hand of My Son, it now presses so heavily that I can scarce hold it any longer.”

As such, the Blessed Virgin forestalls the devastating effects of sin, the stock and trade of Satan, the would-be destroyer of all that is good; i.e., all of creation. (And God saw all the things that he had made, and they were very good. Gen 1:31)

As we know, the Evil One will not prevail; for in the end, just as Our Lady promised at Fatima, the Immaculate Heart of Mary will triumph.

This triumph of the Immaculate Heart, however, will come about only after a very simple request is met.

In what constitutes the second part of the secret given at Fatima, Our Lady told little Lucia:

I shall come to ask for the Communions of reparation and for the consecration of Russia to My Immaculate Heart … If my requests are heeded, Russia will be converted, and there will be peace; if not, she will spread her errors throughout the world, causing wars and persecutions of the Church. The good will be martyred, the Holy Father will have much to suffer, various nations will be annihilated.

As promised, Our Lady did indeed come to ask for that consecration, in 1929 to be exact, but it remains as yet unaccomplished. So too does the Blessed Virgin Mary’s request concerning the so-called Third Secret of Fatima, which was, according to her wishes, to be revealed to the world in 1960.

As for the significance of 1960, this Secret would, according to Our Lady, make more sense in that year; the same point in time during which preparations were being made for the windows of the Church to be opened to the world by way of the Second Vatican Council.

To this day, the contents of the Third Secret remain undisclosed in their fullness, but as testimony given by numerous churchmen who had read the Secret makes plain, it concerns a crisis of faith in the Church that extends even to the highest places in Rome.

For instance, Cardinal Mario Luigi Ciappi, who served as personal theologian to five popes from 1955-1989 said:

In the Third Secret, it is foretold, among other things, that the Great Apostasy in the Church begins at the top.

While failing thus far, like his predecessors, to either consecrate Russia to the Immaculate Heart of Mary, or to reveal the full contents of the Third Secret of Fatima, Pope Francis has, at the very least, helped to clarify matters by making it painfully obvious that the Church has indeed fallen into apostasy.

This is the same Bishop of Rome who will one day make a great public spectacle of his supposed Marian devotion, yet on another will desecrate the altar at Santa Maria Maggiore with a common beach ball, and even go so far on another as to suggest that Our Blessed Lady may have been tempted to think God a liar!

With all of this in mind, one can hardly be surprised to witness the men who occupy the positions of power in the Rome of today likewise thumbing their nose at the Blessed Virgin, even to the point of encouraging Hindus to persevere in their worship of her pathetic pagan parallel, Lakshmi, and what’s worse, to do so under the pretense of speaking in the name of the Holy Catholic Church!

Just as in years past (dating at least as far back as 1997), the Pontifical Council for Inter-religious Dialogue recently published a “Message to Hindus on the occasion of the Feast of Deepavali;” a four day pagan festival during which Hindus offer special worship to the four armed sugarmama, Lakshmi (pictured above), who will somehow make their dreams of prosperity come true.

The Pontifical Council for Interreligious Dialogue sends you warm greetings as you celebrate Deepavali on 11 November 2015. May your celebrations across the globe lead you to an experience of happiness and harmony in your families and communities.

From here the message launches into a call for a shared commitment to confronting the “human ecological crisis threatening our planet,” with multiple references to the book-length Green Encyclical of Pope Francis, Laudao Si’, (copies of which, fittingly printed exclusively on recycled toilet paper, are available for purchase from the Vatican Library).

Whereas the Holy Catholic Church will never cease to profess conversion to Christ as the solitary way of peace, the apostates running the show in Rome today have little interest in even mentioning His name, saying to the Hindus:

lf peace is to prevail in the world, we must, together and as individuals, consciously give ourselves to protecting nature, defending the poor, and building networks of respect and fraternity.

Concluding with a wish for “all a joyous Deepavali,” the message states:

Praying for a healthy ecology and creating awareness of the various ways to care for creation is a truly ennobling work.

Praying to whom, I suppose, just isn’t all that important to the frauds parading about the Vatican these days.

Even in this day and age when false doctrines and preposterous pronouncements flow out of Rome on a near daily basis like so much excrement through a well-greased sewage pipe, truly, this document is a difficult read.

First of all, there can be little doubt that only a minuscule fraction of the world’s Hindus even know that this idiotic screed exists, and even fewer still give a sacred cow’s ass what the self-congratulating, open-minded, interreligious phonies in Rome think about their pagan practices.

The dirty little secret, however, is that the message’s authors know this very well.

For whom, then, was the message written?

It was written for “us;” more specifically, for sincere but all-too-often naïve individuals who want nothing more than to be Catholic.

In other words, it was written in service to the illusion, for the benefit of those who are so diabolically disoriented that they simply don’t know any better (clergy and religious included), that this is how Successors to the Apostles, and indeed all Christians, are called to carry out their God-given mission.

Sure, even among this group, only a small handful know that the latest Deepavali message exists, but it’s worth the effort to the Captains of Newchurch to put pen to paper each year on the off chance that it may just serve as one more contribution to the overall indoctrination of would-be Catholics into the One-World Religion of Apostate Rome.

At this, I invite you to torture yourself by reading the “Unholy See’s” latest message to Hindus directly, excruciating though it may be. Seriously, go ahead.

Why bother, you ask?

So you might be able to do your part in seeing to it that the effort backfires.

By passing it along as irrefutable evidence to the contrary to those who, in spite of their suspicions, may as yet still deny that Rome has fallen into apostasy at the hands of faithless men – prelates so Hell bent on Diabolical endeavors that they will even go so far as to have the Blessed Virgin Mary scoot over to make room for a pagan goddess.