Home
Blog Post
Francis and the revolution against the Logos 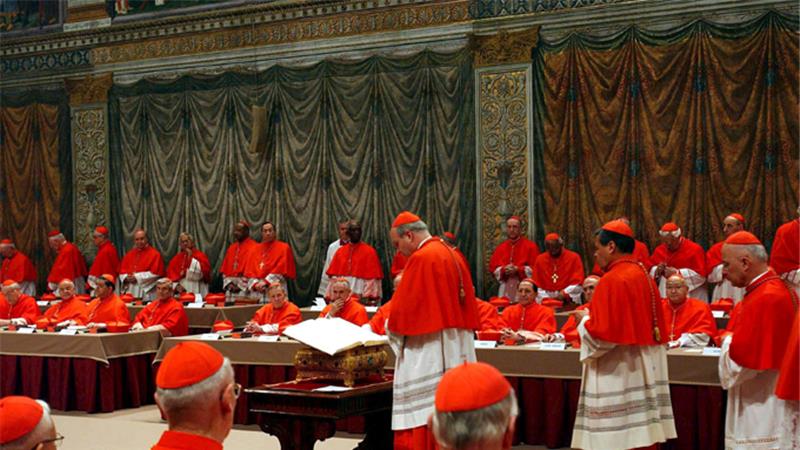 In a January 2014 article for First Things, George Weigel shared the following vignette:

At an academic conference years ago, a distinguished Catholic philosopher remarked (perhaps hyperbolically) that “If the pope said that ‘2+2 = 5,’ I’d believe him.” An even more distinguished Catholic philosopher gave the correct, and far more Catholic, response: “If the Holy Father said that ‘2+2 = 5,’ I would say publicly, ‘Perhaps I have misunderstood His Holiness’s meaning.’ Privately, I would pray for his sanity.”

Whether or not this charming little exchange between Catholic philosophers actually occurred some years ago matters very little.

What does matter, and a great deal, however, is that something far more serious is happening in the Church in real life, and the stakes could hardly be higher.

Rather than proposing a nonsensical mathematical formula that every thinking human being is immediately capable of recognizing as absurd, Francis is actively promoting theological nonsense that far too many are either unable, or unwilling, to recognize as the blasphemy and heresy that it truly is.

The correct and only Catholic response to such things is to publicly warn others of the grave danger that Francis’ errors represent and to pray for his conversion.

Even many of those who presumably “get it,” however, find themselves (like the “more distinguished” philosopher in Weigel’s story) incapable of moving beyond imagining that perhaps “His Holiness’s meaning” is being misunderstood.

Such persons can bear only to speak of certain “ambiguities” in the text of Amoris Laetitia, and to call for “clarifications” in light of what Francis “seems” to be saying.

For example, in a recent essay, Catholic Professor of Philosophy, Edward Feser, writes:

Then there is the fact that the Argentine bishops’ directive for implementing Amoris also appears to be saying that “living in continence” – that is to say, refraining from sexual intercourse — “may not, in fact, be feasible” for some couples living in an adulterous relationship, and that the couple “would fall into a subsequent fault by damaging the children of the new union” if they did so refrain … And in this case, not only has Pope Francis not rejected the Argentine bishops’ interpretation, he has warmly endorsed it.

Feser goes on to clarify what the Argentine bishops’ directive, and Francis, “appear” to be proposing:

(1) Adulterous sexual acts are in some special circumstances morally permissible.

(2) It is sometimes impossible to obey the divine commandment against engaging in adulterous sexual acts.

Even after having acknowledged that Francis “warmly endorsed” these very propositions, Feser states:

This does not entail that Pope Francis really is committed to propositions (1) and (2) or to any other proposition that contradicts Church teaching.  After all, in a now famous interview with Fr. Spadaro three years ago, the pope said that while he has “not spoken much about” the Church’s controversial teachings vis-à-vis sexual morality, nevertheless “the teaching of the church… is clear and I am a son of the church.”

The trouble is that if the pope would reject (1) and (2), then it is simply not clear exactly what Amoris is teaching, especially if the Argentine bishops’ interpretation is correct, as the pope has said it is.  There is cognitive dissonance here that needs to be resolved.

Yes, there is cognitive dissonance here to be sure!

The remedy, however, is rather obvious; namely, taking Francis at his word and facing that reality head on.

The enemies of the Church are, as Pope St. Pius X warned, crafty by nature, “striving, by arts, entirely new and full of subtlety…” (cf . Pascendi Dominici Gregis).

Being inspired by the Evil One, however, they are also immensely prideful – even to the point where they cannot help but boast openly of their true intentions; if only one has ears to hear and the wherewithal to listen.

For instance, when Francis disseminates a text throughout the Universal Church suggesting that adultery and fornication are not necessarily mortal sins (AL 301), that the demands of the Divine Law in the matter are impossible for some persons to keep (ibid.), that God Himself asks us to persist in such acts (AL 303), and then issues a letter explicitly saying “there are no other interpretations,” why not simply accept that this is precisely what he means to say?

Feser, not unlike so many others in the Church today, apparently has an irrational fear of viewing the matter plainly, and likely for the very same reason that Francis is unwilling to answer the five simple YES/NO questions posed in the dubia:

Each one is imbued with the ethos of the Second Vatican Council, and has, either unwittingly or not, substantially rejected the Logos – the “rational order of the universe” as expressed in human language with the highest degree of precision and clarity possible this side of Heaven in the immutable doctrines of the Holy Catholic Church.

In a 2012 lecture given in light of the 50th anniversary of the Council’s calling, Cardinal Godfried Danneels (yes, he of St. Gallen’s mafia fame) described it as follows:

Up until that time (1962), the language of ecclesiastical authority was primarily juridical and legislative language. It was rational, conceptual, concise, and clear‐cut. Vatican II chose a more pastorally‐oriented language: less clear‐cut, suggestive, not determinant, calm, and serenely dialogical.

Get that? The Council deliberately oriented itself away from the “rational” and the “clear cut;” the same that Francis scoffs at as the “black and white” of mere “rigorists.”

My friends, this is nothing less than a rejection of the Logos – He who said, “He who is not with me is against me, and he who does not gather with me scatters.”

It is for this reason that the Jesuit historian Fr. John O’Malley, S.J., author of the book What Happened at Vatican II, did well to describe the Council as a “linguistic event;” a new way of expressing things that “marked a definitive break with previous Councils.”

With all of this in mind, it may come as little surprise to readers of this space that the French Revolution, wherein the rights of man were boldly asserted over and against the rights of Christ the King and His Holy Catholic Church, has also been described as a “linguistic event.”

Indeed, the uber-liberal Cardinal Suenens is well known for having declared with glee that “Vatican II is the 1789 of the Church!”

This brings us back to Amoris Laetitia…

Recall, if you will, that prior to declaring that “there are no other interpretations” of Amoris Laetitia than that found in the directives of the Buenos Aires bishops, Francis pointed to the presentation on the exhortation given by Cardinal Schönborn as the “interpretive key” to the text.

For me Amoris Laetitia is, first and foremost, a “linguistic event”, as was Evangelii Gaudium. Something has changed in ecclesial discourse. This change of language was already perceptible during the Synod process. Between the two Synods of October 2014 and October 2015, it may clearly be seen how the tone became richer in esteem, as if the different situations in life had simply been accepted, without being immediately judged or condemned.

And so it seems we have come full circle…

The crisis besetting the Church in our day did not begin with Francis, it simply flourished on his watch like never before; most notably with the publication of Amoris Laetitia – a document cut entirely from conciliar cloth.

The dubia is a good and necessary step toward, God willing, officially putting an end to the Franciscan reign of terror at some point in 2017.

While this indeed gives us something to look forward to, ridding the Church of Francis would amount only to addressing an especially nasty symptom, while the disease itself, Vatican Council II, remains unaddressed.

Given that the overwhelming preponderance of our churchmen – including the authors of the dubia – are willing participants in the conciliar revolution against the Logos, whether in ignorance or not, we can rest assured that the ecclesial crisis will continue post-Francis.

Indeed, it is more likely that the putrid state of the affairs will worsen until such time as the Church is sufficiently brought to her knees to fulfill the request of Our Lady of Fatima at long last; at which point we can well expect Heaven to respond with the outpouring of grace necessary to quell the conciliar uprising once and for all.

Our identity is Catholic first