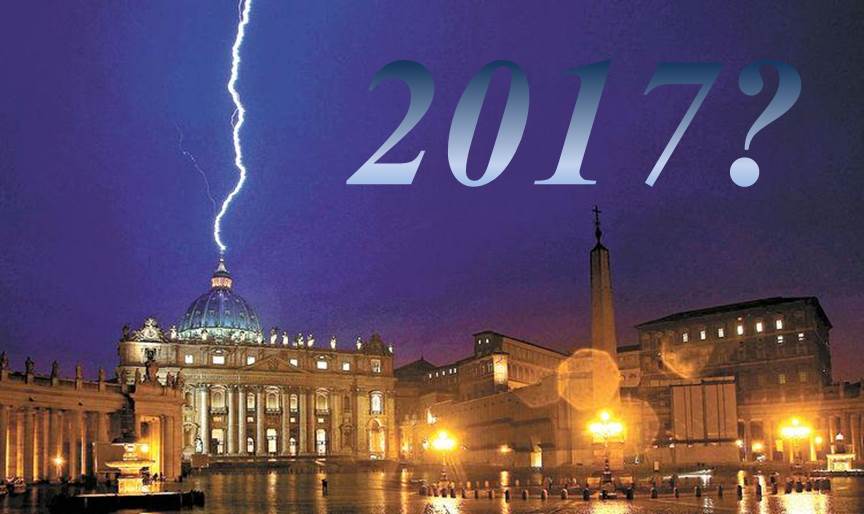 Three months ago today, the now-famous dubia wherein four high profile cardinals dared to ask the Bishop of Rome to confirm his brethren in the faith (the sacred duty of every pope) was delivered to Francis.

As of this writing, he has offered no “official” response to this request, and yet one is hard pressed to deny that he most certainly has given his answer. If he were an honest man, it would look something like this:

I, Francis, refuse to uphold the immutable doctrines of the Faith as taught with Divine authority by the Church as based upon Sacred Scripture and Tradition, but rather fully intend to continue moving forward with an agenda fashioned according to my own personal preferences.

Sure hindsight is always 20/20, but who can possibly be surprised?

We now know that even before he was introduced to the world as Francesco on 13 March 2013, Jorge Bergoglio was insisting upon his personal preferences just behind the loggia doors. From his beat up shoes and plain vestments, to his chosen place of residence and means of transportation, this entire gig has been all about him from moment one.

While the Bergoglian humility-on-display (otherwise known as pride) extravaganza was initially considered charming by some, the blasphemy and heresy contained in Amoris Laetitia is another matter altogether.

Even many of the neo-conservative conciliar cheerleader types (aka the “Ratzingerians” with Cardinal Burke as their de facto leader) now seem resigned to the fact that, for the good of souls, Francis must be pressed in such a way as to facilitate either his (miraculous) conversion or his formal deposition.

This, in fact, is the very reason for the dubia. It is not, properly speaking, an attempt to seek clarity; it’s truly nothing less than an effort to rid the Church of a diabolically influenced madman.

Unfortunately, there is no precedent. We are, therefore, left largely to speculate. Given that New Year predictions are something of a time honored (even if pointless) custom, I offer here what I tend to think will happen moving forward:

Before the “formal act of correction” that Cardinal Burke promised is issued, I suspect that Cardinal Muller will, in his capacity as Prefect of the CDF, answer the five questions posed in the dubia in the only way they can be faithfully answered; i.e., in precisely the exact opposite way in which Francis would answer them if forced to do so plainly.

Yes, I know… In a previous post, I said that Muller and Francis are “birds of a feather” in their refusal to uphold the Faith, but in thinking this over a bit more, I have a sense that Muller will eventually provide the necessary responses while citing his sacred duty before God.

It may well be that his recent interview suggesting that he has been instructed not to answer the dubia was more about revealing Francis’ guile than it was meant as a pledge that he will not answer.

In any case, following Muller’s response (should that happen) the formal act of correction will be issued.

At this point, the real fireworks will begin…

Many more bishops and cardinals will publicly declare their allegiance, either to Francis or to Christ – and make no mistake, that’s the choice.

The majority of clergyman, however, will likely be content to hold their cards close to the vest; waiting to see in which direction the winds are going to blow.

At this point, regardless of how they respond moving forward, these men will have revealed themselves as mere hirelings who care not one whit for their flock but only for themselves. Make note of their names and remember them. It will be helpful moving forward…

In his interview with Edward Pentin, Burke said:

“It is the duty in such cases [the Pope teaching grave error or heresy], and historically it has happened, of cardinals and bishops to make clear that the Pope is teaching error and to ask him to correct it.”

With this in mind, following the act of correction, it would seem that we can expect these same cardinals and bishops to “ask” Francis to correct his errors. I can well imagine that this request will include a specific deadline, and may even indicate the consequences should he fail to do so. More on that in a moment.

Francis will be forced at this point, if not by circumstances then by pride, to respond. The prelates who aligned themselves with Francis will also begin to press him for a firm response; in this case, denouncing the others. Silence and shiftiness will no longer be a viable alternative.

Now, about those consequences…

Barring an explicit act on the part of Francis to accept the correction and to renounce the blasphemies and heresies in Amoris Laetitia (i.e., a miracle of conversion), a formal declaration should be made warning the faithful (specifically, those who had not the wherewithal to realize as much already) that Bergoglio is a heretic that must be avoided.

From here, the picture gets even muddier still.

Will the “good guy” cardinals have the wherewithal to assemble in conclave to elect a new pope? How many of them will there be?

What will the elephant in the room – you know, the guy who now considers himself the Pope Contemplatus – do?

Will he continue supporting the heretic Francis? Will he defend the true doctrine of the faith? Will he further cement his shameful place in Church history by attempting to remain neutral?

Will we have three men claiming some share in the Petrine Ministry? Will Benedict die before this can happen? (Not to be rude, but that would be a blessing.)

Needless to say, many more questions exist at this point than answers.

Regardless of what will take place in 2017 with respect to dubiagate, I for one am looking forward to it happening. The status quo is simply unbearable, and with every passing day, more and more souls are put, and left, at risk.

So, what are your predictions?

A Priest Speaks From His Fatherly Heart

Michael Voris sees the light? Not so fast…