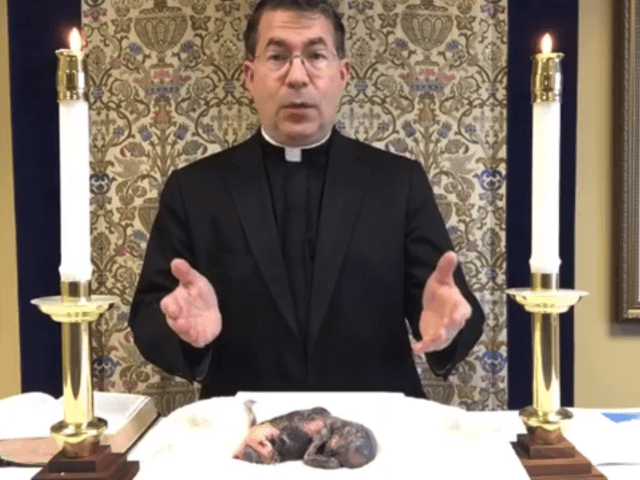 Father Frank Pavone, head of the controversial pro-life group Priests for Life, came under fire Monday for a video of him [posted at PFL’s Facebook page] standing behind an altar with an aborted baby in an effort to support Donald Trump.

Among those who saw fit to criticize Fr. Pavone’s video, which has since been posted to YouTube, was a spokesperson for the Archdiocese of New York.

Ed Mechmann, director of public policy for the Archdiocese of New York, said the use of an aborted baby ‘as a prop’ is ‘absolutely appalling, and deserves to be repudiated by all of us who consider ourselves to be pro-life in the fullest meaning of that word.’

Get that? “Pro-life in the fullest meaning of that word…”

No surprise here. The Archdiocese of New York is, after all, under the leadership of the glad-handing buffoon Timothy Dolan who recently yucked it up with Hillary Clinton at last month’s Al Smith fundraising dinner; just as he did four years ago with Barack Obama.

Pavone is also coming under fire, however, from some “conservative” Catholics who, although they number themselves among the pro-lifers, are outraged by what they consider the sacrilegious misuse of an altar.

I believe that Fr. Pavone is to be commended for providing a stark image of a dreadful reality that far too few among us appear willing to acknowledge.

Consider, for example, the godless leftwingers (Democrats, here in the U.S.) who consider themselves intellectually superior to people of faith.

These are the sort that claim to place all of their confidence in “science” alone (which just so happens to consist in the observation of objective reality), and yet are Hell bent and determined to close their eyes to any evidence that might suggest that unborn children are none other than defenseless human beings and not simply “blobs of tissue.”

That said, what I mainly have in mind is another kind of denial; one that is every bit as diabolical and dangerous.

You see, it seems to me that Fr. Pavone, even if only inadvertently, made a brutally honest statement in his controversial video; one that no doubt escaped the notice of those who most need to hear it.

As I’ve written in the past (and invite you to read once more), the mission of Priests for Life, in spite of its Catholic-sounding name, isn’t being approached as that which is part and parcel of the mission of the Church; carried out in adoration for her Founder and Head, Jesus Christ.

Rather, its mission flows directly from the tenets of a false, anthropocentric religion, Pro-Lifeism, and the worship of its false god; the human embryo.

If that seems a bit harsh, consider Fr. Pavone’s praise for Amoris Laetitia – a text that blatantly blasphemes Our Lord while shamelessly disseminating heresy and leading souls to Hell:

The document is a beautifully written pro-life affirmation of the Church’s wisdom … In clear language, Pope Francis speaks of the great value of the embryo and his worth, starting at conception and regardless of the circumstances in which he or she was conceived.

This, my friends, is precisely the attitude of Pro-Lifeism; a movement wherein the human being takes priority over Christ, and the Sacrifice of the Cross plays second fiddle to the immolation that takes place via the scourge of abortion.

Surely this describes, not just Priests for Life, but many other ostensibly Catholic pro-life organizations that are singularly ordered toward securing temporal life for human beings until such time as either birth or natural death occurs; with little apparent concern for the mission that was given to the Church by Christ.

Don’t get me wrong; Catholicism goes hand in hand with such activities as defending the unborn and offering charitable assistance to pregnant women in need. Being a Catholic necessarily means being “pro-life;” however, and this is important – in that order.

This does not, however, describe the priorities of Priests for Life.

As such, it is only fitting that Fr. Pavone should place a human being, the true object of veneration for the practitioners of Pro-Lifeism, on an altar where one might otherwise reasonably expect to find Our Lord Jesus Christ.

Not just any altar, mind you, but on a Novus Ordo altar, which is not to be confused with the Altar of Sacrifice upon which the Most Holy Eucharist is confected during the Traditional Latin Mass.

Indeed, these two altars are as different from one another as the rites that make use of them are disparate in themselves.

The traditional Mass and the sacred signs therein communicate very clearly and without ambiguity that the sacred rite consists in the propitiatory Sacrifice of Jesus Christ and the worship of the Divine Majesty that poor sinners like us make our own through, with, and in Him.

It is with this in mind that the altar was well described by Geoffrey Webb in his 1933 masterwork, in part, as follows:

Not only does [the Church] consider [the altar] the central focus of the whole liturgy, the raison de’être of the building in which it stands; not only does she indicate that the church exists for the altar, rather than the altar for the church; not only does she look upon it as the sacrificial stone, upon which Christ, our Priest and Victim, offers Himself daily in His Eucharistic Sacrifice, which is the central act of her liturgy; but she has proclaimed again and again that in her mind the altar represents her Lord Himself. He is Altar, Victim and Priest; and the reverence for the altar, expressed in the restraint and dignity of its design, symbolizes the reverence due to Christ Himself. (The Liturgical Altar, Romanitas Press)

The altar is so entirely central to the traditional Mass that Webb could go on to say:

He is Altar, Victim and Priest; and the reverence for the altar, expressed in the restraint and dignity of its design, symbolizes the reverence due to Christ Himself. (ibid.)

Martin Luther – leader of the Protestant revolt (and hero of Jorge Bergoglio) – had other ideas.

He hated the Mass. He despised the priesthood. He called the Offertory “an abomination” for the simple reason that it “smacks of sacrifice.”

Now, let’s be honest; there’s a reason protestants are so much more comfortable at the Novus Ordo than they are at the traditional Mass; the rite was crafted very specifically with this intention in mind!

This is why so many of those ancient elements that point to the Mass as true Sacrifice, its propitiatory nature, and the unique identity of the priest as he through whom the High Priest acts in persona Christi (e.g., the Offertory, the priest’s Confiteor, the Placeat tibi, just to name a few) were unceremoniously stripped from the traditional Mass to create it.

What remains is a rite the outward signs of which are unduly man-centered, and this includes the replacement of the Altar of Sacrifice with something that resembles a common table built for mere human activity.

All of this having been said, it seems to me that Fr. Pavone provided a great service in making use of an altar as he did – the picture worth 1,000 words that he painted demonstrating a most unfortunate truth:

Both the Novus Ordo Missae and the Catholic pro-life movement have largely supplanted the timeless Sacrifice of Christ, the primacy of Divine worship, and the mission that Our Lord gave to His Church in favor of earthbound activities that are focused almost exclusively on the temporal state of the human person.

COMING SOON: Conference under patronage of St. Carlo of Bologna!

Grease for the Synod skids?